We hear technology is advancing at an ever-increasing rate.

We also know it is extremely difficult to predict which technologies and companies will blossom and/or fade.

Comments by some leading technology gurus are examined. 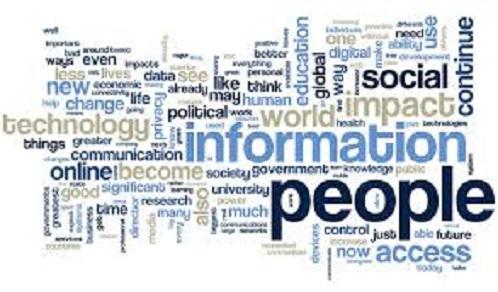 We hear endlessly that technology is advancing at an ever-increasing rate. But for the most part, we just plod along in our current life paths. Thinking back, I remember learning how to use a slide rule and typing my college thesis. At the University of Michigan, I punched cards and then handed them through a window to be loaded into an IBM 1080. And then in the early days at DAI, we had a typist who was error-prone. So we got her a Selectric II typewriter with correcting tape. We knew something better was needed, so I purchased a Kaypro 2 using a CP/M operating system. 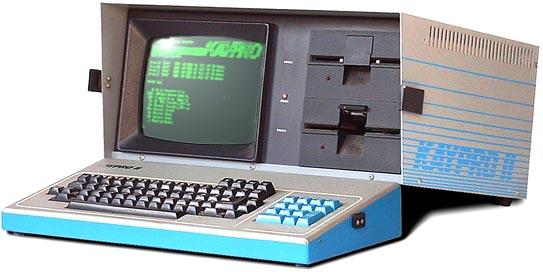 I remember the early success of the Wang word processors. They were installed throughout government and businesses. But Wang could not see that personal computers using a new operating system were on the horizon. IBM (IBM) also did not see what was coming. IBM paid Microsoft (MSFT) to develop the PC-DOS operating system for it. The company then made the mistake of allowing Microsoft to use the same operating system renamed MS.DOS for its own activities.

The McKinsey Global Institute [MGI] was established in 1990 by McKinsey & Co. (management consulting firm w/revenues of $8 billion annually) to develop “…a deeper understanding of the evolving global economy.” A lot of their work has been speculations on current and upcoming technological changes. Some of its staff recently participated in a discussion on what automation may or may not change, co-hosted by MGI and the Stern School of Business at NYU. In what follows, I have extracted and discussed statements by some of the participants.

Susan Lund: "With today’s technology, roughly half of the tasks that people do can be automated. That’s a staggering figure. But just as interesting, and maybe even more important is that only 5 percent of jobs can be entirely automated."

Elliott: I am not sure why it is so important that only 5% of jobs cannot be entirely automated. Just consider what is left! We see the effects of technology change taking place in almost all sectors. It is not just manufacturing. Most service sectors are also changing dramatically. In buying a house, a car, or insurance, the role of the salesman has been dramatically reduced. You can obtain quotes with useful supplemental information on the Web. The only things I now buy in stores are food and gas. And with Amazon’s (AMZN) purchase of Whole Foods (WFM), one has to wonder how much longer we will buy food in markets. Amazon’s supply and shipping systems should allow it to deliver fresher food than most of what comes to us via supermarket chains. And on gas, it appears we are going to all-electric, meaning we will be able to refuel by “plugging in” at home.

As noted in an earlier piece, it appears indoor shopping malls will survive. They will survive not as places to shop but as recreation centers. And think about the delivery of health services: in some fields, doctors can diagnose and operate remotely using commands to a “robot” doing the surgery.

The changes described above are seen in manufacturing – employment down 30% since 1990. And despite the US President’s assertions to the contrary, those jobs were not lost because of out-sourcing. Another McKinsey study concluded “Trade and outsourcing explain only about 20 percent of the 5.8 million manufacturing jobs lost during the 2000-10 period; more than two-thirds of job losses can be attributed to continued productivity growth, which has been outpacing demand growth for the past decade.” 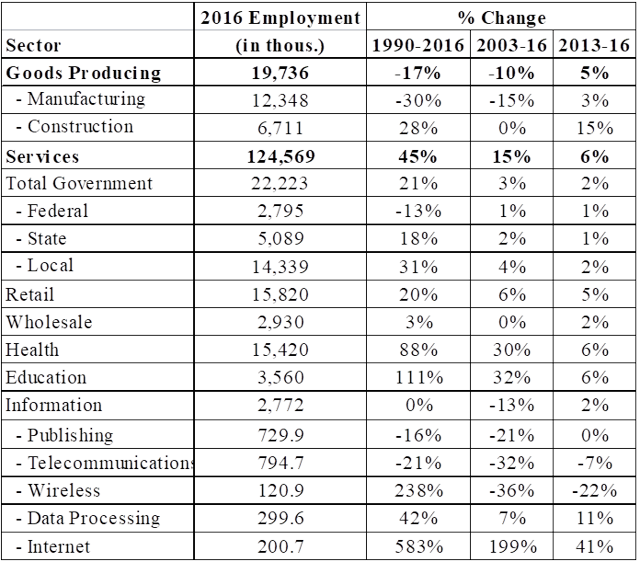 However, from what was described above, the numbers in some of the serve industries should be declining. But they are not. Retail and wholesale trade are still growing. Employment declines can be expected in education as the great online possibilities are developed. The information sector employs relatively few people, but this sector is driving much of the technology change taking place. Data show the dramatic decline of publishing. And the decline in telecommunications is a testament to the declining use of landline phones. The decline in wireless reflects the capital intensity of the sector. And the growth in data processing and Internet employment is consistent with our qualitative understanding of what is happening.

Michael Chui: "One thing that we should be worried about is whether we can adopt automation quickly enough. What we know is, because of demographics, because of aging, we simply don’t have enough workers, won’t have enough workers going forward, to have the type of economic growth that we want. To be able to continue to grow GDP per capita for countries, we actually need the machines working alongside human beings. That means, in order for the economy to grow, we need to make sure that we develop and adopt all of these technologies and make sure that people are working so that the next generation will have better lives than we do."

Elliott: I have heard this argument about a diminishing work force constraining growth before. I don’t buy it. Partly as a result of technological advances people are healthier and live longer than they used to, meaning they can work longer. Globally and in the US, the labor supply will not constrain economic growth.

2. The Nature of Work

Vasant Dhar: “I worry that this time might in fact be different because we haven’t had intelligent machines in the past that we could trust with making decisions. That was in the domain of human beings. Machines assisted us. They helped us. But it’s different this time. And it’s going to be very challenging.”

Elliott: My interaction with intelligent machines has not been all that convincing. Google Maps, MapQuest and GPS rarely get me where I want to go.

Arun Sundararajan: “…digital technology is changing how we organize work. It’s taking us from full time employment, which was the predominant way of earning a living in the 20th century, toward a wide variety of non-employment work arrangements.”

Elliott: One would think that not having to commute to work for a 9 to 5 job would be a boon for most workers. However, most people like structure, suggesting that what is coming will threaten many.

Michael Chui: “It’s clear from our research, but also just looking at history, that people increasingly, over time, will have to be complements to the work that machines do. Work side by side or work with machines…. Even if you’re on a shop floor or a factory floor, you’re seeing these robots, which are now safe for humans to work alongside. Whereas traditional, industrial robots are confined to cages because they’re incredibly dangerous machines."

Elliott: Interesting point about earlier machines being dangerous. Think of the large number of tractor injuries that still occur.

Michael Chui: For certain, these technologies are going to displace human labor. They’re going to start doing things that people used to do. And what’s incredibly important again, number one for the individual workers because they need to be able to have meaningful work, but secondly, even for the overall macro economy, we need to be able to redeploy that labor. We talk about mass redeployment rather than mass unemployment. That’s a tremendous challenge. How do we make sure that we find new things for people to do, be able to pay them to do it, and also retrain them so that they can do these new activities?”

Elliott: As expressed in an earlier piece, I am concerned over whether there will be “meaningful work” for all going forward.

As noted earlier, the outcomes of major technology changes are extremely hard to predict with any degree of precision. Just as Wang did not anticipate personal computers replacing its word processors, nobody thought IBM would lose out to Microsoft in the computer industry. Will solar cells and wind turbines be in use a decade from now? And while Amazon and Netflix (NFLX) are investors’ favorites right now, they are in very competitive industries with new technologies being introduced at an accelerating pace.

Predicting technological futures is a tricky game with big time winners and losers.

Follow Elliott R. Morss and get email alerts
+
Add a comment
Disagree with this article? Submit your own.
To report a factual error in this article, click here.
Your feedback matters to us!