The major averages have buckled slightly as concerns surrounding the continued breakdown of U.S.-North Korea relations weighed on investor sentiment. While the pessimists on Wall Street have used this to justify a bearish stance, the weight of evidence contradicts their assertions.

The latest wave-making news headline was President Trump's warning that North Korea will be "met with fire and fury" if it continues to threaten nuclear action against the U.S. North Korea's response was that it was "carefully examining" a plan to strike the U.S. territory of Guam. Investors have largely ignored ongoing feud between the U.S. and North Korea, but the latest round of comments held more weight following reports that Pyongyang now has the capability to load their missiles with miniaturized nuclear warheads. The market itself isn't unduly concerned by the threat of an imminent conflict, however, judging by recent market action.

The fear-mongering headlines, though, have been used as a convenient excuse to take some money off the table following the market's most recent run to new record highs. Additionally, the recent weight of earnings-related surprises - mostly negative on Wednesday - suggests that another internal correction is underway. To date, most of the damage has been confined to a few select industry groups, although it has spread to the broader small cap and mid cap stock universe.

Walt Disney (DIS) and Netflix (NFLX) weighed on the consumer discretionary space Wednesday, dropping 3.9% and 1.5%, respectively, after Dow 30 component Disney announced that it will end its distribution agreement with Netflix in 2019 in favor of a new direct-to-consumer streaming strategy. Disney also reported earnings, beating bottom-line estimates but missing on revenues.

Elsewhere on the earnings front, Priceline (PCLN) plunged 6.9% after below-consensus guidance overshadowed the company's better than expected earnings and revenues. The PCLN daily graph (below) is reminiscent of the patterns we saw in many leading large cap individual stocks during the May-June internal correction. It suggests that perhaps the latest market slowdown will once again be contained from spreading into a major broad market decline in the large cap indices, namely the Dow and S&P 500 (SPX). 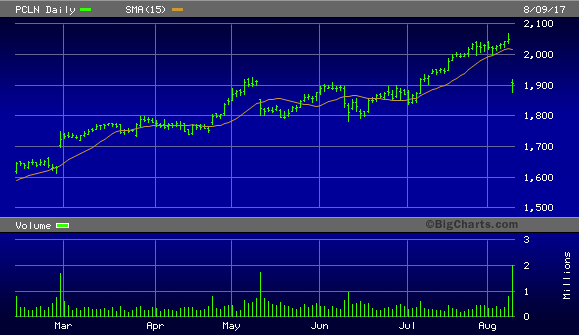 Along those lines, just as the previous internal correction was relegated mainly to the tech sector the current internal correction has so far been relegated mainly to the small caps. Note that the Russell 2000 Small Cap Index (RUT) has shown discernible weakness in recent days and is significantly underperforming the large cap S&P 100 and S&P 500 indices. While there's no guarantee the selling pressure among the small caps won't spread to the rest of the market, there's still a good chance, based on prevailing technical and fundamental conditions, that the SPX will again dodge the bullet with respect to having a serious corrective decline - just as it did during the March-April period of internal weakness. 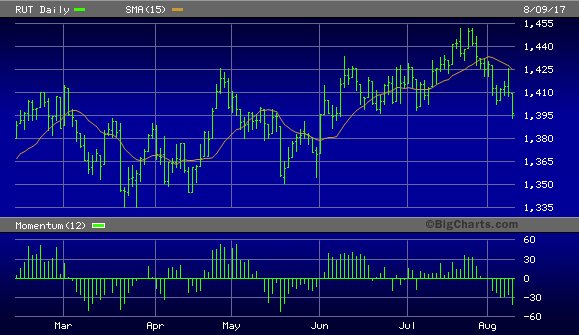 Incidentally, as of Wednesday four of the six major indices - including the NYSE Composite Index and the S&P 400 Mid Cap - had confirmed temporary tops by closing under their 15-day moving average. This doesn't necessarily mean a significant correction is imminent, only that the immediate-term (1-3 week) trend will need to repair itself before the market is ready to make another concerted rally attempt.

Among industries showing pronounced weakness, the following industry indices and ETFs lead the list: REITs (DJR), Cyber Security (HACK), Retail (XRT), Pharmaceutical (PPH), and Oil & Gas (XOP). While the temptation to catch the proverbial "falling dagger" is always present, these groups should be avoided for now until they confirm a bottom based on our technical discipline. 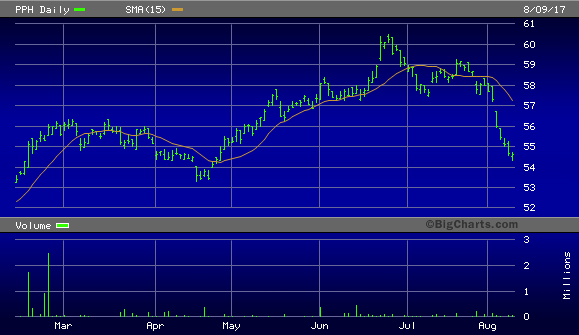 On the other side of the fence, the following are showing relative strength: China (FXI), Emerging Markets (EEM), Financial (XLF), Robotics (ROBO), Home Construction (ITB). 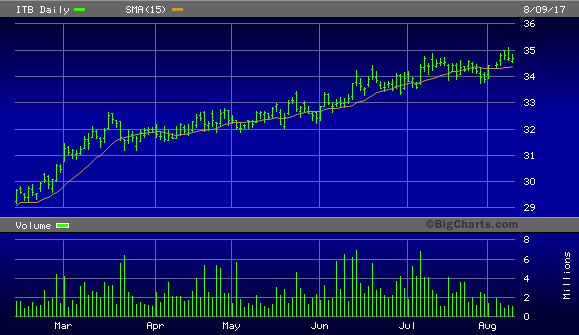 Meanwhile the number of stocks making new 52-week lows on the NYSE has remained stubbornly above 40 for the past week. On Aug. 9, the hi-lo differential went negative for the first time in several weeks (63 highs vs. 88 lows). This is a sign that internal selling pressure is increasing on a near-term basis, particularly in the natural resource sector.

A quick scan of the new 52-week lows list shows a fair number of energy stocks, but also some REITs, drug stocks, and retailers. The qualitative aspect of the new lows isn't as important as the quantitative aspect, however. It's the total number of new lows that matters most in terms of establishing the market's internal strength. Anytime the new lows are persistently above 40 for more than a week or so is definitely a sign that investors should walk slowly and hold off on initiating new long positions until the new lows dissipate.

Assuming the latest internal correction ends with relatively shallow pullbacks in the large cap indexes, it will confirm that the bull market is not only still alive but extremely healthy to boot. When the bull is healthy it typically "corrects" its excesses and imbalances internally by putting the areas of significant weakness into quarantine, so to speak, in order that the weakness doesn't spread to the entirety of the market. In this manner the extreme weakness manifested in a few individual stocks and industry groups is allowed to bear the brunt of the selling pressure. This in turn allows the rest of the market to escape relatively unscathed.

Moreover, bull market corrections only serve to strengthen the stock market's longer-term "wall of worry." This well-know psychological principle is what allows the market to continue advancing year after year. When the market shows signs of being temporarily overextended and therefore vulnerable to a corrective decline or consolidation phase, the bears begin to growl in anticipation of a major sell-off. This causes short interest to spike, which in turn is used to fuel the rallies which inevitably follow short-term corrections in a bull market. Informed investors know that the market is too fairly valued to allow market declines to get out of hand, which is why they are quick to jump in to buy the dips with both hands. Simultaneously, the bears are caught short and are forced to quickly cover on the way up, which only increases the upside potential of a rebounding market.

The latest internal correction should turn out like the previous ones this year in view of the market's well-established long-term internal momentum, which is determined by the rate of change in the new 52-week highs and lows. The new highs-new lows are among the most important of all tools when it comes to discerning the incremental demand for equities, despite being overlooked by many investors. This is why it's so important that the high-low differential remains positive, as it has for most of the secular bull market which began in 2009. It has remained positive for the vast majority of 2017 to date and so far hasn't given any indication that the bear is lurking.