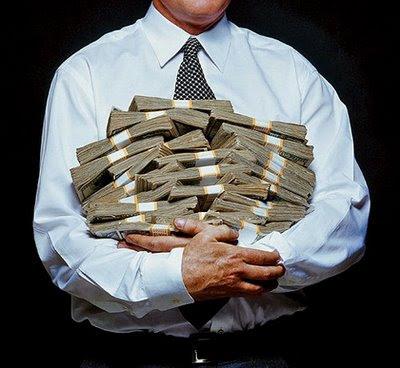 In the capital markets, securing cheap funding is accomplished by selling a low yielding (and ideally a low volatility) instrument and using the proceeds to purchase a higher yielding or a better performing asset. In the foreign exchange market, the dollar is the ultimate funding currency. Americans are the marginal buyer of global equities. They sell dollars and buy foreign equities, and largely on an unhedged basis. Foreign companies and countries borrow dollars and frequently convert the proceeds back to their own currency.

Levered accounts often use the Japanese yen and/or Swiss franc as funding currencies. That is to say, those currencies are borrowed and then sold to buy another asset that is expected generate a higher yield than being paid for the funding. In times of heightened anxiety or a spike in volatility, the trade is unwound, which is to say that the purchased asset is liquidated and the funding is replaced (bought back). That is precisely what appears to have happened last week as the bellicose rhetoric over North Korea escalated. And it was the yen and franc's weakness before the weekend, which we saw as a tell that the market's focus was going to shift away from the Korea story.

If the geopolitical anxiety is easing, and the chances that Draghi breaks new ground at Jackson Hole next week, is it a safe time to look at the funding currencies, and if so, which looks better? To be sure, when a low yielding instrument is sold for an asset that is expected to offer a higher return, it is often called a carry trade. A carry trade is a trade in which one is expected to profit from the interest rate differential. That is the carry.

Moreover, look a bit closer at that carry, 125 bps annualized. That turns out to be about 10.5 bps a month. This year, the dollar has moved on averaging almost 1.3% a month so far this year. On the other hand, the euro rose around 14.5% against from mid-April to early August. The carry earned is overwhelmed by the price appreciation. Some participants may have bought the euro for yen and said it was about the carry, but it was really a momentum trade.

The Swiss franc offers more negative short-term interest rates and is less volatile than the yen. Specifically, three-month franc LIBOR was fixed at minus 72.5 bps today. Three-month yen LIBOR was fixed at about minus three bps today. Three-month implied volatility is 7.5% annualized for the Swiss franc and 8.7% for the yen. Both countries are experiencing little price pressures. Japan's July headline CPI was 0.4% year over year, while Swiss inflation was 0.3% (0.6% in the EU harmonized methodology). The Swiss economy growth is weaker but less volatile than Japan. Japan's economy grew 1.0% in Q2 after 0.4% growth in Q1. The Swiss economy grew by 0.3% in Q1. When it reports Q2 GDP in early September, it is expected to have risen by around 0.5%.

On balance, these fundamental considerations suggest that the Swiss franc may be a better funding currency now than the yen. Technical considerations suggest some caution. The franc has depreciated by around 5% against the yen between July 10 and this past Monday. This left the technical indicators a bit stretched. Yesterday's big advance of the franc over the yen helped lift the RSI, and the Slow Stochastic has already turned up. Minor bullish divergences are evident. The MACD looks poised to cross higher before the weekend.

Marc Chandler
15.13K Followers
Marc Chandler has been covering the global capital markets in one fashion or another for 25 years, working at economic consulting firms and global investment banks. A prolific writer and speaker he appears regularly on CNBC and has spoken for the Foreign Policy Association. In addition to being quoted in the financial press daily, Chandler has been published in the Financial Times, Foreign Affairs, and the Washington Post. In 2009 Chandler was named a Business Visionary by Forbes. Marc's commentary can be found at his blog (www.marctomarket.com) and twitter www.twitter.com/marcmakingsense
Follow