As if in response to North Korea's latest ballistic missile test over the Sea of Japan, the Bank of Japan (BOJ) launched its own retaliatory strike with an extraordinary $2 billion buying spree of Japanese equity ETFs over the course of the week (see green candle volume measure in Figure 1, below). By the 15th of August, the Tokyo Stock Exchange (TOPIX) had jumped 1.40%. Sony (SNE) was up 1.28% over the buying period and is up 38% through yesterday's market close (16 August). Nippon Telephone and Telegraph (OTCPK:NTTYY) is up 14% year-to-date (YTD). Exchange traded fund Aberdeen Japan Equity (JEQ) was up 1.41% after the spree and up almost 17% on the year. I-Shares Japan (EWJ) is up almost 11% on the year. The BOJ now owns an estimated $127 billion in Japanese equity ETFs since the start of its direct share-buying program in April 2013. The BOJ is now on pace to own about 3.2% of the total market value of the TOPIX over the course of the coming year in its ¥6 trillion ETF purchase program. ETF exposure to the TOPIX continues to be a robust-and well-backstopped investment. 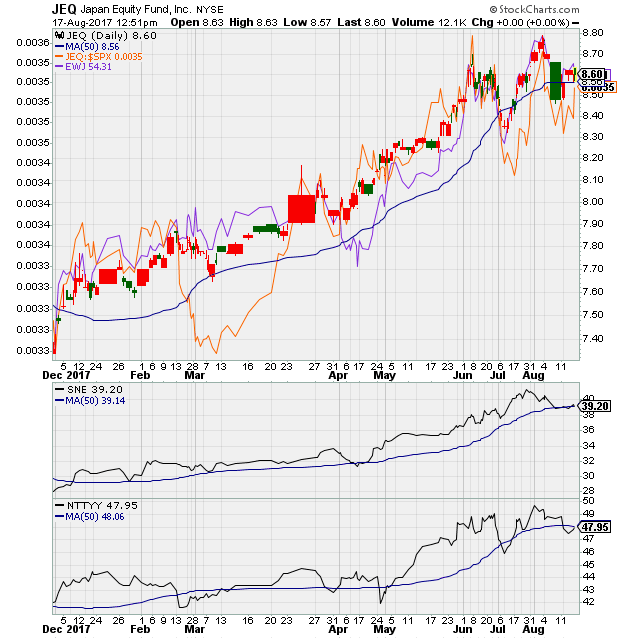 The BOJ mandate that allows the bank to purchase shares on Japan's leading exchanges in unique in the developed world, which brought to life in an unspectacular fashion a trading strategy that is not difficult to grasp. Short-term speculators simply buy in front of the one-off BOJ purchases in the early morning hours and sell just before the closing bell, pocketing the oft-times hefty difference in price given the BOJ's average ¥70 billion trading range. The graphic visual created is much like that portrayed in Figure 2 below, where the eye can readily discern the rapidity of buying and selling-all creating a decidedly upward trendline for the period-despite the otherwise subdued Japanese trading volumes of non-targeted market sectors. All the while, both JEQ and EWJ have maintained a positive pace relative to the S&P 500 over the period. 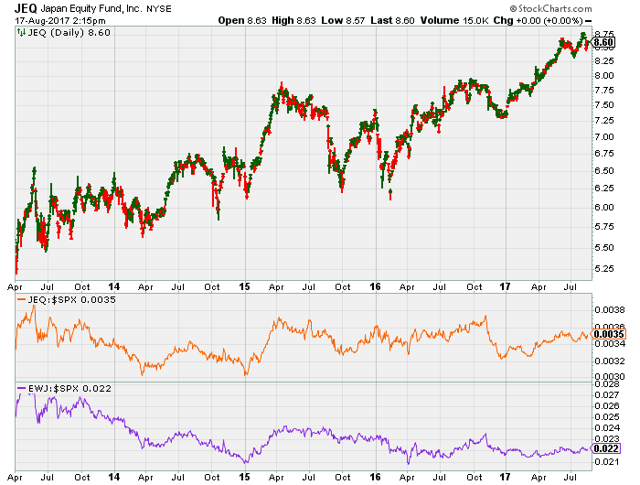 Meanwhile, the BOJ has meticulously steered the yield of the 10-year Japanese government bond in a southerly direction buying up billions of yen worth of debt, literally flooding the market with liquidity in the process. The BOJ now owns roughly 40% of the estimated ¥1.1 trillion of outstanding government debt, sending borrowing costs to historic lows. Since September, the BOJ has done one measure better on the volatility front by kept the 10-year yield at roughly zero, buying when the yield rises above zero and selling when the yields below zero. The BOJ has literally guaranteed both price and yield across much of the yield curve while assuring Japanese households and corporations the lowest borrowing costs in the developed world for the foreseeable future (see Figure 3, below). The lack of volatility in Japanese government bonds across the yield curve means little profit to be had by fixed income traders.

With the incredible level of monetary firepower unleashed by the BOJ over the past five years, the Japanese economy is finally making measurable progress on a variety of fronts. The economy grew at an annualized rate of 4% through the end of June, the highest rate in the developed world for the period and the longest uninterrupted growth streak in 11 years. Consumer spending soared 3.7% annualized in the 2nd quarter, according to government data. Whether such a level of spending is sustainable, however, remains an open question given the fact that wage growth actually fell 0.4% over the period-all while the ratio of open jobs to applicants in Japan hit 1.51 in June, the highest post since 1974. The ratio for regular job openings went to a ratio of 1.0 to 1-the highest post since 2004 when the measure was officially first collected and archived. The regular jobs to applicant ratio suggests that the shortage in applicants extends well beyond part-time to salaried positions in the greater labor force. The unemployment rate through the end of the 2nd quarter stood at 2.8%, a 21-year low. At the same time, Japan's working age population peaked in the mid-1990s by most estimates while the country has a history of permitting little in the way of immigration into the country. That Japanese companies often replace retiring salaried workers with part-time at lower with lower wages and benefit packages, further depresses wage growth across the economy.

Price inflation remains feeble at 0.4% through the end of June YOY as domestic retail companies mostly eat what price increases that are passed down supply chains out of fear that consumer spending would drop even further if real costs were passed on to the end user of domestic goods and services. With consumers essentially keeping a lid on domestic prices-the deflationary mindset-growing inflation becomes difficult to sustain to the chagrin of the BOJ. Consumer purchasing power actually increased during the 2nd quarter as a result.

Inventory spending remained flat while corporate investment surged by 10% for the period, with the help of some of the world's lowest borrowing costs as further automation, rather than investment in human capital appears to be an ongoing goal. Public spending, largely social safety-net spending in a country where adult nappies vastly outsell those geared for infants, was up 22%. The BOJ continues to underwrite much of this spending through its asset purchase program-spending that will likely continue for the foreseeable future.

Figure 4: The Yen and the Dollar 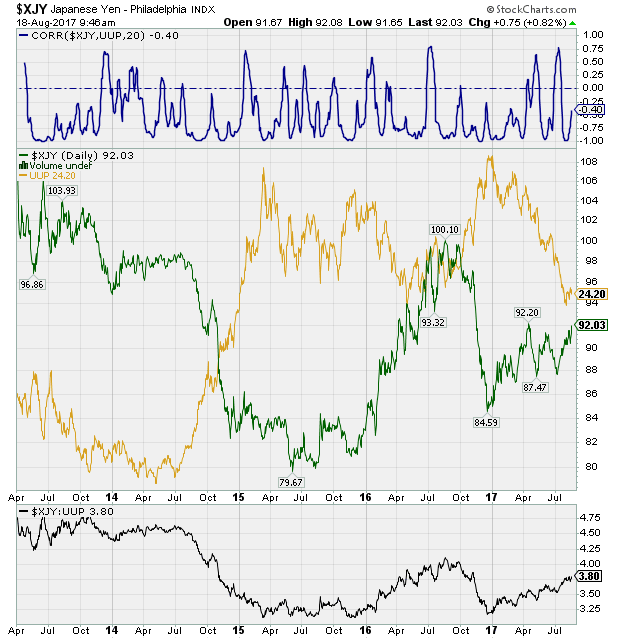 The final consideration is forex. The correlation of the yen to the US dollar has been largely negative for much of the period as well as YTD except for several prominent spikes into positive correlation territory during the month of April, as Figure 4 aptly displays. The strength of the yen through the end of 2014 proved unsustainable as the dollar reasserted itself on world currency markets just at the time when Western Texas Intermediate crude prices peaked at $107.26 in June of 2014. The US dollar retained its relative strength through much of 2015 and charted even higher levels with the upset win by Donald J. Trump in the US elections, peaking in the second week of December at its highest post of the period. The yen beat a rather similar path through much of 2016 before falling off dramatically in the wake of the Trump victory, as the presumed reflation of the US economy dominated the thoughts and expectations of investors worldwide.

The legislative challenge of repealing the Affordable Care Act in both the House and Senate abruptly sucked much of the wind out of the market's reflation sails as progress on health care, tax reform and infrastructure has all but stalled. The fallout from Charlottesville will wash over into the rest of what's left of the Trump agenda in the weeks and months to come-with unknown economic impact. Early on, chief executives were eager to join the President's various advisory councils in hopes of guiding administration policy on financial deregulation, tax reform and infrastructure spending. In the wake of Charlottesville, that cost and benefit equation has fundamentally changed. Under the threat that these same chief executives might resign en masse, the President quickly disbanded his advisory councils. The generals he so outwardly reveres were quick to condemn the themes of hate. For their part, the leaders of his own party, those very people that largely control the fate of the administration's legislative agenda, fell numbingly silent. The moral compass used so effectively by Franklin Delano Roosevelt to steer the country through the darkest times of economic want and wartime grief was nowhere to be found. Meanwhile, the dollar and the yen are headed for parity from very different directions in the not too distant future (see Figure 4, above).

Japan is one of the few developed economies where extraordinary monetary policy initiatives will continue for the foreseeable future. Inflation measures remain tepid in Japan, not unlike similar measures throughout much of the developed world-with perhaps headline inflation in the UK being the lone exception. Yet after two decades of chronically falling prices coupled with the seeming unwillingness of domestic business to increase the pay packets of part-time, almost a third of the workforce, and now salaried workers, the Japanese consumer remains unsurprisingly cautious. As a consequence, the BOJ will continue to scan the economic horizon for traces of inflation, while pumping extraordinary levels of liquidity into the financial system to the fullest extent of its governing mandates. Japanese borrowing costs will remain some of the cheapest in the world as both domestic and foreign investors alike make full use of the resulting arbitrage opportunities. The level of distortion wreaked on Japanese markets by these BOJ initiatives falls to a distant tomorrow somewhere in the future. For today, the BOJ struggles while investors profit.

Disclosure: I am/we are long JEQ. I wrote this article myself, and it expresses my own opinions. I am not receiving compensation for it (other than from Seeking Alpha). I have no business relationship with any company whose stock is mentioned in this article.