Football season is kicking off! So starting opening day (September 7th) the ADS ARE COMING!

Sponsorships in the NFL are big business, in 2016 sponsorship revenue generated $1.25 billion for the year. That was a 4.3% increase over 2015 despite NFL ratings issues (source). Spread out, $1.25 billion was spent over 256 games in regular season and then playoffs.

Who is spending this money?

Would it be a surprise if I said the beer industry spent the most money on NFL sponsorships in 2016? Led by Anheuser-Busch (BUD), beer companies spent 5.5 times more on NFL properties than the average sponsor during the 2016-2017 season according to IEG research.

The second largest category was the auto-industry with new NFL sponsor Ford (FORD) helping out. Ford becoming the official truck of the NFL.

To give you an idea of the companies sponsoring the NFL. 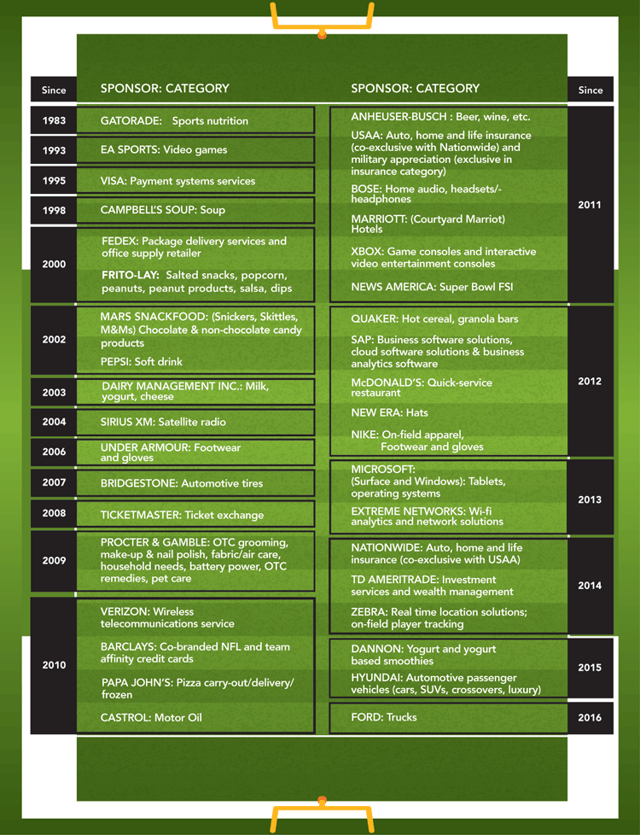 How does Advertising help these companies?

The 185 million fans of the NFL is the kind of audience that any brand would want to influence. So much so that the NFL can charge big bucks to tap the audience.

Stock Price too is affected

Researchers at the University of Connecticut published a paper called the "Critical Finance Review" that discovered up to a 127 basis point abnormal return for sponsors of winning NFL teams. They reviewed 3,399 games between 1997 and 2013 studying the stock of stadium sponsors. As of 2013, 62% of team's stadiums in the four major US league sports (football, baseball, basketball & hockey) were sponsored by publically traded companies.

The study found that a stadium sponsor traded 50-80 basis points higher after a win than a loss in the next trading day and that stock increase held over the next few days.

“Outcomes of NFL games could serve as a reasonably exogenous instrument for investor sentiment,” is the conclusion drawn by the researchers, Assaf Eisdorfer, a finance professor at UConn, and Elizabeth Kohl ’15 Ph.D. (source) 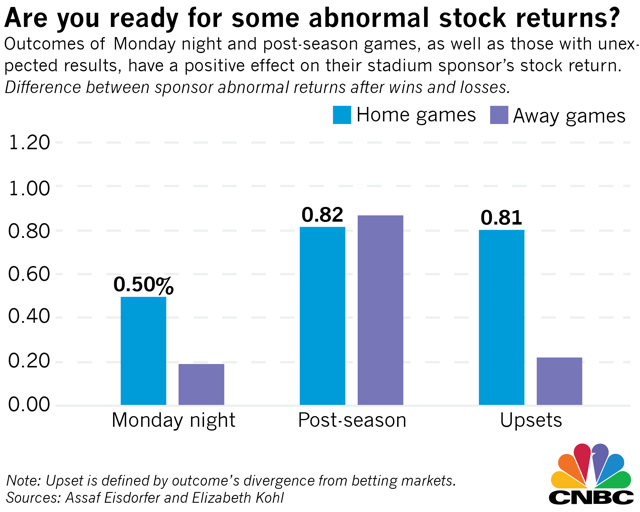 NFL Sponsors have exclusive rights in the NFL world, but other companies can still run ads during commercial breaks. That's why you'll see Coca-Cola (KO) ads during a Superbowl game even though Pepsi (PEP) is the official sponsor of the NFL.

If you're considering shelling up the millions to run an ad, there's likely a spot. The NFL in 2016 ran nearly 70 (30-second) commercials during the 2016 regular season (source). That is 6 more 30-second commercials or 3 minutes more of commercials than was shown previously in 2008. 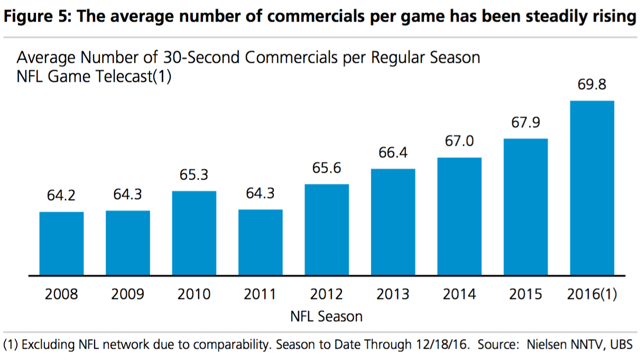 The future of NFL Sponsorships

The future isn't cheap. Roger Goodell, the NFL Commissioner, went on record saying that the NFL expects to achieve $25 billion in annual revenue by 2027 (source). That means if these companies currently sponsoring the NFL expect to continue to reach the growing 185 million fans of the NFL and seeing a surge in their stock price for game wins, they'll have to pay up big bucks.

Andrew Kraemer
29 Followers
Andrew is the founder and finance ninja of the Investing Blog, WalletSquirrel.com. He is a 30-year-old millennial dividend investor and side-hustle entrepreneur.

Disclosure: I am/we are long VZ, MSFT. I wrote this article myself, and it expresses my own opinions. I am not receiving compensation for it (other than from Seeking Alpha). I have no business relationship with any company whose stock is mentioned in this article.