As you can see in my summary, I believe that it may be to invest in the yen - since it's undervalued and it can be used to hedge against a correction in the stock market. If you believe bonds will poor future returns that may also be another reason to invest in the yen since the yen tends to appreciate in risk-off periods.

As you can see below, the USD (using Proshares US Dollar ETFs as a proxy - which tracks the dollar compared to other world currencies) has had significant downward momentum since about the beginning of 2017. 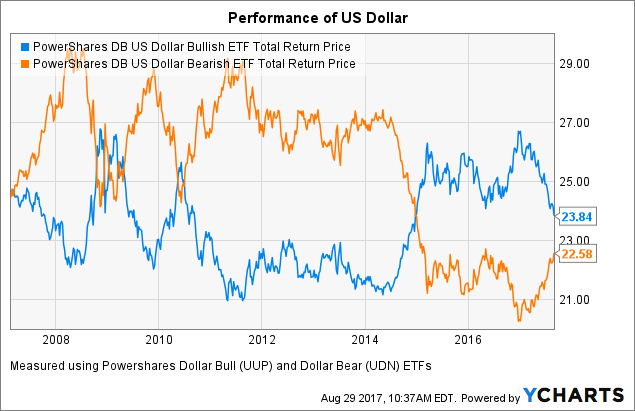 How have foreign currencies performed?

If you look at the returns of foreign currencies (I've used CurrencyShare's ETFs to chart the total returns of cash including interest - although the expenses may cause some tracking error) in relation to the dollar, you can see that they've offered a wide range of returns, and some have had a high degree of volatility. 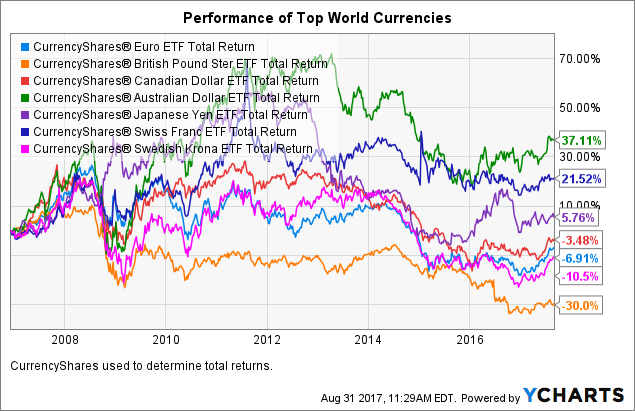 If you look at the chart above, you'll see that the performance of the yen went up to almost 55% from Feb 2007 to late 2011, and after then it's since heavily declined in value - but it's starting to rebound and may be undervalued.

Some investors may be worried that the market might be headed into a risk-off period. Some currencies are stronger during risk-off periods and are regarded as safe havens. During risk-off periods, the yen (FXY) and the Swiss franc (FXF) on average appreciate against the US dollar - researchers (De Bock and de Carvalho Filho 2013) have found these two currencies to be the only one where that happens. 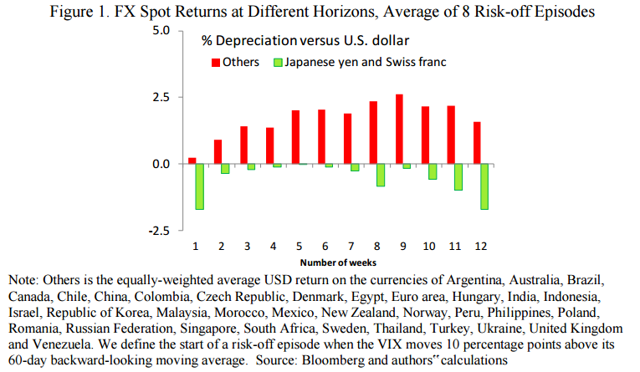 "Using a broad dataset of 32 assets over the period of 1964–2014, we examine the relationship of these assets with the US equity market during financial crises to determine which of them are safe havens for US investors, hedges, or speculations.

US Treasuries and Japanese yen are the strongest safe haven investments in months characterized by large declines in market value or excessive volatility."

The yen was still described to be a safe haven currency even after a rocket passed over it by Mitul Kotecha, head of Asia FX & Rates Strategy at Barclays Plc. Some investors may worry that the US equity market may enter into a correction in addition to the decline of the US dollar and bonds. Since the yen tends to appreciate during risk-off periods, it's a perfect candidate for those worried about equity risks and US dollar depreciation.

Even when there was a Tsunami in Japan the yen still appreciated.

Some explanations for a currency to be safe-haven currency that were given by De Bock were:

In conclusion, if you're worried about a cool down coming to the US equity market as well as the decline of the US dollar you may consider investing in a safe haven currency like the yen or the Swiss franc. The yen is currently undervalued on a PPP basis making it a more attractive pick.

Steven M. Williams
480 Followers
A Canadian. I focus on mostly on non-mainstream ETFs and international economies. Do you have any requests for me to write on unique ETFs or are there any countries that you want me to write a report on? Please let me know, feel free to message me.
Follow

Disclosure: I am/we are long FXF AND FXY. I wrote this article myself, and it expresses my own opinions. I am not receiving compensation for it (other than from Seeking Alpha). I have no business relationship with any company whose stock is mentioned in this article.

Additional disclosure: Make sure to consult with a qualified financial professional before making any investment decisions.