Monday September 11: Five things the markets are talking about

Global equities and the U.S dollar are edging a tad higher this Monday morning, while haven assets retreat, as capital market fears ease about a standoff with North Korea and the impact of Hurricane Irma on the U.S economy.

Nonetheless, North Korea has warned of retaliation if the UN Security Council approves harsher sanctions in a vote later today.

The week ahead will feature an early look at how the eurozone's economic momentum is holding up in Q3, while consumer price data from the U.K and U.S. will show if those countries' central banks are getting any closer to their inflation targets.

The Bank of England (BoE) will hold its monetary policy meeting Thursday, the same day as the Swiss National Bank (SNB) will give its quarterly monetary policy assessment.

The volatile U.S retail sales date will close out the week on Friday giving the market a birds eye view on U.S consuming spending, while in Asia, the market will continue to monitor data from China with key industrial production and retail sales data scheduled. Down-under, Australia will release its jobs data on Thursday.

A weaker yen (¥108.40) boosted Japanese blue-chip stocks. Overnight, the Nikkei rallied +1.4%, after setting fresh four-month lows on Friday and logging its worst week in seven months. The broader Topix gained +1.2% on the lowest volume in a fortnight.

In Hong Kong, stocks rallied the most in a week, encouraged by another case of Chinese state enterprise reforms and Beijing's loosening of controls to curb outflows that underlined rising confidence over the Yuan's value. The Hang Seng index rose +1.0%, while the China Enterprises Index gained +0.6%.

Note: The People's Bank of China (PBoC) scrapped two rules intended to support the yuan, showing that authorities are less worried about yuan depreciation after the currency's recent surge against the dollar.

In China, stocks were slightly higher, led by gains in shares of electric vehicle makers. The blue-chip CSI300 index was unchanged, while the Shanghai Composite Index added +0.3%.

In Europe, regional indices trade sharply higher across the board, led by Re-Insurers, as the impact from Hurricane Irma was less than feared. 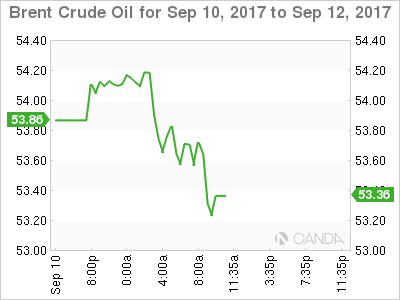 Ahead of the U.S open, oil prices were a tad lower on concerns that Hurricane Irma's pounding of Florida could dent oil demand. However, losses are being capped by weekend talks between the Saudi's and other OPEC members to possibly extend a pact to cut global oil supplies beyond next March.

Note: The market believes that Irma will have a negative impact on demand, but not on processing. Hurricane Harvey and Irma are expected to inflict a bearish shock on oil demand this month of about -600k bpd.

Gold prices are under pressure after hitting it's highest in over a year in Friday's session, as the dollar recovers from last week's lows and as the lack of geopolitical developments dented safe-haven appeal. 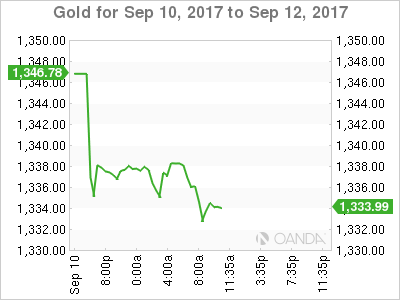 3. Sovereign yields back up

U.S yields are backing up a tad as market concerns about the impact of Hurricane Irma on the U.S economy is decreasing after it hit Florida yesterday with the strength of a Cat 4 storm, rather than a Cat 5 hurricane.

In Germany, Bund yields briefly dipped this morning after comments from ECB board member Benoit Coeure that monetary policy is likely to remain more accommodative for longer. 10-year yields are trading at +0.33%.

Note: ECB President Draghi may have appeared 'dovish' in his press conference last week, but German Bunds also have to deal with domestic 'hawkish' unofficial guidance.

Note: There's a Bank of England (BoE) monetary policy meeting Thursday, and inflation and employment data before that. Governor Carney is expected to hold rates steady despite a potential uptick in in inflation before the meet. 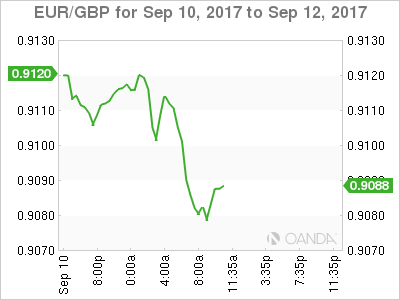 With North Korea not deploying any missiles and Hurricane Irma landing as a Cat 4 storm has had a negative impact on the risk aversion trade.

The EUR/USD continues to hover just north of the psychological €1.2000 handle. The single unit's soft tone has been aided by this morning 'dovish' comments from ECB's Coeure who reiterated that the Council view that monetary policy would likely remain more accommodative for longer.

USD/JPY (¥108.50) is higher as the North Korean missile test failed to materialize for the time being. Reports are also circulating that a UN draft on North Korea dropped its call for an oil embargo of the country.

GBP/USD (£1.3135) is a tad higher ahead of the U.S open. Focus is on U.K's Parliament vote on Brexit repeal bill later today. Brexit Minister Davis warned of chaotic Brexit if Parliament blocked the repeal bill. 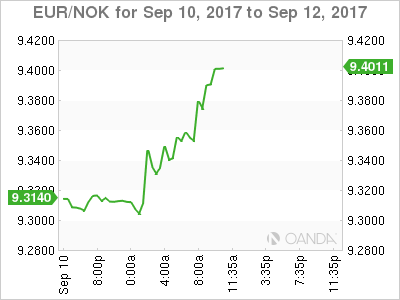 5. Norway goes to the polls

Norway goes to the polls today to decide whether the Conservative Prime Minister, Erna Solberg, or her Labour rival, Jonas Gahr Store, will lead the country for the next four years.

The results for a half dozen smaller parties will be critical.

Dean Popplewell
2.67K Followers
Dean Popplewell has nearly two decades of experience trading currencies and fixed income instruments. He has a deep understanding of market fundamentals and the impact of global events on capital markets. He is respected among professional traders for his skilled analysis and career history as global head of trading for firms such as Scotia Capital and BMO Nesbitt Burns. Since joining OANDA in 2006, Dean has played an instrumental role in driving awareness of the forex market as an emerging asset class for retail investors, as well as providing expert counsel to a number of internal teams on how to best serve clients and industry stakeholders.
Follow
To ensure this doesn’t happen in the future, please enable Javascript and cookies in your browser.
Is this happening to you frequently? Please report it on our feedback forum.
If you have an ad-blocker enabled you may be blocked from proceeding. Please disable your ad-blocker and refresh.