One of the remarkable responses to the 2008-financial crisis was the Federal Reserve cutting its federal funds target rate to an unprecedented essentially 0% and then keeping it at hat level of the duration of the recovery.

The Federal Reserve did this in order to, based on monetary policy theory, spur lending and investment by reducing the yield from low-risk investments.

While normally such an increase is historically not particularly notable for the Federal Reserve, given Federal Reserve policy since the financial crisis in keeping rates essentially nominal for almost a decade, such an action is dramatic.

Normally, raising interest rates would cause both equity prices and in particular bond prices and yields to decrease (NYSE: BND), as the guaranteed rate of return is increased.

Essentially, this means that investors would be more interested in low-risk products, such as money market funds, certificates of deposit, or savings accounts, that would begin to yield higher real returns. Particularly given the country’s still-low inflation, this effect should be even more pronounced.

The resulting flight to nominal-risk assets would cause yields to increase in higher-risk assets, such as bonds. However despite the Federal Reserve’s aggressive hiking this year, we see that bond-yields remain depressed.

This disassociated trend is a worrying signal for the future of U.S. monetary policy and for investors looking for yield in bonds and lower-risk investment vehicles.

Despite the Federal Reserve raising interest rates over the course of this past year, 10-year treasury yields on U.S. bonds (NYSE: IEF) have in fact moved in the opposite direction.

As you can see in the chart below, when the Federal Reserve increased interest rates in December 2015, the 10-year yield dropped dramatically from almost 2.25% in December 2015 to just below 1.5% in July 2016.

As the Federal Reserve began aggressively increasing interest rates in December 2016, the 10-year yield dropped from above 2.5% to now barely above 2%. 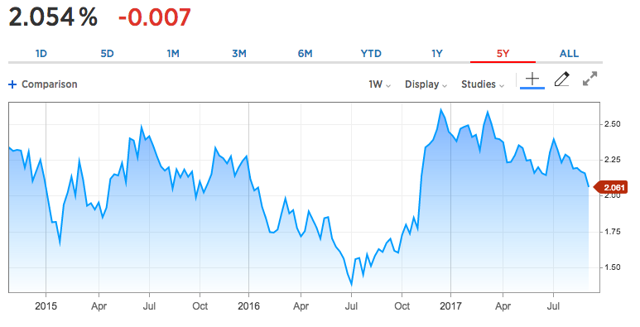 Compare to how 10-year yields moved in response to the Federal Reserve raising interest rates during the 2000’s. 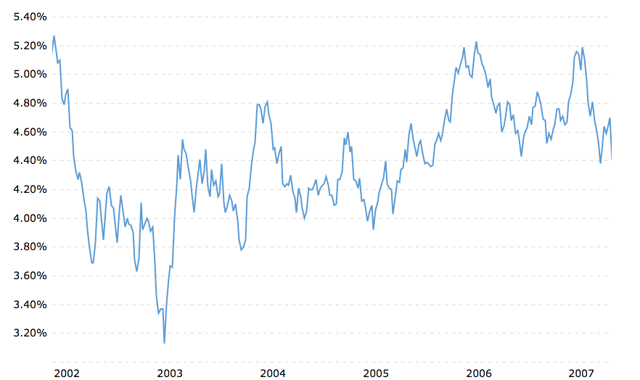 As you can see, when the Federal Reserve began increasing interest rates in the 2000s, bond yields generally moved on a trend with those interest rate increases.

When we look back further into U.S. financial markets history, we see this trend similarly supported as an increase in the federal funds rate is correlated with a soon-following increase in 10-year U.S. Treasury bond yields.

Below is a historical overlay of the federal funds rate to the U.S. 10-year yield.

It is unclear immediately why the Federal Reserve’s monetary policy actions are not having the same impact that they historically have had on bond-yields. While there is normally a small lag, given that the first rate-hike took place already almost 2 years ago and given the consistent rate-hiking now for almost a year, we should begin to see some movement on bond yields.

a. A Temporary Lag in the Bond Market?

Initially, it is possible that recent events in the markets are merely causing a temporary disassociation between the federal funds rate and bond-yields. It is possible that temporary events affecting treasury yields have merely pushed yields lower, such as increased confidence in the U.S. government’s finances and reduced risk of default.

For example, the U.S. government’s risk of default (NYSE: TLT) was perhaps significantly higher back in, for example, 2013, when government shutdowns and debt ceiling brinksmanship, the resulting Treasury Department extraordinary measures to meet debt service obligations, and the consequent unprecedented downgrading of the United States’ credit rating increased the risk of default.

However, such risk of government brinksmanship and gridlock was already reduced significantly prior to the recent downturn in U.S. bond yields. It is possible that other recent events, such as the results of the 2016 election, have caused unexpected events that have swung bond-yields in directions that overwhelm the interest rate increases.

Upon closer examination, we see, though, that the individual events do not account entirely as a possible reason for the overall downward trend of bond-yields after rate increases. These various one-off events cause bond-yields to shift momentarily, but the overall trend seems unrelated to any such factors. It almost seems like bond-rates are decreasing in respond to the rate-increases, which is highly unusual.

b. A Changed Landscape?

Furthermore, equity markets (NYSE: SPY) remain bullish and strong, which is a trend that would normally cause bond rates to increase. This is because as equity markets increase in expected yield and return, bond market yields increase as well due to increased demand for return due to the comparative yield of other asset classes. When equity markets decline, then we expect to see a decrease in bond yields.

The recent disassociation between equity markets and bond yields is a whole other subject, but related in that it shows many of the fundamental assumptions traditionally governing monetary policy and cross-asset correlations are being challenged by recent trends.

It is possible that the events of the past two years are only a temporary volatility glitch and that as the decade moves forward we will see our fundamental assumptions regarding monetary policy and financial markets reaffirmed.

It is also possible that the markets have changed structurally and found a new equilibrium, perhaps due to a loss of investor-confidence in a wide variety of investment vehicles they thought were safe prior to the financial crisis but now have lost confidence permanently in, such as when the $65 B money-market “Primary Fund”, considered an extremely low-risk asset class by traditional metrics, collapsed in the wake of the 2008 financial crisis. We see some indicators of this in how many young people are now avoiding financial products altogether.

It is possible that the recent disassociation between equity markets and bond rates is merely further proof of a fundamental shift in investor preferences.

However, recent trends have shown that the federal funds rate is not as effective as it historically has been in both controlling the equity markets as well as bond yields.

While it remains uncertain whether these trends are merely momentary blips or evidence of a longer-term change in fundamentals, it is worrisome for both investors seeking the return of low-risk yield as well as policymakers whose tools in taming the economy are possibly starting to lose their effectiveness.

Erich Reimer
3.46K Followers
I primarily write on cryptocurrencies and other frontier technology topics. I hosted "Tech Investment Insights" here at Seeking Alpha, exploring emerging technologies with some of the world's most innovative corporate leaders and entrepreneurs. My professional background is in public policy, financial regulation, and the business side of the technology sector. I'm a licensed lawyer in the District of Columbia and the State of New York. I earned my Bachelor's degree from the University of Pennsylvania, to include training at Wharton, and my law degree from the University of Virginia.
Follow

Disclosure: I am/we are long IVV, BND. I wrote this article myself, and it expresses my own opinions. I am not receiving compensation for it (other than from Seeking Alpha). I have no business relationship with any company whose stock is mentioned in this article.