Mr. Saville is correct in that the gold/silver ratio has averaged in roughly the 45-60 range since 1970, as shown in this chart: 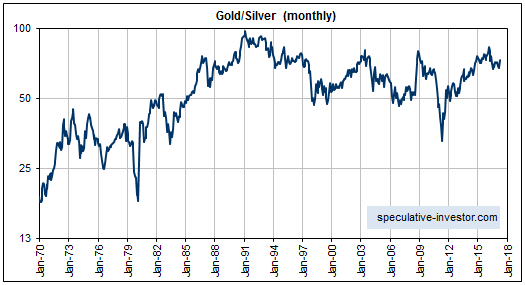 I disagree with him that the ratio will continue to be in that range going forward, especially over the long term, and there are a few reasons why that will be outlined in this article.

In the past, I have published several articles on gold that contain some allegations that well-moneyed players may be using the futures markets to artificially suppress the price of gold. This appears to be happening in the silver market too but to a potentially larger degree.

As is the case in the gold market, the vast majority of silver trading takes place on the futures exchange and does not involve physical silver actually trading hands. This is an important distinction because a futures contract can essentially be created out of thin air - the seller does not have to actually possess the commodity represented by the contract. Instead, the seller merely backs the contract with cash. The same also is true of the buyer. In many cases, the buyer of a silver futures contract has no desire to own the physical metal. Rather, the buyer is simply making a bet that the price of silver will increase over the contract term (or over some shorter time period) and will then receive cash upon the sale or maturation of the contract. The end result of this system is that market participants are able to trade far more silver than what actually exists. 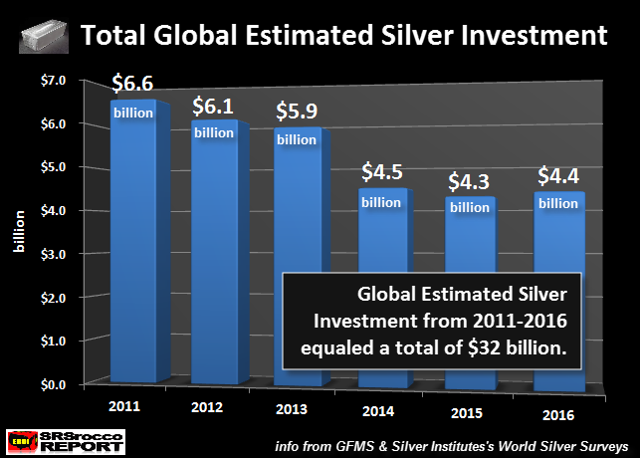 It is worth noting that physical gold investment globally totals almost ten times these figures annually. Thus, the market for physical silver is substantially smaller than the one for gold, but both are dwarfed by the size of their respective futures markets.

In 2016 alone, a total of $2.275 trillion worth of silver traded hands on the global futures markets compared to $4.4 billion worth of physical silver.

Thus, we can see that approximately 517 ounces of silver were traded on the paper markets for every ounce of physical silver that actually traded hands. It should be relatively easy to see how that could distort the silver markets and make price discovery based on actual economic principles nearly impossible.

Further evidence of the outsized effect that this trading volume has on the price discovery of silver can be seen when we look at the size of the paper market compared to mine output. As already mentioned, unlike gold, no significant stockpiles of silver exist anywhere in the world. The entire global silver supply is the amount that is produced by mines. In 2016, the amount of silver produced by silver mines globally was 886 million ounces. Meanwhile, 159,000 million ounces of silver was traded on paper exchanges in the same year. 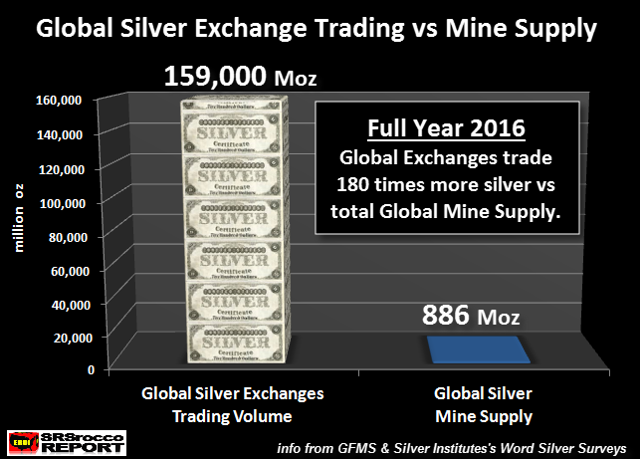 As there are no stockpiles of silver anywhere in the world and it is uneconomical to recover silver from things such as discarded electronics at the current price level, we have to conclude that the vast majority of silver being used for price discovery does not actually exist.

There also is evidence that the futures market has been or still is being used to manipulate the price of silver. Perhaps the first true confirmation of these allegations, which many precious metals investors have long suspected, came in April 2016. At this time, German banking giant (and one of the three largest silver bullion banks) Deutsche Bank AG (DB) responded to a class-action lawsuit against the three largest silver bullion banks by essentially admitting that the price of silver was indeed being manipulated since at least January 2007. Furthermore, the bank has agreed to produce evidence to the plaintiffs that should substantially assist the latter party in their case. This alone indicates that there is at least some truth to the allegations of market manipulation that some precious metals investors have leveled.

Further evidence that the silver market price may be manipulated can be found in the fact that the market frequently sees some unusual and unexplainable price action. One example of this came on July 6, 2017. On this date, someone sold $450 million worth of silver futures just as the Japanese exchanges opened (and well before the much larger American markets opened). Yes, someone quite literally sold more than 10% of the total annual physical investment market for silver in a matter of seconds into the open of a comparably small market. 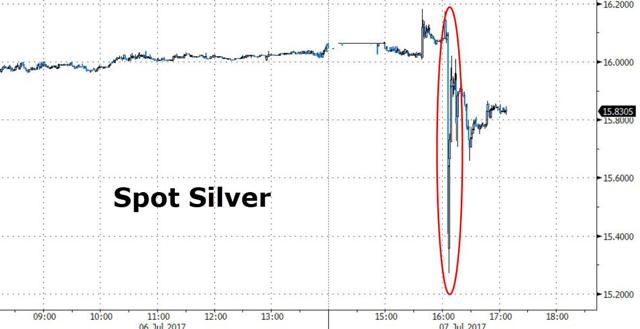 As this chart shows, this single trade caused the spot price of silver to plunge and although it experienced a quick recovery, the spot price still remained considerably lower than it did prior to this trade. There is no reason that a rational investor would place a trade such as this. This rational way to unload a large position is to do it slowly so that the seller can avoid affecting the sale price. Thus, we can conclude that whoever placed this trade deliberately wanted to affect the price.

Another example of the strange price action that frequently affects the silver market comes on September 4, 2017. On this date, silver almost reached $18/oz., which was its highest level since April 25. Almost immediately after this happened, someone dumped a huge quantity of silver into the futures market all at once:

As discussed above, there is no rational reason for an investor to do this unless they are attempting to influence the price to the downside.

The reason for this is that, unlike gold, silver is heavily used in industry and is a vital component of many elements of modern life. According to Casey Research, one of the most prominent alternative investment research firms, it requires approximately 0.2-0.3 grams of silver to construct a cellular phone and approximately 0.75-1.25 grams of silver to construct a laptop computer. Silver also is used in photography, medicine, brazing and soldering, chemical production, mirrors and glass, engines, and even hygiene. 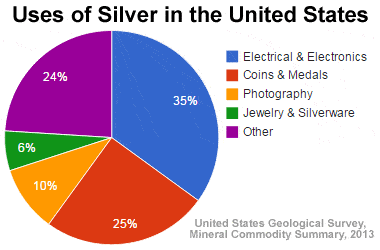 As a result of all of these applications and the growing public use of them, the world's mines have been unable to produce enough silver to meet demand for more than 10 years! 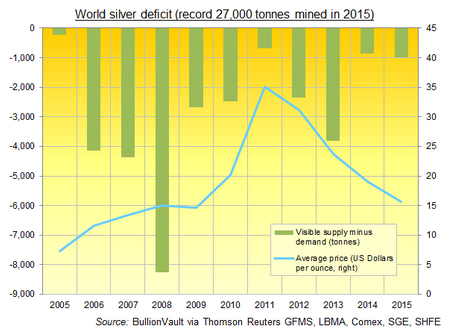 This is the reason why the previous stockpiles of silver that were held by the world's governments have since been depleted. In addition, given today's silver prices, it is uneconomical for mines to significantly increase their production. It is also uneconomical to recycle the silver contained in things such as discarded electronics. Thus, the world will continue to suffer from a silver shortage going forward.

There is one other development coming down the pike though that could result in a consumer being unable to obtain silver and this may be the thing that breaks the control that the futures market holds over the price of silver and causes the price to return to something based in economics. That development is the increasing popularity of solar power. The production of solar panels also requires silver and unlike the relatively small amounts required by the already discussed applications, solar panels require a great deal of silver. It requires approximately 20 grams of silver to construct a typical solar panel. When this is compared to the above listed figures for cellular phones and laptops, it is easy to see how the global demand for silver will increase dramatically if solar power becomes popular, as I believe it will. When we consider that the world has had a silver production deficit for over a decade, it is easy to extrapolate how this increase in demand could ultimately lead to some parties being unable to obtain the silver that they require. Such an event would almost certainly cause the price of silver to surge.

It seems obvious that the price of silver is poised to surge and when we consider that there is not a shortage of gold, at least not like there is of silver, it seems likely that silver will outperform gold going forward. This would have the effect of reducing the silver/gold ratio.

Power Hedge
12.63K Followers
Author of Energy Profits in Dividends
In-depth Research on underfollowed dividend stocks with 7%+ yields
Power Hedge is an independent stock research and analysis firm with a passion for macro- and microeconomic analysis. Power Hedge focuses our research primarily on dividend-paying, international companies of all sizes with sustainable competitive advantages. Power Hedge is neither a permabear nor a permabull. However, we believe that, given the current structural problems in the United States, the best investment opportunities may lie elsewhere in the world. The firm's strategy is primarily buy and hold, but will stray from that strategy on occasion. Our ideal holding period is forever, however we realize that both internal and external forces can impact an investment. For this reason, we believe that it is vital to keep a close eye on all of your investments. We do not believe in changing an investment based on short-term market swings.