The U.S. Census Bureau published some data on household incomes Tuesday. Off the top, the figures are encouraging: 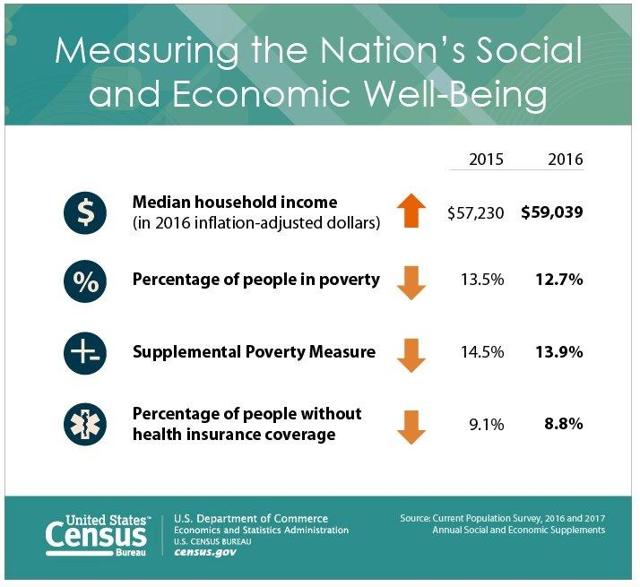 The excitement of some analysts reporting these as a major breakthrough along the trend is understandable; notionally, 2016 U.S. median household income has finally surpassed the previous peak, recorded in 1999. Back then, median household income (adjusted for official inflation) stood at USD58,665 and at the end of 2016, it registered USD59,039. Note: italics denote points of importance, relevant to the analysis below.

As this chart from MarketWatch clearly illustrates, notionally, we are in the ‘new historical peak’ territory: 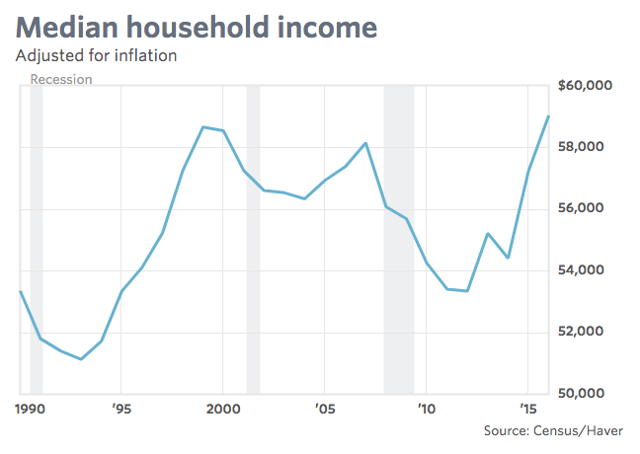 Alas, notional is not the same as tangible. And here are the reasons why the tangible matters probably more than the notional:

1) Consider the following simple timing observation: real incomes took 17 years to recover from the 2000-2012 collapse. And the Great Recession, officially, accounted for only USD 4,031 in total decline of the total peak-to-trough drop of USD 5,334. Which puts things into a different framework altogether: the stagnation of real incomes from 1999 through today is structural, not cyclical. The ‘good news’ today is really of little consolation for people who endured almost two decades of zero growth in real incomes: their life-cycle incomes, pensions, wealth are permanently damaged and cannot be repaired within their lifetimes.

2) The Census Bureau data shows that bulk of the gains in real income in 2016 has been down to one factor: higher employment. In other words, hours worked rose, but wages did not. American median householders are working harder at more jobs to earn an increase in wages. Which would be ok, were it not down to the fact that working harder means higher expenditure on income-related necessities, such as commuting costs, childcare costs, costs for caring for the dependents, etc. In other words, to earn that extra income, households today have to spend more money than they did back in the 1990s. Now, I don’t know about you, but for my household, if we have to spend more money to earn more money, I would be looking at net increases from that spending, not gross. Census Bureau does not adjust for this. There is an added caveat to this: caring for children and dependents has become excruciatingly more expensive over the years, since 1999. Inflation figures reflect that, but real income deflator takes the average/median basket of consumers in calculating inflation adjustment. However, households gaining new additional jobs are not average/median households to begin with. And most certainly not in 2016, when labour markets were tight. In other words, median household today is more impacted by higher inflation costs pertaining to necessary non-discretionary expenditures than median household in 1999. Without adjusting for this, notional Census Bureau figures misstate (to the upside) current income gains. 3) In 1999, the Census Bureau data on household incomes used different methodology than it does today. The methodology changed in 2013, at which point in time, the Census Bureau estimated that 2013 median income was about USD1,700 higher based on new methodology than under pre-2013 methodology. Since then, we had no updates on this adjustment, so the gap could have actually increased. Today’s numbers show that median household income at the end of 2016 was only USD374 higher than in 1999. In other words, it was most likely around USD1,330 or so lower not higher, under pre-2013 methodology. Taking a very simplistic (most likely inaccurate, but somewhat indicative) adjustment for 2013-pre-post differences in methodologies, current 2016 reading is roughly 1.6 percent lower than 2007 local peak, and roughly 2.3 percent lower than 1999-2000 level. 4) Costs and taxes do matter, but they do not figure in the Census Bureau statistic. Quite frankly, it is idiotic to assume that gross median income matters to anyone. What matters is after-tax income net of the cost of necessities required to earn that income. Now, consider a simple fact: in 1999, majority of jobs in the U.S. were normal working hours contracts. Today, huge numbers are zero hours and GIG-economy jobs. The former implied regular and often subsidised demand for transport, childcare, food associated with work, etc. The latter implied irregular (including peak hours) transport, childcare, food and other services demand. The former was cheaper. The latter is costlier. To earn the same dollar in traditional employment is not the same as to earn a dollar in the GIG-economy. Worse, taxes are asymmetric across two types of jobs too. GIG-economy adds to this problem yet another dimension. Many GIG-economy earners (e.g. Uber (UBER) drivers, delivery & messenger services workers, or AirBnB (AIRB) hosts) use income to purchase assets they use in generating income. These are not reflected in the Census Bureau earnings, as the official figures do not net out cost of employment. 5) Finally, related to the above, there is higher degree of volatility in job-related earnings today than in 1999. And there is longer duration of unemployment spells in today’s economy than in the 1990s. Which means that risk-adjusted dollar earned today requires more unadjusted dollars earned than in 1999. Guess what: Census Bureau statistic shows not-risk-adjusted earnings. You might think of this as an ‘academic’ argument, but we routinely accept (require) risk-adjusted returns in analyzing investment prospects. Why do we ignore tangible risk costs in labor income? Key point here is that any direct comparison between 1999 and 2016 in terms of median incomes is problematic at best. It is problematic in technical terms (methodological changes and CPI deflator changes), and it is problematic in incidence terms (composition of work earnings, risks, incidences of costs and taxes). My advice: don’t ever do it without thinking about all important caveats. Materially, U.S. households' disposable risk-adjusted incomes are lower today than they were in 1999. That explains why American households are drowning in debt: the demand for income vastly exceeds the supply of income, even as official median household size shrinks and cost of housing is being deflated by children staying in parents' homes for decades after college. The rosy times are not upon us, folks.

Constantin Gurdgiev
1.04K Followers
I lecture in Finance in Trinity College, Dublin and at Monterey Institute for International Studies (California) and hold a number of non-Executive and advisory positions. I am research-active in macroeconomics and finance, as well as economic policy analysis and my academic record can be found on the designated section of my blog http://trueeconomics.blogspot.com/. In the past, I served as the Head of Research and Partner with St Columbanus AG, Head of Macroeconomics (Institute for Business Value, IBM), Director of Research (NCB Stockbrokers), Group Editor and Director (Business and Finance Publications). All opinions expressed are my own and do not reflect the views or positions of any of my past, present or future employers. Potential conflicts of interest are highlighted in the posts wherever I can reasonably foresee such arising.