Until recently, capital markets placed much higher value on the movie experience in AMC Theatres (AMC) compared to the movie experience in Regal Cinemas or Edwards Theaters (two of the three brands owned by Regal Entertainment Group (NYSE:RGC-OLD)). At year-end 2016, one dollar of earnings for AMC was valued at an earnings multiple of 31 times. Compare that to the earnings multiple of 19 times for RGC. Yet the hefty valuation is no longer with us, as AMC’s stock price had declined to $13 from $35 this and RGC stock price declined to $15 from $21. This dramatic change in valuation peaked my interest recently and I wondered: what made AMC so valuable compared to RGC in the first place?

AMC was winning the “growth competition” until year-end 2016. The three-year score card was as follows: In 2014, AMC had lower earnings than RGC. In 2015, AMC gained higher earnings (and a higher growth rate). And in 2016, AMC won again, in both earnings and in growth rate. Since capital markets often associate a higher earnings growth trend with a market value, it is little wonder that AMC was valued 63% higher than RGC. 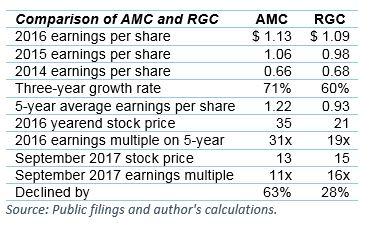 Yet a trend in earnings growth should be a small part of the value equation. Another part - an often overlooked one - is how long the common stock traded. Why this data point is important can be explained by using a real world example. If a friend of yours seeks your advice on marital issues, would you not offer a different advice based on the how long your friend has been married? Similarly, capital markets often demonstrate a different (often a schizophrenic) valuation to common shares that recently commenced trading. And back to our topic of discussion: RGC common shares have traded since May 2002, while AMC common shares have traded since December 2013.

Continuing the analogy to the world of relationships, the greater expectation we have from our spouse, the greater our disappointment if they fail to meet our standards. In the table below, I compared the operating results for the two companies over 2017 and 2016. I think you would agree with me that the disappointment is evident.

I purchased a few shares in RGC, and not in AMC, because of two arithmetic reasons and one ego-related reason. First, the average earnings multiple over the past decade ranged between 28 and 19 times. With the current market price of about $15, I purchased RGC at an earnings multiple of 17 times the 10-year average earnings per share. Second, RGC had not showed a loss over the past ten years. Third, I wanted to be in the entertainment business. Many of my friends have movie scripts hidden in their drawers; some have even auditioned. And the lure of the entertainment business has not bypassed yours truly. 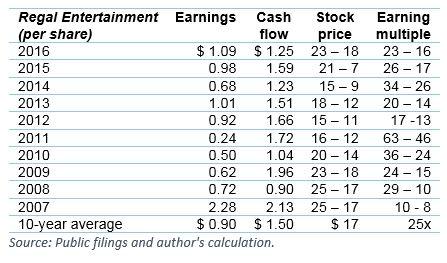 Besides, I enjoy movies. I went to see “Dunkirk” last Sunday and had asked a few guests, whose ages ranged from 21 years to 74 years of age, what drew them to the movie theaters. “Imdb gave the movie an 8.4 rating and we just couldn’t wait for two months before the DVD release,” said a couple in their 40s. “I’m here on a first date,” said a freshman that studies Business Administration at UCSD, “And she didn’t agree to watch a movie at my place, especially since my roommate is out of town.” Finally, a retired doctor told me that his daughter and stepdaughter were in town and watching movies was an activity they could do as a family. Immersed in thoughts and questions about the future of the movie business, I suddenly realized - my date had left.

After thoughts: Over the next few months, I will write on RGC’s income statement, balance sheet and more. The company carries a negative equity balance, which is an interesting story in and of itself (that is, if you are like me and get excited by accounting mysteries). If you would like to know when I post articles, just click on the orange “follow” button at the top of this page.

In the meantime, there is plenty to read about the movie industry on Seeking Alpha. Michael Boyd shares my view of RGC, but for different reasons. In “Regal Entertainment: 2 Thumbs Up,” he discussed the industry outlook and the company’s operating results. The commenter under the pseudonym “Bank on Insight” found AMC to be of value. In “AMC: A Heck of A Deal for Dividend Investors,” he discussed the irrationality of the company valuation (I, on the other hand, found the devaluation quite rational). Finally, an author, under the pseudonym, “The Value Investor,” wrote in “AMC Entertainment – A Deal Making Spree Gone Bad” on the potential and actual effect of acquisitions.

Disclosure: I am/we are long RGC. I wrote this article myself, and it expresses my own opinions. I am not receiving compensation for it. I have no business relationship with any company whose stock is mentioned in this article.