Any of my regular readers would know that I have been bullish on silver (NYSEARCA:SLV) for some time but in all honestly, the recent performance of the lustrous white metal has been particularly disappointing. While gold (GLD) has recovered strongly in recent months roughly returning to where it was in the lead up the U.S. presidential elections, silver has failed to perform. 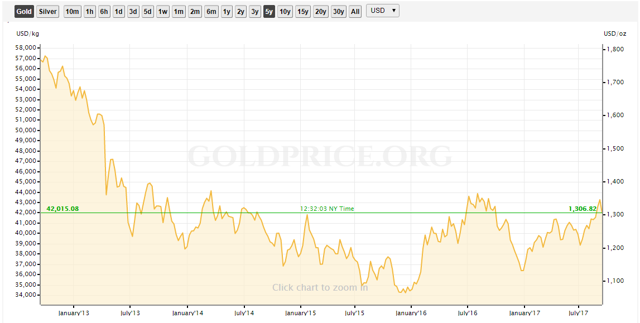 The white metal has not traded for a sustained period above the psychologically important $20 per ounce barrier since August 2014. 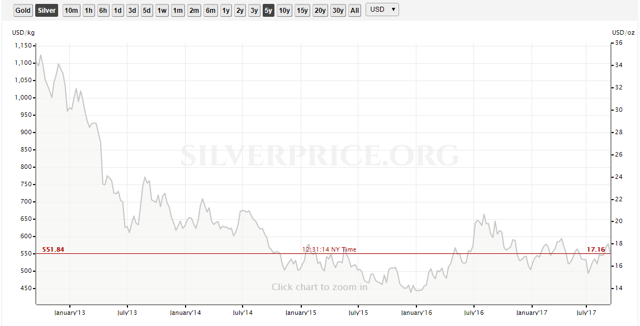 This has created considerable speculation among market pundits trying to determine why silver remains weak and has become the sick man of precious metals.

In this series of articles, I am going to take a closer look at the various claims and attempt to determine whether silver still presents as an investment opportunity.

Among some of the most popular forms of speculation have been claims of market manipulation, and that alternate digital currencies such as Bitcoin (BTC) have attracted the attention of investors that would typically be attracted to silver. While these claims may reflect some changes in the attitude of investors and the falling popularity of silver among alternate investors, the reality is somewhat different with market manipulation being among the most likely reasons for silver’s extreme volatility and prolonged slump.

Does the tremendous volume of paper silver lead to market manipulation?

One of the primary reasons for silver’s continued weakness is the tremendous volume of paper silver that exists, notably when compared to gold. Back in 2014 Bloomberg published an article speculating that the paper silver is roughly 250 times larger than the market for physical bullion.

At the time, silver was trading at around $20 per ounce so that claim was based on the assumption that with annual silver production coming in at one billion ounces, the market for bullion was valued at $20 billion. Yet Bloomberg hypothesized that the paper silver market was valued at $5 trillion which is 250 times the value of physical bullion.

If we turn to data from the Silver Institute to gain a more up to date picture, it can be seen that the total volume of paper silver trading on world exchanges in 2016 came to 159 billion ounces or was 136 times higher than physical bullion.

According to an analysis of silver registries, there are 29 registered owners per ounce of physical silver available, underscoring the considerable leverage created by silver contracts.

No matter which way you look at it, these paper contracts have created a virtual supply of silver which has flooded the market with so much liquidity that it has magnified the level of volatility for silver to a far greater than which it is traditionally subject too. This tremendous volume of paper silver is artificially suppressing the price of silver, leaving it disconnected from the realities of supply and demand.

That becomes all too apparent when considered that for the last four years there has been a significant deficit of physical silver which came to and another is forecast for 2017 yet prices have weakened over that time. Between 2013 and the end of 2016, the average annual price of silver fell by 34% and despite recovering somewhat since last year it is still down by 28% compared to 2013.

There was however between 2007 and 2016 a considerable surge in the demand for silver coins, bars and other bullion with demand over that period growing more than threefold, highlighting silver’s popularity among investors.

The claims of manipulation have gained considerable weight since silver investors in 2014 brought claims of market manipulation against Deutsche Bank, HSBC Holdings, Bank of Nova Scotia and UBS. It was claimed that these banks which were involved with setting the daily silver fix were manipulating the silver price to their advantage.

In 2016, Deutsche Bank while denying any wrongdoing settled the case agreeing to pay $38 million. This effectively saw it decide not to contest claims of employing a manipulative device, bid-rigging, unjust enrichment, price fixing and price manipulation among others.

It is worth noting the comments of the trial judge who concluded that the plaintiffs had sufficiently but “albeit barely,” alleged that Deutsche Bank, HSBC and Bank of Nova Scotia violated U.S. antitrust law by conspiring to depress the Silver Fix from 2007 to 2013.

Notably, since that settlement, there are claims that Deutsche Bank records provided to the plaintiffs as part of the settlement indicate that UBS, HSBC and Bank of Nova Scotia among other institutions rigged the market for silver. There is also empirical academic research available that is suggestive of price manipulation, further supporting claims that the manipulation is widespread and systemic.

This manipulation has forced investors and traders to be price takers because the disconnect between supply and demand fundamentals means price discovery has been virtually impossible.

It is this which has undermined confidence in the silver market and could be one of the reasons for the sharp drop in the demand for silver coins, rounds and bars, notably among retail investors. For 2016, the demand for silver bullion investors declined by 29% year over year, while sales data from the U.S. Mint Sales shows that during the first four months of 2017 there was a 54% year over year decline in silver coin sales.

Is regulation the answer?

In response to the manipulation of precious metals, forex and the Libor the European Union on January 1, 2018, will introduce new regulations aimed at making it more difficult for institutions and traders to manipulate financial markets including precious metals. This, it is hoped, will reduce the volatility associated with silver and reinstate confidence in the pricing mechanism among investors, but it could instead have the opposite effect.

Fears of being perceived to be manipulating the silver price has caused participation in the London Fix auction to wane leading to lower orders, reduced liquidity and consequently higher volatility for silver. That has led to huge unpredictable price fluctuations that have caused it to diverge widely from the spot price since January 2016. This is damaging the credibility of this benchmark price setting mechanism and highlights the issues that surround making the price for silver.

While much of the evidence supporting claims that silver is being manipulated is only anecdotal and circumstantial in nature there is something clearly amiss, as the breakdown between supply and demand fundamentals and the price of silver indicates. The divergence between gold and silver as highlighted by the gold to silver ratio widening by 3 ounces since the start of 2017 and being 13 ounces higher than the 40-year average has created an opportunity for investors.

New regulations coupled with greater oversight from regulators will also act as a deterrent for manipulation which should see spot silver prices eventually revert to being determined by the forces of supply and demand. That means the ongoing supply deficit coupled with rising industrial demand which will be further fueled by improving economic growth along with regulation aimed at minimizing manipulation will cause silver to appreciate.

If the gold to silver ratio reverts to closer to the historical mean that means at current prices silver offers around 23% upside. Nevertheless, there are other factors to consider and in my next article, I will consider the impact of digital currencies on demand for silver.