Calumet Specialty Products Partners, LP (NASDAQ:CLMT) is a MLP turnaround opportunity which has a real chance of reinstating its distribution and doubling in price in the next twelve months. I have been investing in MLPs since 2000 and have a solid record beating the Alerian Total Return Index AMZX and the Alerian MLP ETF (AMLP) by nearly 10% annually, since its inception. My optimism stems from my experience in investing in broken MLPs which are restructuring themselves in the wake of major MLP cycle down turns like 2008-9 and 2015-16.

In 2016, Income Growth Advisors, LLC had invested heavily in two turnarounds, American Midstream Partners, LP (AMID) and JP Energy LP (JPEP) which rose 125% and 104%, respectively before merging earlier this year. Consequently, our 2016 MLP separate account performance was up 49.9% and outperformed AMZX--which was up 18.3%--by 31.6% was noted in Barron's in Amey Stone's blog in early April Smaller MLPs May Outperform in 2017. I believe there is a similar turnaround opportunity in CLMT.

The Calumet story is a largely a family owned and operated business that flourished in the specialty oil products niche and went astray. CLMT started buying traditional fuel refineries like the Superior Refinery in 2011 shifting away from their specialty oil products niche and into the more competitive fuel refining business and then experienced balance sheet and operating troubles.

As their financials turned south and began its decline, CLMT sought new management. On September 14, 2015, CLMT brought in a new CEO Timothy Go, a seasoned energy executive with 20 years experience in various senior level operations and management roles at ExxonMobil Corporation (XOM). As a trained chemical engineer, Mr. Go has brought a deep base of technical and operational knowledge to Calumet as well as other talented executives including Wes Griffin as CFO.

When the oil market crashed from $107/bl in June 2014 to $26/bl in January 2016, CLMT was pushed over the edge. When markets crash, asset prices decline and liabilities remain constant. This put CLMT in a terrible position.

On April 15, 2016 CEO Tim Go outlined the restructuring plan for CLMT. It issued $400mm in debt and cut its distribution. The Board of Directors also stated its desire to reinstate a quarterly cash distribution in due course. We believe when the debt to EBITDA ratio returns to the 4.5 range, a distribution reinstatement will become probable. 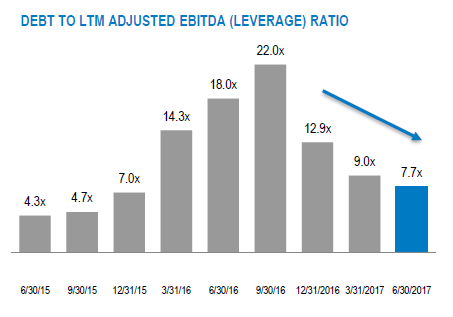 The market has started to react to these improving financial metrics. Below are five year and one year charts for CLMT. 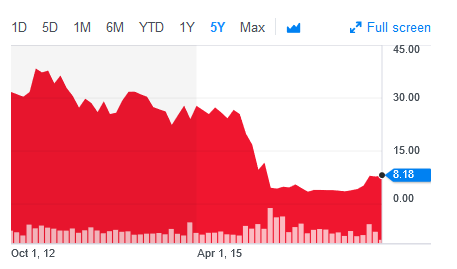 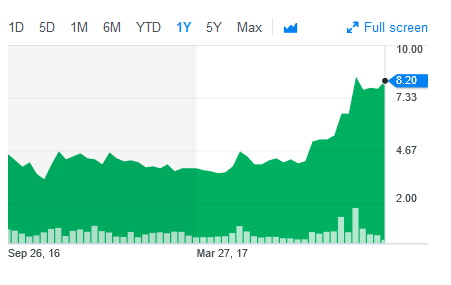 On August 14th, 2017, Calumet announced its planned sale of its Superior Wisconsin refinery to Husky Oil for about $500 million. This sale will help reduce debt on its balance sheet and continue to improve its debt to EBITDA ratio from its current 7.7 level.

The chart below shows the TTM EBITDA recovering. 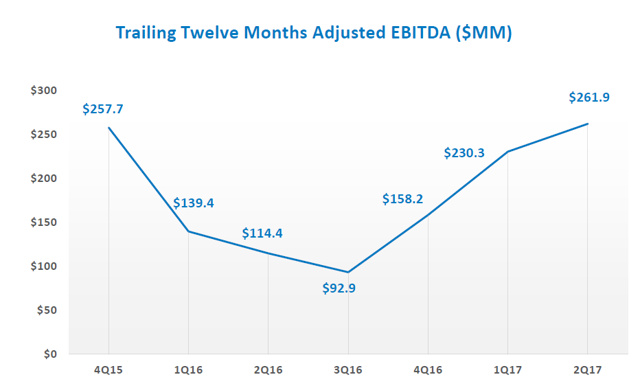 What I want to see for a distribution reinstatement is the debt to EBITDA number to return to the 4.5 range next year. 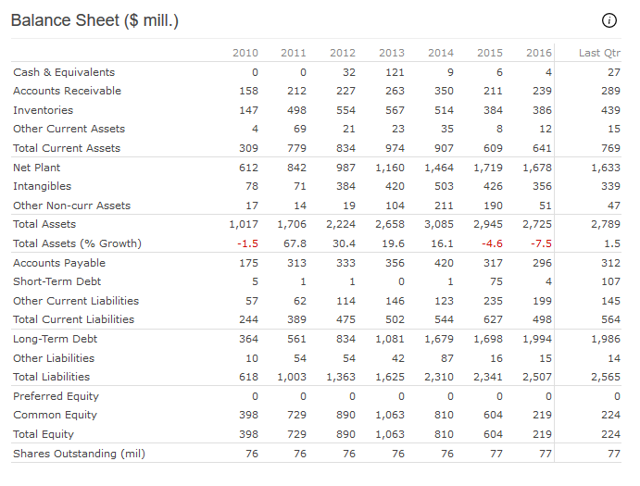 Looking forward to the closing of the Superior Refinery sale and assuming $500mm in net proceeds, total liabilities should drop to $2,056mm.

Assuming a 4.5 ratio and $2,056mm in debt, EBITDA on a TTM basis must equal $456mm. In the second quarter EBITDA was $101.6mm, though it benefited from some extraordinary items. Assuming $90mm annualized would be 360mm in EBITDA and $100mm in incremental "self-help" EBITDA, CLMT could reinstate its distribution in the one-year time-frame. Whether and when it reinstates its distribution will depend on continued operating success under the new management. Calumet's specialty product niche should provide a defensible growth business to allow CLMT to grow for years.

Additional disclosure: I bought CLMT for client accounts on 9/25/2017 in the 8.2-8.4 range and will continue to add to the position.