If we misrepresent facts or lie, as a company official, [I] can go to jail

We fear that unsuspecting investors have relied on misrepresentations by MiMedx (NASDAQ:MDXG).

Last week, we released a report exposing undisclosed entanglements with distributors who, according to whistleblower allegations, are being used by MiMedx to manipulate its financials.

Instead of responding to each of the specific allegations during the call, Mr. Petit repeatedly touted his exoneration by an internal investigation that was purportedly led by independent parties.

But we uncovered undisclosed details that, in our opinion, directly undermine the credibility of both the internal investigation and MiMedx's public statements to investors.

Note: MiMedx did not respond to a request for comment on items discussed in this report

The investigation, and the purported involvement of independent parties, was summarized in last week's press release announcing receipt of an SEC subpoena:

believe me, this board is a group of individuals that are very independent of this management group

The Chairman of the Audit Committee, by definition, should be independent of management because shareholders rely on him as a key "gatekeeper" to prevent and deter accounting fraud. MiMedx's Audit Chairman is a man named J. Terry Dewberry.

In a 2014 fraternity profile, Mr. Petit explains that the two have been "very close" for decades and that Dewberry has "been a member of the executive team for all of our businesses over the years." 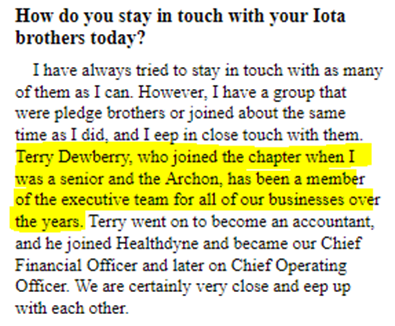 The frat even named Mr. Dewberry as helping coordinate a 2014 award for Mr. Petit. 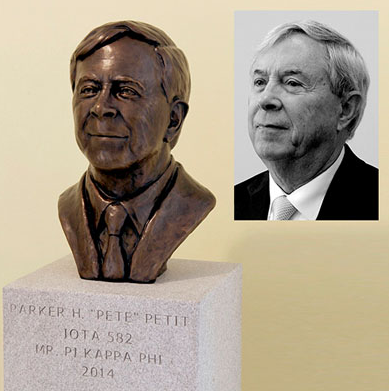 The two fraternity brothers have a remarkable history of working at the same companies together. After both worked at Lockheed, the frat's profile of Mr. Dewberry explains that he joined Healthdyne in 1981, a company founded by Petit that would later become Matria through a merger. Dewberry worked at Healthdyne for 15 years before joining the board of Matria and then following Petit to MiMedx.

We find all this particularly problematic because, as explained in MiMedx's own filings, Directors are only considered independent if they:

are free of any relationship that would interfere with the exercise of their independent judgement.

Yet Mr. Petit is actively touting the independence of an investigation that, in reality, was led by someone he has a close relationship with.

MiMedx repeated in last Thursday's press release that the audit committee worked closely with purported "independent outside legal counsel" to complete its investigation. But in conversations with other investors, MiMedx has revealed that this firm is Troutman Sanders.

Troutman Sanders has lengthy ties to Pete Petit and Terry Dewberry, having represented and defended Healthdyne and later Matria. In fact, the firm's founder, Carl E. Sanders, was also a Director of both Healthdyne and Matria.

Another "independent" member of the audit committee, Joseph G Bleser, was the CFO of Healthdyne Information Enterprises when Petit, Bleser, and Sanders were Directors. Bleser was also a Director at Matria where, of course, MiMedx Director and President/COO Bill Taylor also came from. 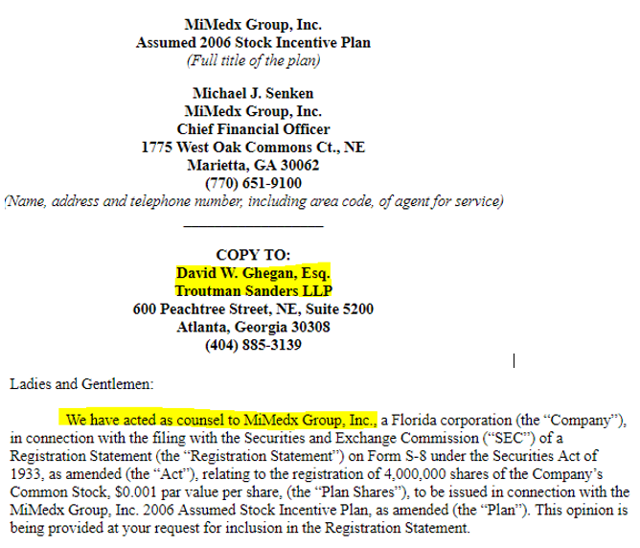 A Troutman attorney named David W. Ghegan, who previously represented Matria, is specifically named in several other MiMedx filings. In addition to documents related to the recent divestiture of Stability Biologics, Mr. Ghegan was copied on MiMedx correspondence earlier this year related to a series of SEC comment letters.

So how could MiMedx call its own securities lawyers independent?

This fact pattern reminds us of Banc of California which, in an attempt to discredit our report, falsely declared that the bank's internal investigation was led by independent counsel.

Where Is The Board's Investigative Report?

During last Thursday's call, Petit also declared that "we have also been very open and transparent with our shareholders." Petit claimed that:

the board's report is public. We made that public many, many months ago.

The SEC asked for the Executive Summary of the Audit Committee's findings in one of its comment letters from April 2017. However, MiMedx requested confidential treatment which has shielded investors from seeing it.

As far as we can tell, details of the investigation were briefly summarized in two press releases.

On December 27th, a mere twelve days after the whistleblower suit was filed, MiMedx announced "preliminary investigation findings" that no changes to previously issued financial statements would be necessary.

Then, a March 1st press release briefly summarized the board's final conclusion that "there is no credible evidence of any wrongdoing on behalf of MiMedx management."

But what is the name of this expert and where is his/her analysis? Did these parties also review MiMedx's relationships with CPM Medical, SLR Medical, Spinelogix, and other distributors?

These questions and others are precisely why Mr. Petit must honor his word and immediately release the board's report (including the expert's analysis) in its entirety.

In our opinion, the undisclosed details discussed in this report undermine the credibility of MiMedx's internal investigation and the company's public statements to investors.

This is especially troubling because MiMedx has disclosed the receipt of a subpoena from the SEC after the emergence of serious allegations of channel stuffing. Furthermore, the company has disclosed that terminated individuals have "provided gifts and meals to employees of the VA" and that one former employee has now pled "the fifth amendment rather than answer questions related to dinners provided to doctors."

In light of these significant risks, we believe MiMedx is simply uninvestible.

Disclosure: I am/we are short MDXG. I wrote this article myself, and it expresses my own opinions. I am not receiving compensation for it. I have no business relationship with any company whose stock is mentioned in this article.

Additional disclosure: IMPORTANT. The information set forth in this report does not constitute a recommendation to buy or sell any security. This report represents the opinion of the author as of the date of this report. This report contains certain “forward-looking statements,” which may be identified by the use of such words as “believe,” “expect,” “anticipate,” “should,” “planned,” “estimated,” “potential,” “outlook,” “forecast,” “plan” and other similar terms. All are subject to various factors, any or all of which could cause actual events to differ materially from projected events. This report is based upon information reasonably available to the author and obtained from sources the author believes to be reliable; however, such information and sources cannot be guaranteed as to their accuracy or completeness. The author makes no representation as to the accuracy or completeness of the information set forth in this report and undertakes no duty to update its contents. The author encourages all readers to do their own due diligence.
You should assume that as of the publication date of his reports and research, Aurelius and possibly any companies affiliated with him and their members, partners, employees, consultants, clients and/or investors (the “Aurelius Affiliates”) have a short position in the stock (and/or options, swaps, and other derivatives related to the stock) and bonds of MiMedx. They therefore stand to realize significant gains in the event that the prices of either equity or debt securities of Mimedx decline. Aurelius and the Aurelius Affiliates intend to continue transactions in the securities of Mimedx for an indefinite period after his first report on a subject company at any time hereafter regardless of initial position and the views stated in Aurelius’ research. Aurelius will not update any report or information on this website to reflect such positions or changes in such positions.
Please note that Aurelius, the author of this report, and the “Aurelius Affiliates” are not in any way associated with Aurelius Capital Management, LP, a private investment firm based in New York, and any affiliates of or funds managed by the latter company.