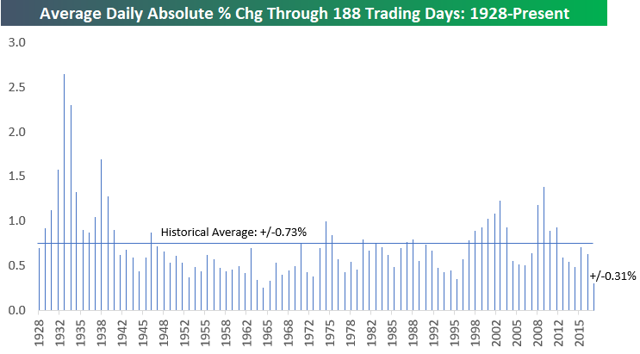 Three of the ten most volatile years have come since the year 2000, so only the youngest investors haven't experienced a period of massive volatility. 2009 ranks 5th with an average daily move of +/-1.39% through 188 trading days. Memory is fleeting, though, and at this point, it's difficult for most investors to remember exactly how they felt during the darkest days of the Financial Crisis. The further we distance ourselves from the Crisis and the lower volatility gets, the more complacent investors will become. 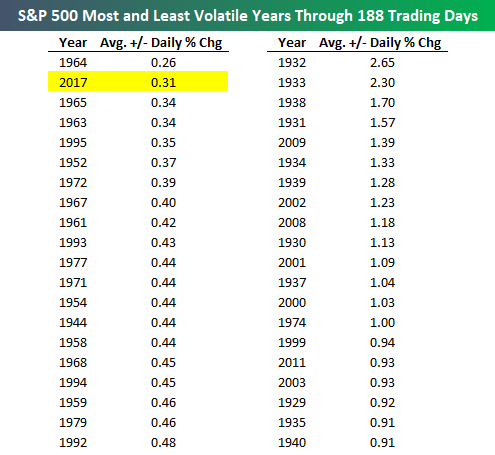 Bespoke Investment Group
46.2K Followers
Bespoke Investment Group provides some of the most original content and intuitive thinking on the Street. Founded by Paul Hickey and Justin Walters, formerly of Birinyi Associates and creators of the acclaimed TickerSense blog, Bespoke offers multiple products that allow anyone, from institutions to the most modest investor, to gain the data and knowledge necessary to make intelligent and profitable investment decisions. Along with running their Think B.I.G. finance blog, Bespoke provides timely investment ideas through its Bespoke Premium (http://bespokepremium.com/) subscription service and also manages money (http://bespokepremium.com/mm) for high net worth individuals. Visit: Bespoke Investment Group (http://bespokeinvest.com/)