Construction spending rose slightly in August after two months of serious declines. At a seasonally-adjusted annual rate of $1.22 trillion, that's slightly less than the estimate for November 2016 when "reflation" (sentiment) was at its apex. It's a pattern that we see repeated throughout the economic accounts; some growth in the second half of last year but then instead of acceleration as "reflation" might imply more weakness that is quite often severe to the point of (slight) contraction. 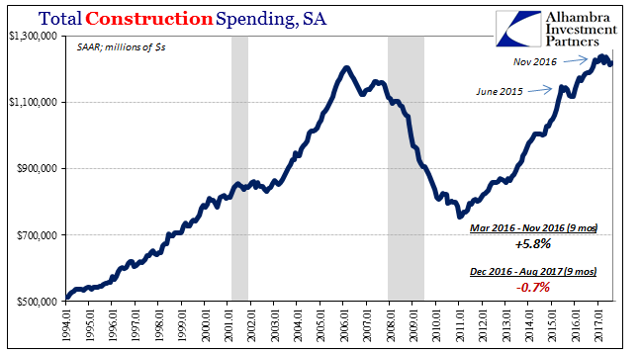 The same themes that have plagued the sector throughout 2017 remained evident in August. The first is non-residential construction, or capex. This part actually contracted year over year (NSA) for the second straight month. As with overall construction spending, activity here was up rather sharply, 9%, in the nine months through November 2016, but is down a little more than 3% in the nine months since. 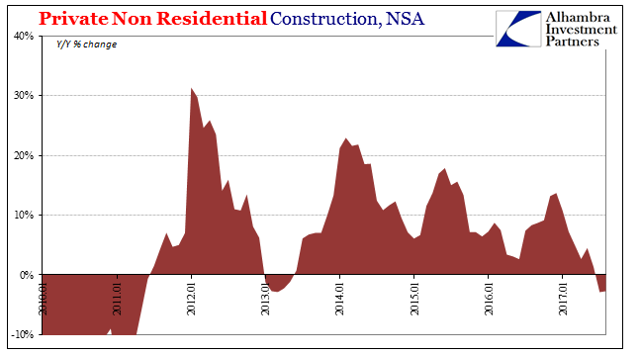 Clear reluctance on the part of the business sector to invest productively is a function of profits and cash flow. There has been little growth in those going all the way back to 2012 (in the corporate sector), followed by contraction throughout 2015 and 2016. Profits have only recently begun to rebound and so far, it isn't nearly as robust of an upturn as may have been expected. 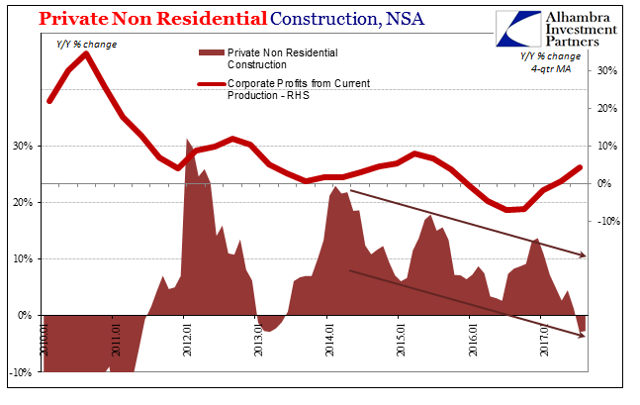 If businesses are hesitant to increase their capital budgets, state and local governments are even more cautious. Total public construction spending has been trending lower for more than two years, going all the way back to June 2015 and the abrupt economic effects of the "rising dollar." 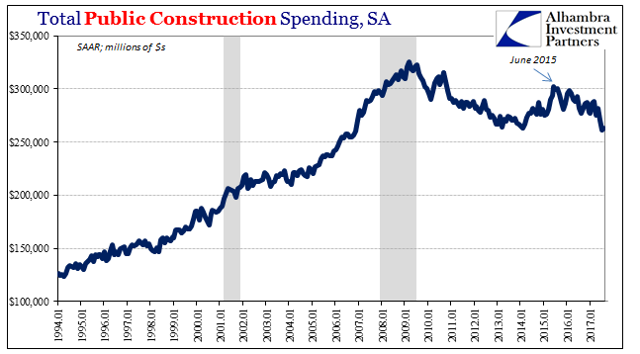 Spending plans have been cut even further in the past few months, including August 2017. Like corporate businesses, state and local budgets are being set by less of a rebound (in tax collections) than was likely anticipated (both corporate business and local governments get their economic projections from the same place; Economists). Total tax receipts in Q2 2017, the most important quarter of the year, were up just 2.3% from Q2 2016. That was less than the 3% Y/Y growth in Q1, and quite a bit less than the 7.7% Y/Y growth in Q2 2015. 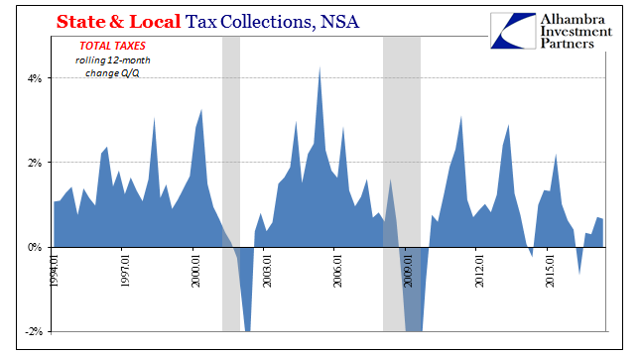 This despite a rebound in corporate tax collections that are up with reported profits. The corporate tax segment, however, is the smallest proportion of the state and local tax base. About 40% of total levies are derived from income taxes. The Census Bureau estimates that individual income tax collections in Q2 were down 1.1% year over year in this heaviest quarter. 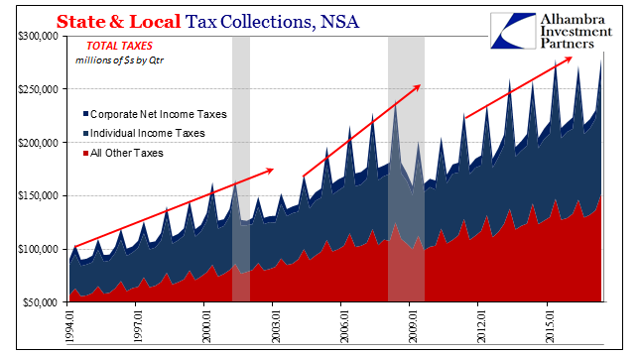 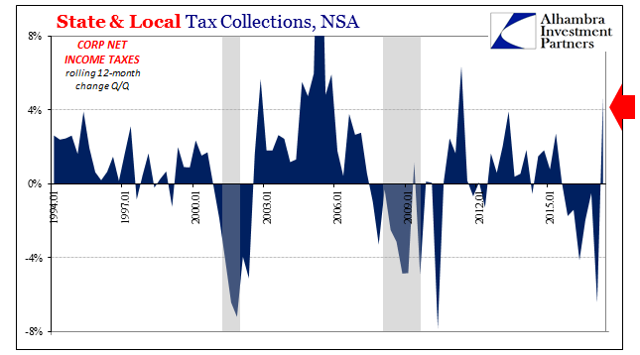 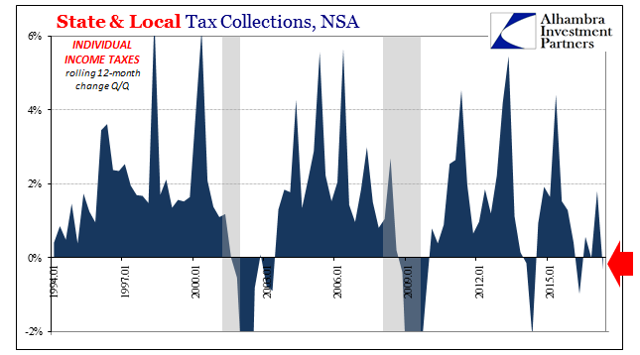 There are, of course, implications beyond government construction spending from that result. It corroborates the income data, which shows a shift in the labor market (not a good one) due to the near-recession in 2015-16 that lingers on well into 2017. 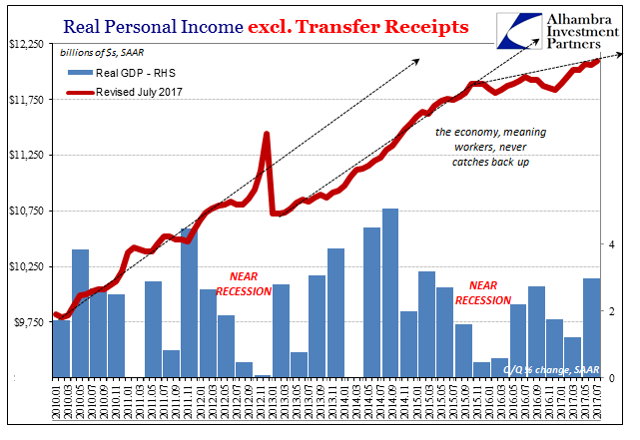 So far, the only segment of the industry that has held up is residential construction. Given that growth in dollar terms doesn't match growth in unit terms, the difference is price. In other words, home builders are in all likelihood building fewer homes than they might otherwise, as those being built seem to be more and more at the higher end. 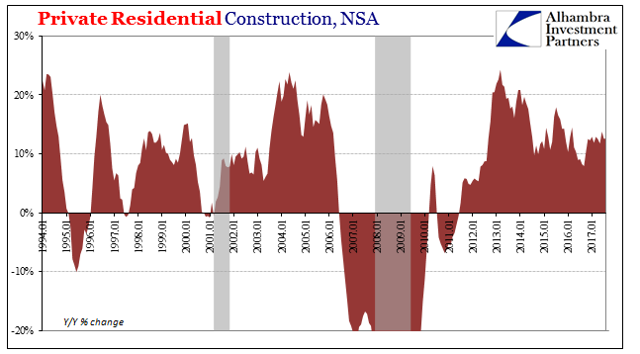 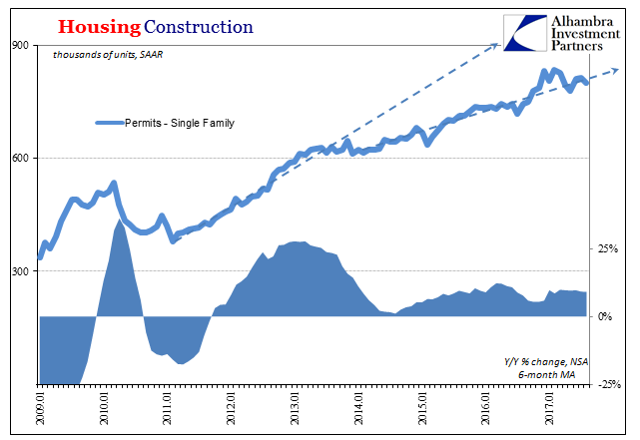 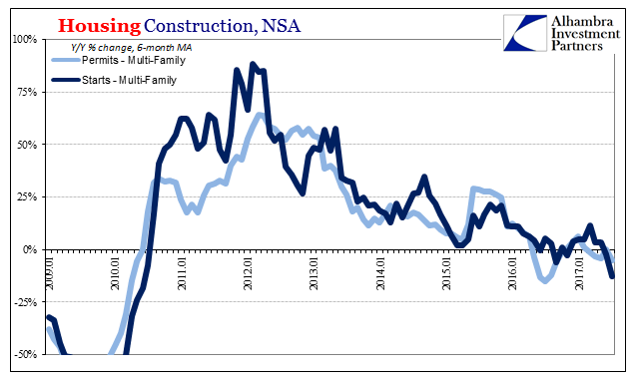 The tax collections data explains a good deal about the residential construction market, too. If individual taxes are down, and thus the labor market weak, only those who are doing very well are going to be buying new houses (or selling their existing ones). And labor market weakness is not limited to those who can't get jobs. Workers at their current employment are not in an uncertain payroll environment going to be aggressive in their overall consumer behavior; this is not 2005. 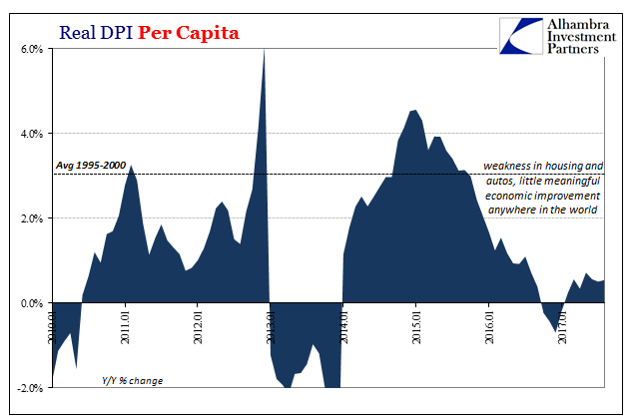 That, too, is very likely the result of disappointment. The personal savings rate, for example, declined sharply in the second half of 2016 along with the rise in "reflation" sentiment. It suggested that while incomes were not yet rebounding, consumers in the aggregate (listening too much to Janet Yellen again) appeared to have expected that they would. Weakness across the economy in 2017 is as much dealing with the (inevitable) disappointment that they haven't. 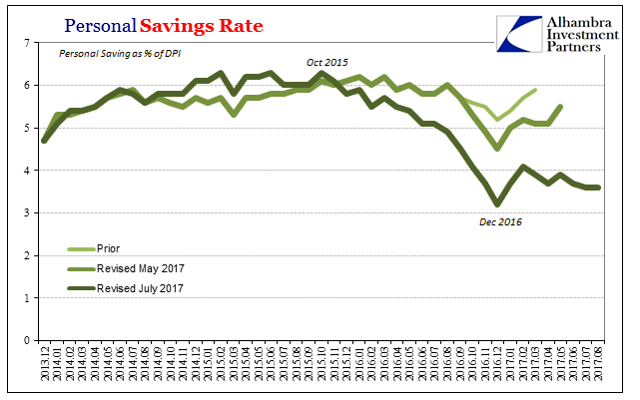 In that way, construction spending is a very good example of economic conditions overall. Economic agents were last year counting on if not big things than at least better things. The more we go in 2017, the less of even that there is to find.