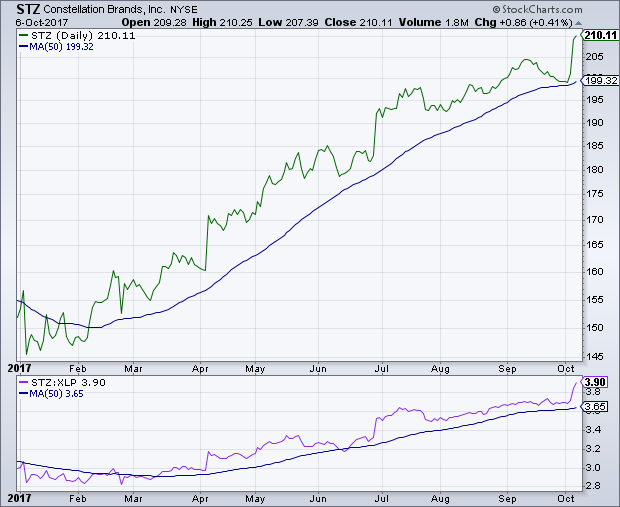 Just over 29% of consolidated sales for the quarter was attributable to the company's wine segment, which includes table, sparkling and dessert wines retailing from $5 to $25/bottle. Spirits comprise just under 5% of consolidated sales. Net sales of the company's wine and spirit segment fell just short of 12% through the end of August with a post of $705.6 million in sales juxtaposed against $798.7 million YOY. Shipment volume fell just over 19% for the period to 14.7 million 9-liter case units, down from 18.2 million YOY. The decline was due mostly to a divestiture of Canadian assets of just over $100 million. At the same time, shipment volume lagged inventory depletion growth during the quarter.

For the quarter, operating income increased by just over 10% for the first six months of the year while net income for the quarter was up 33% YOY. Earnings per share of class A stock came in at $4.67/share, up 37% for the period. The stock has fared well for the past five months, positioning itself above its 50-day trading average by the second week in February and sustaining the path throughout the period. Factoring out SPDR Consumer Staples (XLP) portfolio mix, STZ has outperformed for much of the period (see Figure 1, above).

Figure 2: US Dollar and the Mexican Peso 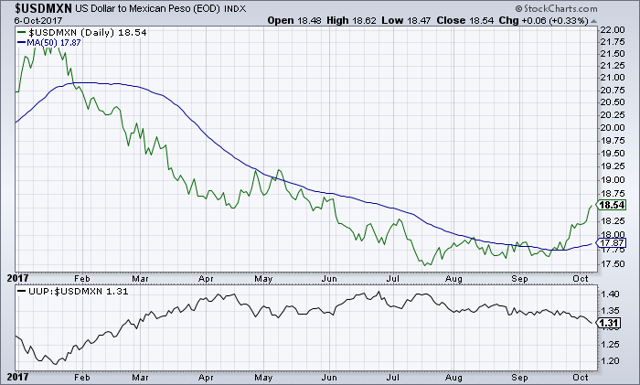 Are these gains in the beer segment sustainable? There are three factors to consider in answering this question: 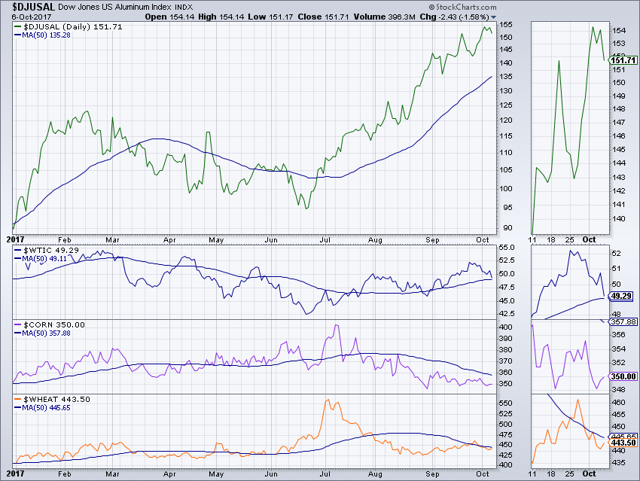 Commodity price exposure includes aluminum, heating oil, natural gas, corn and wheat-and all of these items are priced in US dollars. With a weak US dollar for much of the year, the notional value of these contacts fell for the period to $157.2 million, down almost 16% from $186.3 million YOY. For the month of September, the US Dollar Index (DXY) increased just over 2% as markets continue to price in the Federal Reserve's program to reduce its $4.5 trillion balance sheet that went live in October. The program will remove $6 billion of Treasury notes and $4 billion of mortgage backed securities (MBS) that would have otherwise been reinvested in their respective markets, effectively tightening the level of liquidity in those respective markets moving forward. At the September meeting of the FOMC, the committee signaled strongly that a third uptick of the federal funds rate remains on the table, with the market probability of such a move now residing north of 90% through Friday's closing bell. Aluminum prices have soared since mid-June and now trade well above its 50-day trading threshold. Corn and wheat prices have been trading beneath their respective 50-day trading measures since August but have largely closed in on these thresholds since the beginning of the 4th quarter. Higher energy prices, driven by a strengthening dollar, continues to face down demand that stubbornly remains below current world supply and will likely continue to do so for the foreseeable future (see Figure 3, above).

The company's 2nd quarter gains will be difficult to sustain given the likely increase in the relative strength of the US dollar in world currency markets moving forward. The dollar is at its strongest point since the first week in June and is trending to the upside. The peso is now trending to the downside. Borrowing costs are on the rise as central banks across the developed world landscape push interest rates higher. The relative sweet spot created by low inflation, rock-bottom borrowing costs and sustained by copious flows of accommodation from central banks is slowly on the reverse. The environment where central banks become net sellers of assets after a $14 trillion buying spree worldwide over the past decade has yet to be charted. The forex dynamic alone coupled with a dollar driven uptick in commodity prices appears destined to challenge the company's 2nd quarter gains as the dollar flexes its muscles in the coming months. Expect a 5 to 7 percentage point decrease in the company's current market price of $210.11 by the end of its fiscal year in February.

Disclosure: I am/we are short STZ. I wrote this article myself, and it expresses my own opinions. I am not receiving compensation for it (other than from Seeking Alpha). I have no business relationship with any company whose stock is mentioned in this article.