The stock market has had unusually quiet action in 2017 as the largest correction of the year was 2.8% which is the second shallowest maximum drawdown since 1928. That’s not necessarily a bad thing, but it shouldn’t lull you to sleep. Valuations are high as measured by the Shiller PE which is at 31.11; clearly there is some risk to the idea that great returns will continue in perpetuity. In this article, we’ll look at some of the bearish signals in this market to measure the risk and determine if you should take profits. 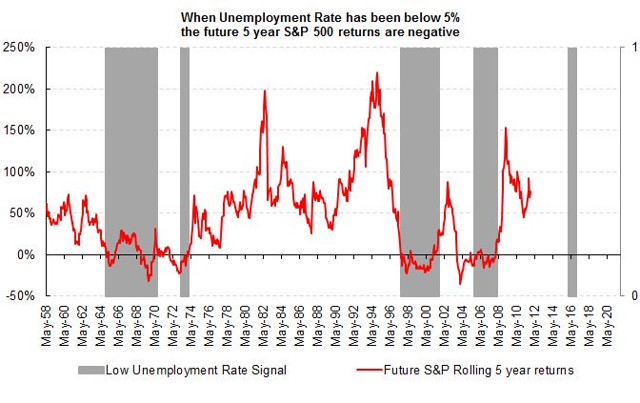 The reason this negative correlation between stock returns and the unemployment rate likely exists is because a low unemployment rate means the business cycle is ending. When the economy gets to full employment there is little slack in the labor market which causes wage inflation. Wage inflation hurts profit margins. The Fed fights this inflation by raising rates. This leads to lending requirements tightening which increases borrowing costs and plunges the economy into a recession. The counter point to the negativity shown in the relationship between the unemployment rate and stock returns is shown below.

The Atlanta Fed wage growth tracker shows the 3 month moving average for wage growth is 3.4% which is below previous cycle peaks. The Fed has stated inflation hasn’t come in as high as it has expected it to. That might be because the unemployment rate isn’t properly measuring the slack in the labor market. If there’s more slack, that would delay wage inflation, making the chart above ineffective at predicting future stock returns. 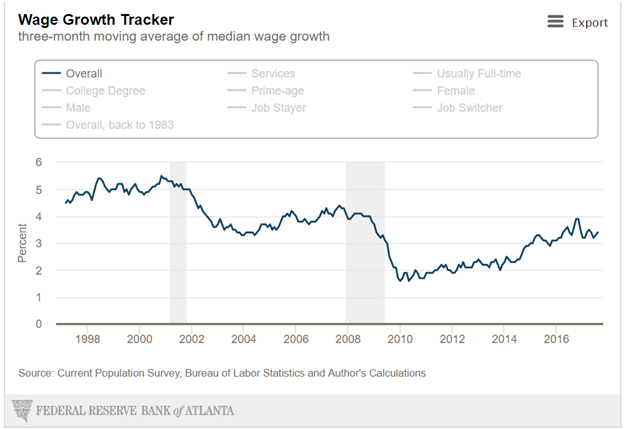 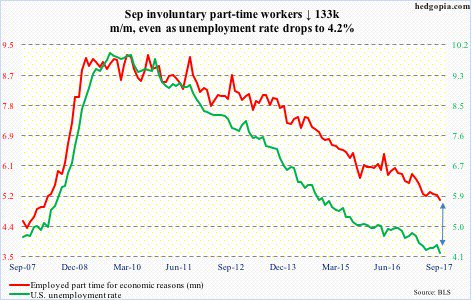 While disappointing wage growth means the Fed won’t get aggressive with its rate hikes, it isn’t great news for the consumer. The chart below shows the 5 year compound annual growth rate of personal current transfer receipts per capita. It’s a measure of real disposable income. 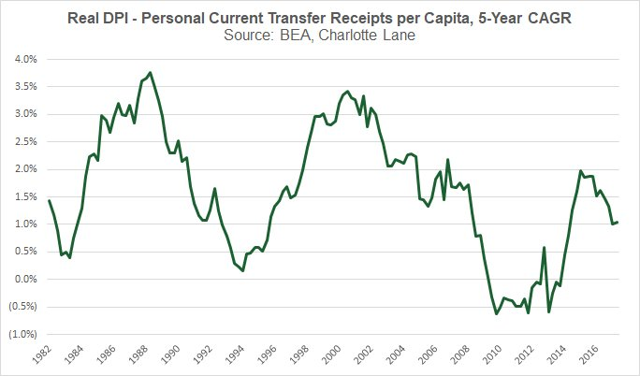 As you can see, the disposable income growth appears to be rolling over along with wage growth. Since two thirds of GDP growth is driven by consumer spending, the prospect that consumption growth is slowing isn’t promising. The current stock market is living off the prospect that the economy is in a Goldilocks scenario. Growth isn’t heating up to the point where a hawkish Fed is necessary, but it’s not bad enough to increase the risk of a recession. The key when trying to time your profit taking is determining when this Goldilocks scenario will end. As you saw from the first chart, when everything looks great, it’s generally the time to be a contrarian. The key is to figure out when the economy looks perfect because at this time the risks of it only going lower increase significantly. The real disposable income chart and wage growth chart seem to indicate that the economy didn’t get to previous levels seen before recessions.

One indicator which seems to imply the economy is overheating is the ISM report. The ISM manufacturing report, seen in the chart below, had its highest reading since May 2004. 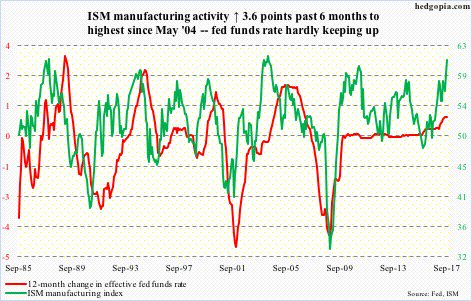 The 60.8% reading is the type of report which would imply further rate hikes are coming. As you can see, whenever the ISM manufacturing index has increased, the Fed has met that optimism with rate hikes. The two obvious times where the Fed didn’t raise rates were in this cycle, implying the Fed may have kept interest rates too low for too long. The last time that occurred, the housing bubble was created. This time rates were kept further below the Taylor Rule for longer and quantitative easing was implemented.

To bring this discussion full circle, as we mentioned in the beginning of this article, stocks are expensive. Avoiding the decline at the end of this bull market the market could be more important than usual because of how expensive stocks are. As you can see from the chart below, the non-financial ex-energy and tech enterprise value to trailing twelve month sales is near the highest point since the late 1990s which was the build up to the dot com bubble. 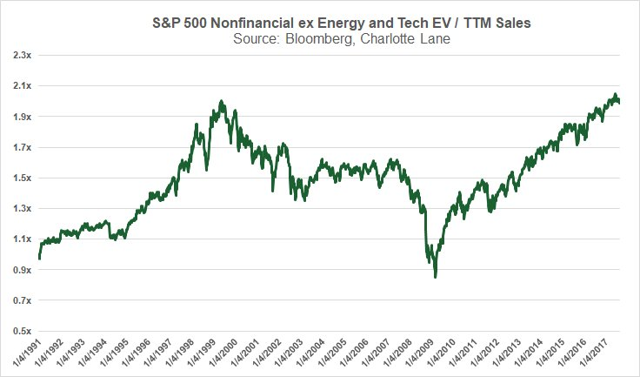 One aspect to keep in mind is technology is the cheapest sector relative to its historical valuation. That means without the large technology firms which have ballooning profits, stocks would be a historically bad investment. The non-financial ex-energy and tech group has about 17% EBITDA margins which is near the highest in the past 20 years. While technology might be able to have secular improving margins, all other sectors are cyclical. This means there’s a good chance margins won’t get much better from here. Declining margins would send stocks crashing.

The stock market is expensive according to most measures. This makes timing the cycle important. It’s a tough process. The ISM manufacturing report and unemployment rate seem to indicate that the economy is overheating. On the other hand, the wage growth and the number of people working part time for economic reasons seem to indicate that there’s more room for the economy to grow before bumping up against high inflation which would cause the Fed to raise rates faster than they are now. In the opposite direction, you can make the case that the Fed is already pushing the economy lower with its 4 rate hikes as the wage growth has decelerated this year instead of picking up like the Fed expected.

There’s always going to be divergent economic data points. It wouldn’t be fair for us to claim otherwise. That’s why we like to include counterpoints. One metric which can’t be countered is that stocks have high multiples. This means it makes sense to take some profits. The data we’re looking at when trying to time the cycle indicate that it’s either 75% done, 90% done, or the economy is already slipping. Given those options, raising cash may be the smart decision to make. If you need to buy a sector, technology may be the best because it’s the cheapest.

Disclaimer: This content is for general informational and entertainment purposes only and should not be construed as financial advice. You agree that any decision you make will be based upon an independent investigation by a certified professional. Please read full disclaimer first on timemoney.com/disclaimer/

UPFINA
22 Followers
UPFINA.com provides you with objective analysis of current events, the economy and how it all affects your life, money and personal finances.