In my Seeking Alpha article China's New Gold-Backed Oil Futures Contract Cuts Out The U.S. Dollar I explained how this new and recent development could cause massive disruption in to today's global oil market. But China isn't stopping there. The USA Today reports China is now using its status as the world's biggest oil importer to strong-arm Saudi Arabia to accept the Yuan in oil transactions. I think this is one of the most important and least publicized developments in the global currency markets.

I believe that yuan pricing of oil is coming and as soon as the Saudis move to accept it — as the Chinese will compel them to do — then the rest of the oil market will move along with them.

This obviously has huge implications for the U.S. petrodollar. China's crude imports averaged around 7.6 million barrels a day in 2016. At $50/bbl, that equates to trading of an estimated $138 billion on an annual basis. For comparison, note the total market cap of the SPDR Gold Trust ETF (NYSEARCA:GLD) is around $35 billion. I mention that just as a comparison metric for investors to judge the potential impact if only 25% of China's oil imports were to trade based on this new futures contract. 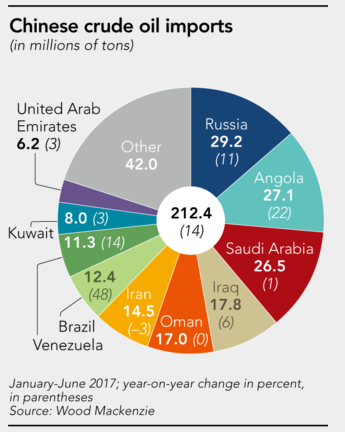 And, as shown above, it is clear that China is intelligently diversifying its sources of imported, with Saudia Arabia making up only 12.5% of total imports during the first 6-months of this year. Meantime, Saudi Arabia's exports to the U.S. have dropped from over 2 million bpd in 2003 to a current ~1 million bpd this year:

Meantime, Russia is now the largest source of oil for China after some big energy and pipeline deals that I reported on back in 2013. These deals did not use the U.S. dollar.

Note that Russia, Brazil, and Venezuela alone accounted for around 25% of China's total oil imports (see graphic above). If Saudi Arabia capitulates to using the Yuan for oil trades, Middle Eastern exporters like Iraq and Iran would likely follow. That means that - very quickly - more than 50% of China's imports could potentially be non-U.S. dollar denominated transactions. If so, the impact would be huge. Over time it could erode the U.S. "petro-dollar's" role as the world's reserve currency of choice - and this would have a dramatic affect on the U.S.:

And of course oil - being the largest globally traded commodity - would likely have a big impact on the U.S. dollar being the world's reserve currency. Countries like China, Russia, India, Turkey, Brazil, and Venezuela have proposed using IMF "special drawing rights," or SDRs - which would be calculated daily from a basket of various currencies: the U.S. dollar, euro, Japanese yen, British pounds, and Chinese yuan - for international payments. Some have also advocated that precious metals like gold and silver also be components of any globally agreed upon SDR "basket." While the U.S. has been fighting such a move due to the obvious advantages of being the world's reserve currency (i.e. being able to raise the debt limit whenever it desires), ironically it may find itself need to support the idea of an "SDR basket" of currencies just to prop-up the US$ against the Yuan.

All this is obviously very bullish for gold. And when we factor in one of the most politically uncertain eras in U.S. history (see my 3-part series on Gold: The Possibility Of A Trump Induced Rally), I am amazed gold is currently trading under $1,300/ounce. Consider that we actually have a well respected U.S. Republican Senator saying out loud that Trump could be leading the U.S. onto a path to WWIII. An editorial in today's NY Times promotes the idea of barring the president from launching a first nuclear strike without a declaration of war by Congress.

Meantime, the administration's "tax reform" policy of giving additional tax breaks to the wealthy and corporations is believed to have dire consequences for the already blooming Federal debt. The Washington Post reports that the Republican party's tax policies are likely to add likely to add trillions to the deficit and relies on overly rosy projections of economic growth to minimize its budget impact. We've seen this game before. It is just the opposite of what the U.S. should be doing if one believes the days of the U.S. petrodollar dominating world trade could be numbered.

With U.S. crude oil exports recently hitting 2 million bpd, and growing, it is clear that if Saudi Arabia wants to keep its market share in China it will likely have to do so on China's terms: and that means accepting the Chinese Yuan instead of the US$.

The outlook for gold is the most bullish of my lifetime. All U.S. investors should allocate a portion of their portfolio to gold as an insurance policy against the very real possibility that the US$ could be dethroned as the world's reserve currency of choice. Whether it be the highly liquid GLD ETF or phyical gold bullion, U.S. investors should be taking steps now for the very real possibility that the days of the U.S. petrodollar are numbered. Regardless, I suspect we will see gold rocket to new all-time highs before President Trump leaves office. 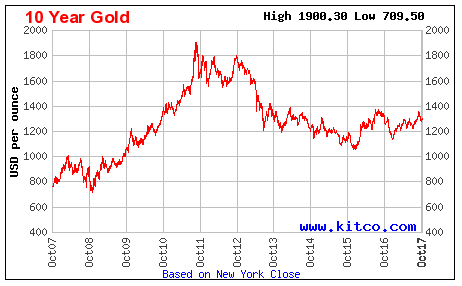 Michael Fitzsimmons
18.6K Followers
Technology stocks, ETFs, portfolio strategy, renewable energy, and O&G companies. Primary goal is growing net-worth. I typically allocate a portion of my own portfolio and devote some of my SA articles to small and medium sized companies offering compelling risk/reward propositions. I am an Electronics Engineer, not a qualified investment advisor. While the information and data presented in my articles are obtained from company documents and/or sources believed to be reliable, they have not been independently verified. Therefore, I cannot guarantee its accuracy. I advise investors conduct their own research and due-diligence and to consult a qualified investment advisor. I explicitly disclaim any liability that may arise from investment decisions you make based on my articles. Thanks for reading and I wish you much investment success!
Follow

Additional disclosure: I am an engineer, not a CFA. The information and data presented in this article were obtained from company documents and/or sources believed to be reliable, but which have not been independently verified. Therefore, the author makes no warranty as to its completeness or accuracy. All readers are advised to do their own research and contact a qualified investment advisor. The author is not responsible for investment decisions you make.