There is a fundamental misunderstanding about the way in which the Federal Reserve conducts open market operations, monetary policy and the impacts of those actions.

Conventional wisdom suggests that the Federal Reserve 'prints' money to buy financial assets, namely treasuries (NASDAQ:TLT) (NASDAQ:IEF) and mortgage-backed securities. Taking this thesis further suggests that the increase in the money supply should have translated to a decline in the value of the dollar and an increase in the rate of inflation due to the excess money creation.

The fact that neither a decline in the value of the dollar nor an increase in the inflation has materialized has puzzled investors and economists alike and has consensus opinion perpetually believing that inflation is right around the corner. Much to the chagrin of these wrongfully informed investors and pundits, interest rates continue to march lower due to persistently low inflation, continued slow growth and ever increasing levels of debt.

Had investors understood the true mechanisms regarding Federal Reserve policies and the fact that there was never an increase in the money supply beyond what has been historically average, the calls for inflation and dollar debasement would have been pushed aside as an incorrect thesis. Due to the ubiquitous nature in which this false narrative has been perpetuated, an incorrect narrative has been ingrained in the minds of the average investor, and professional for that matter, that has caused a constant incorrect call for inflation, growth and interest rates.

Many dogmatic investors will dismiss this attempt at correcting the false information that has plagued the investment community as soon as they read that the Federal Reserve has never printed money, but I will show how this is in fact true and I ask for thoughtful investors to read the entire thesis.

You do not have to take my word for it; on the Federal Reserve website it clearly states that the Federal Reserve has no legal authority to print money. The highlighted section in the picture below explains how the Federal Reserve has never printed money but instead, buys financial assets through a corresponding increase in excess reserves rather than currency creation. Many will say this is the same thing but it is factually incorrect as reserves are not included in M1 or M2 money supply and are not money.

The Federal Reserve Does Not Print Money, They Create Reserves: 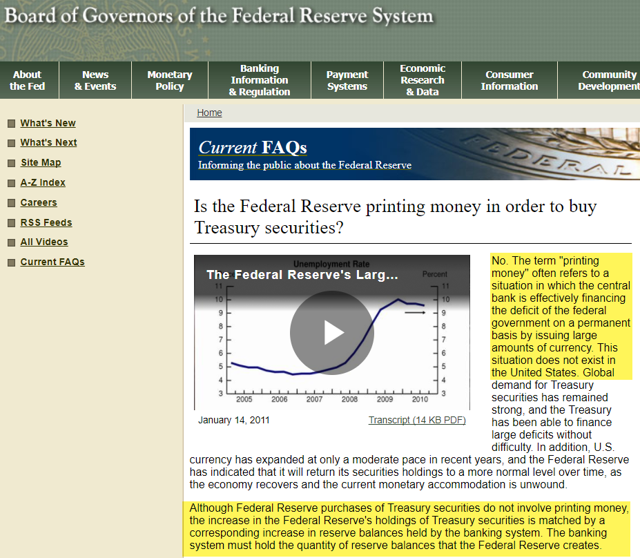 Once a bank loans out their excess reserves, this money is now recorded in M2 and can now be considered "created money."

The fact that there has been no material inflation debunks the idea that the Federal Reserve flooded the system with $4 trillion dollars of "money." They did not. They created that amount in reserves, only a small amount which made it into the public through bank loans.

You can see how, through this process, it is banks that create the money, not the Federal Reserve.

Had the Federal Reserve handed the banks $100 trillion, this money would still have not reached circulation as the banks need to find demand for this money. There is no demand for $4 trillion or $100 trillion in such a short period of time, so instead, the money remains at the banks, collects interest on excess reserves and never reaches the public, thereby never increasing the money supply and never increasing the rate of inflation.

Below are a series of charts that will help illustrate the points that I just briefly summarized.

No Money Has Been Printed But Debt Has Been Added

The charts below will reiterate the thesis I summarized and also provide a counter-view into the true consequences of Federal Reserve policy and also how the recent tightening of monetary policy is a mistake that is leading the economy towards recession at an accelerating pace.

Growth Of Currency In Circulation:

Neither QE1, QE2 nor QE3 can be spotted on the above chart as the process of quantitative easing never involved printing "money" or increasing the money supply; it only increased the value of excess reserves.

The next chart is the same 5-year annualized growth rate but of the M2 money supply. M2 is a measure of the money supply that includes all elements of M1 as well as "near money." M1 includes cash and checking deposits, while near money refers to savings deposits, money market securities, mutual funds and other time deposits. These assets are less liquid than M1 and not as suitable as exchange mediums, but they can be quickly converted into cash or checking deposits.

If M2 contains all elements that are 'near money' yet the growth rate showed no material impact by the three rounds of quantitative easing, then it must be true that the reserves created by the Federal Reserve are not "near money."

The growth rate of M2 can be seen as flat throughout the past few decades, even through rounds of QE, while the monetary base exploded in growth only in this past decade as the Federal Reserve embarked on easy monetary policy through quantitative easing.

To solidify this point, the next chart graphs the nominal value of the monetary base and excess reserves and they can be seen moving together after 2009 and during each phase of quantitative easing.

A low rate of the money multiplier means that banks are not creating a lot of money from reserves. This suggests that banks are not finding the demand for loans or a place to put their reserves. It is not a supply issue; the banks have trillions of dollars of reserves they have the ability to transform into money, but they are choosing to not lend that money out.

This is not a new paradigm as the money multiplier, the rate at which bank reserves are loaned out and transformed into money, has been steadily declining for decades, getting lower each and every cycle.

This lack of demand has to be true because there is not a lack of supply on the part of the banks. As the charts above show, they have a newfound trillions of dollars of reserves (supply) waiting to be loaned out but as the money multiplier indicates, the banks are converting those reserves into money at nearly the slowest pace ever. There is ever weakening demand for loans each and every year that reduces the money multiplier, making each and every marginal dollar of reserve increase (quantitative easing) less and less effective as that marginal dollar will not be transformed into money.

The reason that the demand for loans has decreased each and every year and thus crashed the money multiplier and rendering the process of quantitative easing ineffective is due to increased levels of debt. You cannot solve a debt problem with more debt, and that is what the United States and essentially every other developed country has attempted to do.

It is also the reason that quantitative easing has been ineffective in creating growth. Sure, the stock market (NYSEARCA:SPY) has increased, but the underlying fundamentals of economic growth have not increased as the 10-year annualized rate of growth and inflation are near their lowest levels ever.

The hope surrounding quantitative easing was based around the idea that if trillions of dollars were given to the banks, then the banks would loan that money out and that would increase the money supply, increase inflation and solve the long-run deflationary spiral that we are in that can be seen in the secular decline in long-term interest rates.

The issue is demand for loans, not supply. The supply was increased by the Fed but the demand is something that cannot be artificially created and therefore, those reserves were never created into money and the problem of low growth and low inflation were made worse as debt levels increased.

Now that the process of money creation has been thoroughly covered, and it can be agreed upon that the issue is one of structurally weak demand, not supply.

I briefly mentioned that debt was the cause of ever decreasing rates of growth and inflation.

The next article in this series will cover the unintended consequences of the Federal Reserve policy as well as cover the structural issues brought on by increased levels of debt in great detail.

Please follow my Seeking Alpha page to ensure you receive the next article on the structural debt issue and consider subscribing to my marketplace, EPB Macro Research. There is a two-week free trial so you can try it out risk-free.

My marketplace service focuses on what the right asset allocation is for the current economic situation using just a few ETFs so that you can continue using your own stock strategy within a safer and more balanced portfolio framework.

Eric holds a Bachelor’s degree in economics from New York University and is also a Managing Partner at Animas Capital.

Disclosure: I am/we are long TLT, IEF, GLD, SPY. I wrote this article myself, and it expresses my own opinions. I am not receiving compensation for it (other than from Seeking Alpha). I have no business relationship with any company whose stock is mentioned in this article.

404 Comments
To ensure this doesn’t happen in the future, please enable Javascript and cookies in your browser.
Is this happening to you frequently? Please report it on our feedback forum.
If you have an ad-blocker enabled you may be blocked from proceeding. Please disable your ad-blocker and refresh.