As traders prepare to receive September's CPI numbers Friday, markets are digesting the leading PPI report released Thursday morning that indicated that the producer price index rose 0.4% in September, matching the rise in the median forecast. Although the Fed and traders will undoubtedly take greater signal from Friday's CPI data, with participants - both doves and hawks - now closely tracking any whereabouts of inflation, markets are vulnerable to influence as equities, bonds and gold initially stepped lower after the inflation report, with the dollar finding a modest bid on soundings of rising price pressures.

Granted, deciphering and assigning causation across such an immediate time frame is more chance than skill, it will undoubtedly become the $64,000 question across a much longer time frame, if our suspicion that inflation rises faster than the pace of rate hikes is realized. While the immediate influence on gold and the US dollar is more tail than dog - as the data is obviously viewed in the prism of a rear-view mirror, the longer-term impacts on equities and bonds have yet to be felt.

As mentioned in previous notes, we believe that the equity markets are most vulnerable to surprise price pressures when already historically lofty valuations become squeezed. From our perspective, the intermediate-term impacts on Treasuries is the hardest to gauge today, although we suspect they will eventually be supported (relative to stocks) by the Fed's limited capacity to tighten and the Pavlovian demand from misplaced perennial concerns with the perceived greater deflationary threat. Moreover, although the data may strengthen any hawkish resolve in the immediate term towards future rate hikes this year, ultimately, rising US inflation should have a deleterious effect on dollar exchange rates, as the Fed is likely limited by a maturing expansion against a global backdrop where policy differentials with other large central banks like the ECB are now just beginning to tighten. Simply put, we're on the flipside of the cycle, whereas in 2014, policy differentials greatly supported a stronger dollar.

That said, from a counterintuitive perspective, investors' ears should perk up with the latest buzzword now circulating around the markets of "synchronized global growth."

The economic expansion is about as synchronized as it gets." - Michael Gapen, Barclays Capital Chief US Economist

While there are certainly policy differentials in place affecting the relative performances across global markets, over the past year the tide of growth has risen broadly, harmonizing global growth for the first time since directly after the global financial crisis in 2010. After many years of disparate growth tracts, where some economies were expanding while others contracted, most countries - including advanced, emerging and developing economies - have experienced strong synchronized growth since the back half of 2016.

At face value, unified growth across the world is a strong and positive tailwind, especially when so many developed economies have experienced historically sluggish expansions. Essentially, amplifying and buttressing different countries' respective economies, the net effect has undoubtedly driven the rally over the past year across global equity markets, despite the perceived and headline risks associated with significant issues like Brexit, rising protectionism and gasp - nuclear war. And while Trump is doing his best to take credit for the rally in stocks since the election, the reality is his hand has played little to no part in propelling it and we're likely just witnessing the culmination of moves set in place at the start of the decade.

Some years back we described our concerns with a similar condition that arose globally at the end of the previous cycle. We recall listening to an economist in the summer of 2006 wax poetic about how the 66 largest economies in the world were enjoying a historic and synchronized expansion. Naturally, his takeaway was broadly bullish - implying a sturdy and broad foundation was extended beneath the markets. While that was true for the moment, his observation of the cycle resonated with us in a very different way. If everyone was expanding on the same growth wave, the inevitable contraction would be magnified. 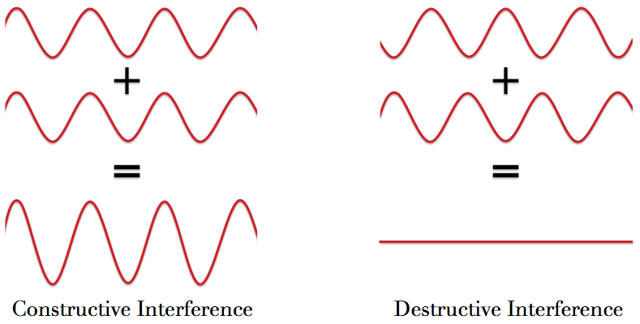 These same wave principals are taught in your high school physics class as a phenomenon known as constructive interference. When two waves become in phase, they form a new wave with an amplitude equal to the sum of their individual amplitudes. Conversely, when two waves of identical wavelength are out of phase, they cancel each other out completely. Often, it's a combination of varying degrees of both destructive and constructive interference that determines the composite structure of the new wave - or in this analogy, the aggregate cycle of the largest economies in the world that had become highly synchronized. Needless to say, our greatest fears were realized just two years later as momentum was translated and magnified sharply lower during the financial crisis. We presented these thoughts back in 2011 in something we playfully called the Constructive Interference Theory (see here).

One could make the counterintuitive argument today that the current bull market in stocks here in the US (the second longest on record) has been greatly helped along by the economic and policy dispersion around the globe that followed in the wake of the financial crisis. Although growth domestically has been historically lackluster, the varying economic conditions and policy approaches throughout the world fostered a composite not-too-hot/not-too-cold scenario, which kept at bay the more destructive concerns of inflation that were levied by many following the Fed's extraordinary policy approach to the crisis. Because of a more coordinated, yet structurally out of phase global policy response since the crisis, the performance baton has been passed with no one region or economy largely upsetting the global apple cart and no one capable of overheating it - because of the varying economic paths taken. With global growth again becoming increasingly in-synch, the vulnerabilities become far greater to experiencing conditions on both sides of the spectrum - all the while as pundits today begin writing the obituary for secular stagnation. 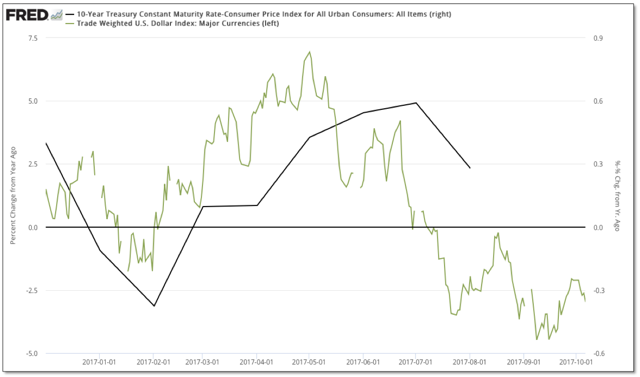 Picking up on some thoughts in our last note (see here), Friday's CPI report should continue the trend higher, as the dollar's year-over-year performance trend has closely led the CPI data (expressed here through the 10-year real yield), which would point towards further advances - notwithstanding the impacts from this summer's devastating hurricane season. Although the dollar index has bounced since the early September low - and a "hot" report might rekindle the retracement move higher in the immediate term, we expect the cyclical shift lower that began this year to once again exert itself and take the next leg down. 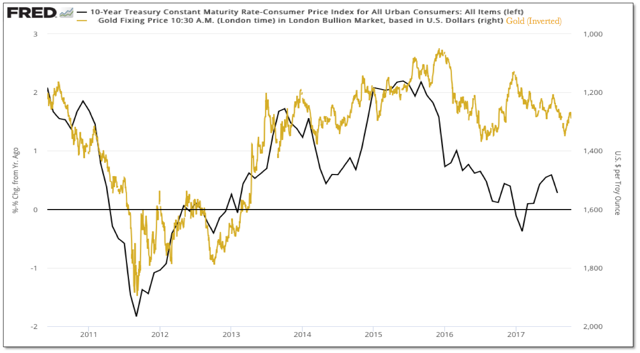 Generally speaking, a weaker dollar should continue to exert pressure on real yields, as we believe the Fed's reach is ultimately limited by an economy in the late stages of a mature expansion. Overall, this should continue to be supportive of gold. 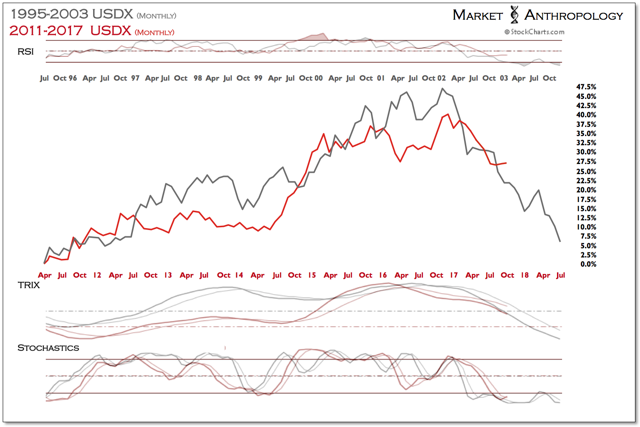 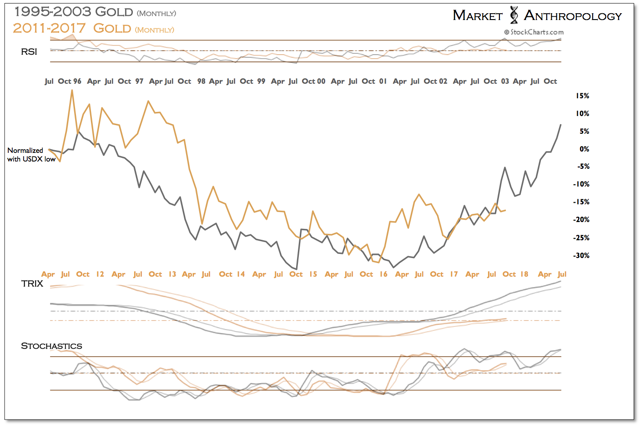 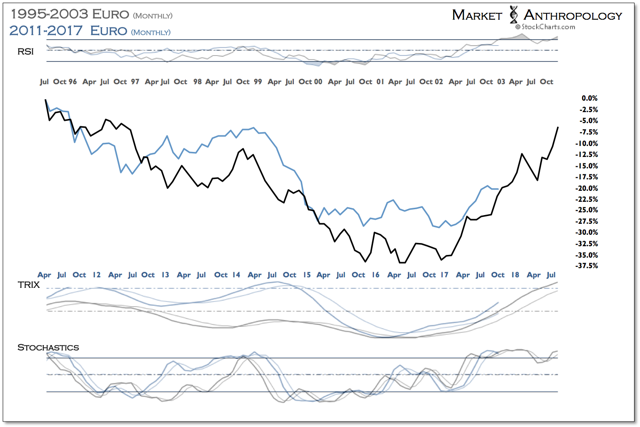 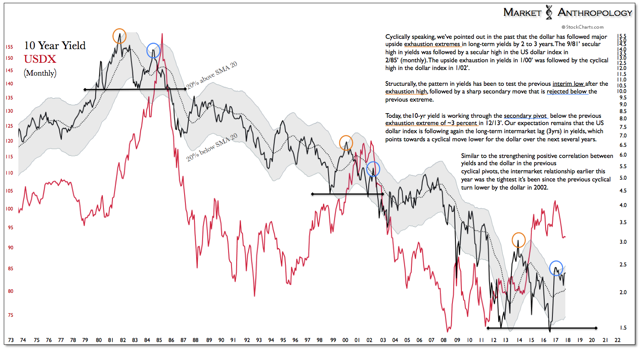 Taking a peak around the globe at our higher beta proxy for Europe, Spain's IBEX retraced more than 10 percent since setting a high this May. At that time we had noted that the more than 45 percent rally in the IBEX (from the post-Brexit lows less than a year) looked extended (see here). Quickly forgetting the real structural challenges still present within the EU or that perennial asset unwinds have very long tails across very long timeframes... conventional wisdom had now turned and viewed Europe as a great opportunity relative to US markets. Sizing up the IBEX relative to the historic Nikkei comparative that we've followed and utilized for guidance in Europe over the past 4 years, the swift retracement rally had met the comparative highs of the Nikkei in late March 2000. From a basic technical perspective, the retracement level simply represents a long-term technical hinge, as a potential higher high would greatly re-establish a bullish long-term trend. To date, the level was rejected in May. 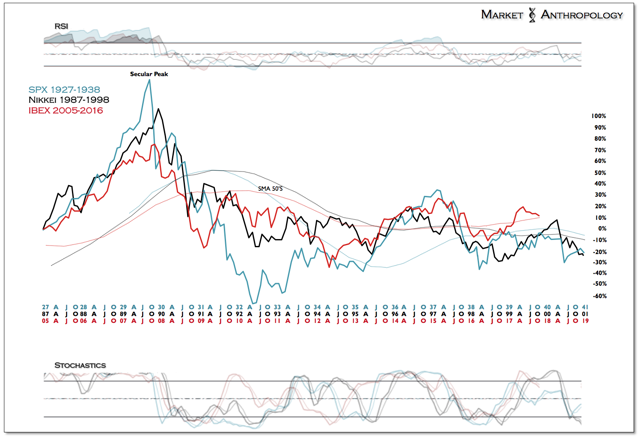 Speaking of higher highs, Japan's Nikkei this week is flirting with its highs from the summer of 2015. Although it hasn't broken out like US markets, similar to the S&P 500's test of the long-term trend line from the 1987 high, the Nikkei has rallied sharply since the lows in early 2016.

Although both markets look constructive from a purely long-term technical point of view - we know that from a valuation perspective they are both historically stretched and vulnerable to breaking below support in a more protracted downturn. 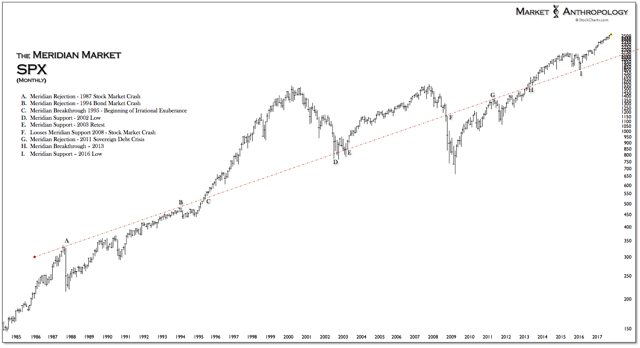 Moreover, from a trend perspective, we're inclined to view the retest of support in the yen as more long-term bullish. And although both the yen and the Nikkei have recently traded together away from the negative correlation extreme seen throughout 2014 and 2015, on an absolute basis we would prefer the prospects of the yen. 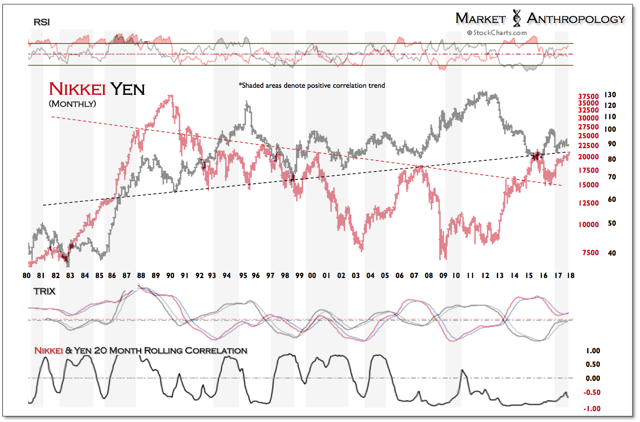 Market Anthropology
487 Followers
Market Anthropology is an independent journal of financial market research, produced and edited by Erik Swarts. The work provides a unique and novel perspective on global capital markets -- including equities, commodities, currencies, and yields. A wide ranging composite read of both quantitative insights, the journal offers intuitive market research and timely commentary.
Follow
3 Comments
To ensure this doesn’t happen in the future, please enable Javascript and cookies in your browser.
Is this happening to you frequently? Please report it on our feedback forum.
If you have an ad-blocker enabled you may be blocked from proceeding. Please disable your ad-blocker and refresh.