Philip Morris International (NYSE:PM) missed on earnings. To be exact, by $0.11 under consensus estimates. Well, the market had a mini-freak-out: 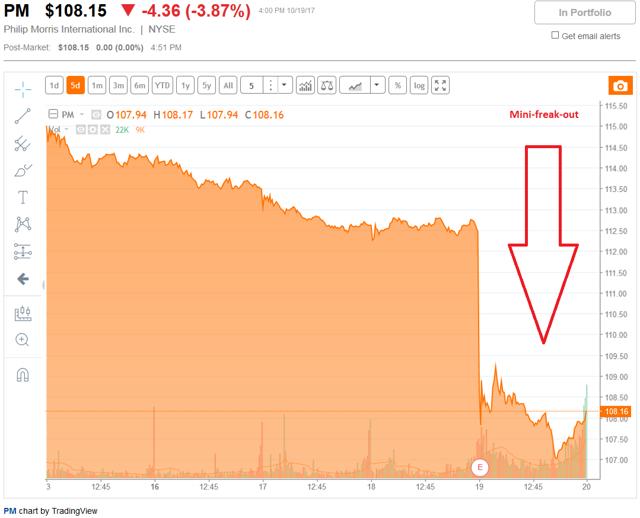 Should the price have dropped this far? That’s up for debate. However, on the pessimistic side, PM has had two bad misses in a row. In Q2 2017, Philip Morris missed consensus estimates by $0.09.

“Thank you, Nick and welcome ladies and gentlemen. We’re pleased by our third quarter performance, notably reflecting very strong currency and financial result, including growth in adjusted diluted EPS of 11.2%; sequential improvement in our total shipment volume performance supported by both cigarettes and heated tobacco units; higher total international market, excluding China and the U. S., and the continued positive momentum for IQOS in all geographies, particularly Japan and Korea.”

Well, that doesn’t exactly sound pessimistic. Management wasn’t too down about this quarter, and for good reason. 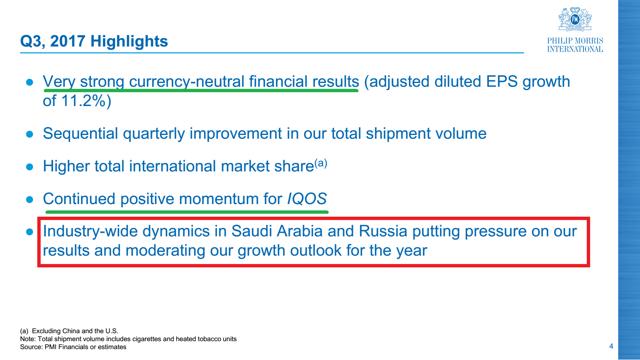 Ex-currency results were fantastic. Additionally, IQOS continues to see positive momentum. The primary reason I believe PM to be such a good investment is their new IQOS technology.

“However, industry wide dynamics in Saudi Arabia and Russia that we have flagged previously are putting pressure on our results and moderating our growth outlook for the year. In Saudi Arabia, the significant excise tax increase in June, which resulted in the doubling of retail prices, is currently driving higher than anticipated declines in cigarette industry volume, especially in the highly profitable premium segment where Marlboro is the leading brand.

In Russia, cigarette industry volume is also softer than expected, while net pricing in the market remains constrained by the competitive environment. We are therefore revising our 2017 reported continue reported diluted EPS guidance to a range $4.75 to $4.80 at prevailing exchange rates. Our guidance also now includes approximately $0.17 of unfavorable currency compared to $0.14 previously due principally to Egyptian pound. Excluding currency and the favorable $0.04 tax item recorded in the first quarter, our guidance represents a growth rate of approximately 9% to 10% compared to our adjusted diluted EPS of $4.48 in 2016.”

Notice how management “flagged previously” that there was going to be pressure on results. They even showed a slide on the Q2 2017 presentation guiding for negative currency impact: 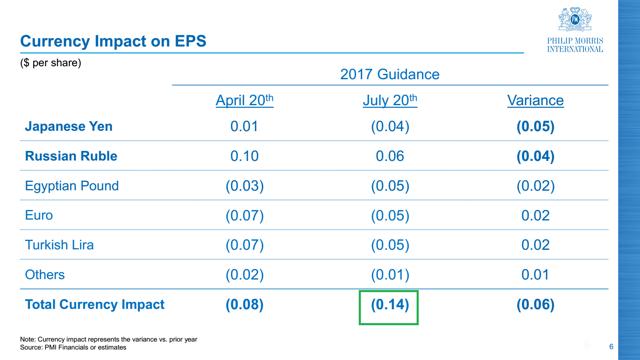 On a positive note, PM is guiding for positive currency variance on their diluted EPS for Q4 2017. From Jacek Olczak:

“Additionally, for the fourth quarter, we estimate the positive currency variance on our reported diluted EPS at prevailing exchange rate. This is due to favorable comparison related to the Egyptian pound, which has an adverse transactional currency impact on our results in the fourth quarter of 2016 due to its significant devaluation versus the U. S. dollar.” 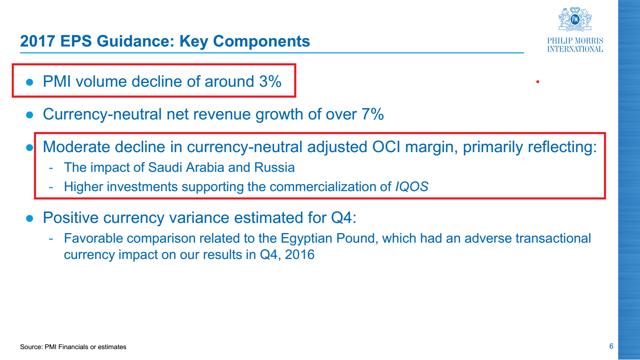 Couple things to note here. One is PMI volume being down around 3%. However, this is on the low end of the range management expected earlier in the year. Management guided for PMI volume to be down 3% to 4% earlier this year. Philip Morris expects a moderate decline in their adjusted OCI margin for the year. The high investment for commercializing IQOS is a good reason. The impact from Saudi Arabia and Russia is annoying, but this was something PM saw coming and flagged. 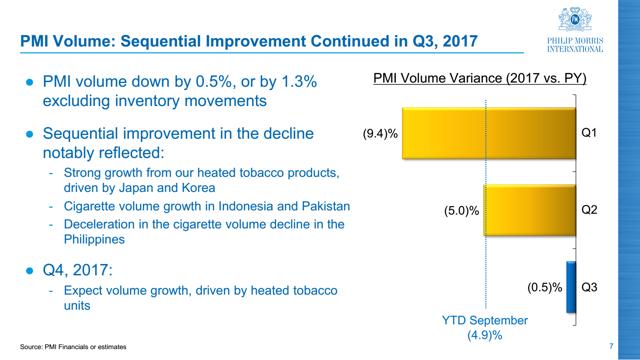 They are all going up 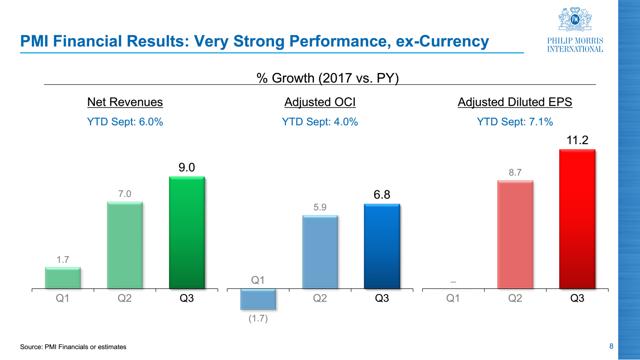 These numbers are very useful. This lets investors know that the company is continuing to see strong growth. Yes, there was a negative currency impact. But Philip Morris is showing growth in selling their products. Occasionally, you will get a note like this on the earnings call from a company selling internationally:

“Please note that our third quarter financial results on a reported basis were impacted by the Egyptian pound, which depreciated by approximately 50% versus the U. S. dollar since the third quarter of 2016, based on average quarterly rate and contributed approximately $0.08 of the total $0.12 negative currency impact in our EPS.” 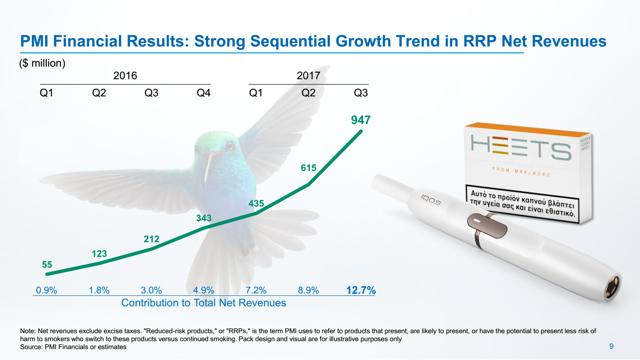 For investors unaware, “reduced-risk products” or “RRPs” is what Philip Morris has been testing overseas – aka the IQOS technology. The conversion rate for smokers who try IQOS has been substantial. Further, IQOS is massively safer for the smoker and those around them (according to PM’s research). This is the product that Altria Group (MO) is trying to bring into the US.

The drop in price is silly 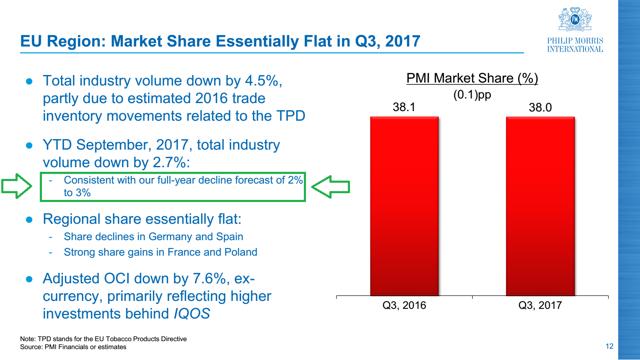 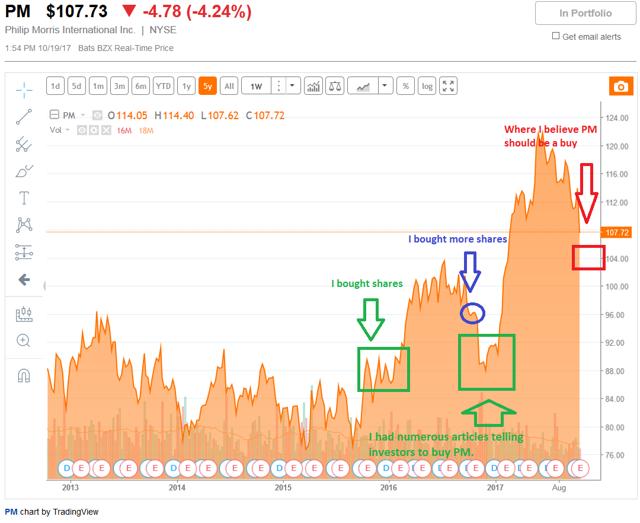 Philip Morris does a fairly good job letting investors and analysts know what’s going on in the industry. However, the stock has been all over the place the last couple of years. I bought shares in the first green box and the blue circle. When the stock dropped to the second green box, I published numerous articles telling investors PM was at a fantastic price. I currently believe PM is a great hold candidate for anyone holding onto shares. My basic view for PM and MO is to buy at an attractive price and hold forever. Since the price started dropping, I’ve put a red box around where I’ll start publishing buy ratings. At the current price, PM is a great hold investment flirting with a buy.

PM’s cash flows have been lower because they had massive capital expenditures. The expenditures were invested to build factories for the new IQOS product. Dividend raises were small because of the cash being used for the future of the company.

With the biggest expenditures behind PM, the company will reap the rewards in the future. I expect IQOS to drive revenues higher. Dividend growth should quickly follow.

Colorado Wealth Management Fund
57.5K Followers
Author of The REIT Forum
The #1 REIT Service For Those Targeting Strong Total Returns
You want to be on The REIT Forum because it is the #1 REIT research service on Seeking Alpha measured by returns. Period. See our Tipranks page. How did we get there? We did a better job of managing risk and discovering opportunities. We didn’t jump into trashy high-yield equity REITs with the rest of the crowd. We cover securities for trading and securities for the buy-and-hold investor. We are clear about the difference and that enabled us to perform better since inception and better in 2020.

Disclosure: I am/we are long MO, PM. I wrote this article myself, and it expresses my own opinions. I am not receiving compensation for it (other than from Seeking Alpha). I have no business relationship with any company whose stock is mentioned in this article.

Additional disclosure: No financial advice. Investors are expected to do their own due diligence and consult with a professional who knows their objectives and constraints. CWMF actively trades in preferred shares and may buy or sell anything in the sector without prior notice. Tipranks: No ratings in this article.