Normally ETFs are based on indices and a few are actively managed. (AIEQ) is the first ETF which is managed by an AI algorithm (The "EquBot Model"). I believe this will be one of the biggest innovations in the financial industry and will allow retail investors to gain access to AI strategies which would have otherwise been limited to specialized hedge funds.

This ETF launched on October 18 and is relatively new so there's no performance data to go by, however since the AI is able to constantly learn based on new financial information it should theoretically improve as time goes on.

Humans often let their biases and emotions, such as greed and fear, get in the way of making money. We might panic sell or buy into a bubble. An AI system is able to avoid and actually exploit these biases in order to gain alpha. AI systems take several inputs, such as over a million indicators (sourced from regulatory filings, quarterly reports), social media posts and news articles for 6000 companies for this ETF and use that data to build predictive models. It's sort of how the S&P500 CAPE can be used to predict long-term returns of the market, except it's a lot more advanced and uses a lot more data. It can then use those models to pick stocks which are expected to have the lowest amount of risk and provide the greatest returns while looking to minimize overall portfolio volatility (by looking at stock correlations and adjusting weights).

So let's go through a brief history of AI technology. In 1997, IBM (IBM) developed a chess-playing supercomputer called Deep Blue which was able to beat Garry Kasparov, a world champion. However, to be able to do this they required a supercomputer since it was brute-force based (having to go through every possible combination). This technology was revolutionary at that time and inspired the development of modern AI systems.

The IBM Watson computer was then developed in 2004. It was developed in order to be able to win Jeopardy. In 2011 it was able to beat champion Jeopardy players and won $1,000,000 in a competition. It uses an algorithm to scan hundreds of answers (or "questions" in Jeopardy) and ranks them by confidence. If Watson is in the lead it will risk less and only buzz into questions/clues when it's confident in the answer ("question"). It will also wager an amount based on the confidence and how far ahead/behind Watson is in order to wage the optimal amount. There's a short quick overview below and a full episode under it (warning: the editing is a bit rough in the second video).

IBM Watson has since evolved into a cloud-based AI platform. It provides a platform for developers to create AI-based algorithms without needing a supercomputer. It's able to understand and analyze unstructured data and understand language naturally as a human would. It's also able to predict your personality. It has applications in healthcare, finance, ecommerce, politics, biotech, and many other fields. You can learn more about IBM Watson at IBM's website. They have a demo of personality insights so you can check out how well it predicts your personality based on your Twitter or other writings: designer match and celebrity match (matches you with a celebrity based on personality and values).

IBM Watson is able to analyze structured data (data which are in tables like spreadsheets) which include financial statements, as well as unstructured data such as news articles or social media posts. The AI is trained to recognize patterns and can use that to predict things of new inputs. One thing IBM Watson can do is predict the tone of news articles (i.e. whether it's positive or negative). The ETF's AI uses news data combined with other financial and social media data to predict which stocks will have the highest growth potential while minimizing risk.

The model ranks stocks based on which ones will likely benefit from economic conditions, trends and world events and selects the top 30-70. The model also decides how much to weigh each stock (capped at 10%) based on potential growth and correlations in order to improve risk-adjusted portfolio returns. It aims to match the volatility of the broad equity market and should provide an opportunity for outperformance.

You can look at its latest holdings on the ETF's web page. They are likely to change constantly so check on the web page for the latest holdings. Below are the holdings as of October 25.

The fund's holdings may change constantly since the fund is analyzing stocks daily so it would not make much sense to go through each stock in detail. As of October 23, according to Morningstar, it had Genworth Financial (GNW) as it's 3rd highest holding at 4.4% but no longer holds that as of today. I'm going to post charts from Morningstar below, they're a few days outdated but I'm going to post it so you can get a sense of what it's holdings are like. As you can see below it holds a significant amount in small cap (47%) as well as microcap stocks (15%). This is because the fund analyzes 6000 US stocks to find the best ones, microcap or large cap.

It also offers attractive value ratios with P/E of 13.2 compared to Morningstar's assigned benchmark (the Russell 1000) which has a P/E of 20.6, P/B is 0.95 vs. 2.81, P/S is 0.76 vs. 2.10, Price/Cash Flow is only 2.82 which is EXTREMELY lower than the benchmark's 11.63. Long-term earnings projections are also higher at 12% compared to the benchmark's 9.80% and had a much higher historical earnings growth of 10.84% vs. the benchmark's 4.54%. If you're looking at just the numbers then the AI does an excellent job in finding value, beating all the value ratios. The fund is tilted towards value stocks with high growth potential. The portfolio will change often so it may shift its holdings depending on economic conditions.

The portfolio as of Oct 23 (latest Morningstar has) was concentrated in financial services (33%), healthcare (20%), consumer cyclical (18%) and industrials (15%). These sector allocations will shift based on economic data and market trends. 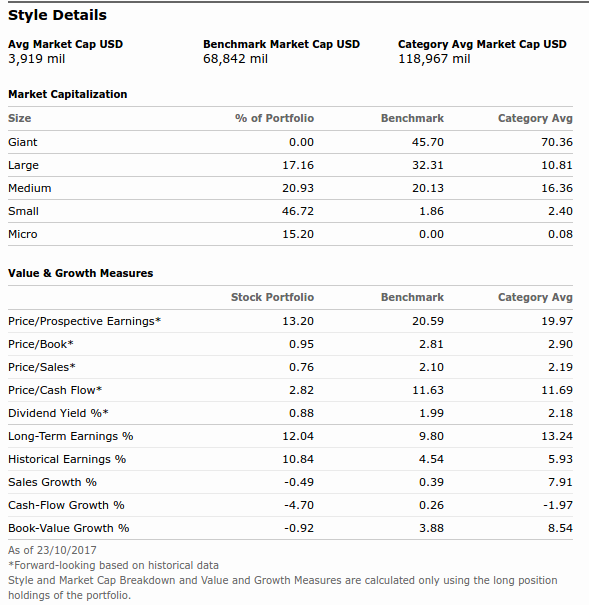 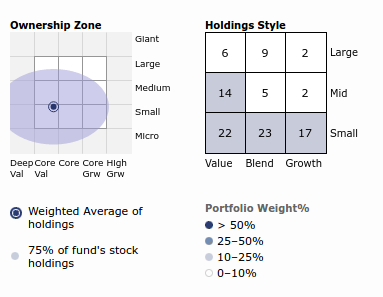 It has an expense ratio of 0.75% which is expensive compared to passive ETFs such as SPY, however, it's one of the only ways for retail investors to take advantage of AI technology and has a lower expense ratio than many actively managed funds. It's able to analyze 6000 stocks daily which is something no individual investor or even a large team of analysts would be able to do (it would also certainly be expensive) and would only be found at specialized hedge funds. There is also no minimum investment in this ETF or high fees that hedge funds require.

The fund already has $67M in assets from the first week and I believe that it may gain popularity with larger investors due to its relatively low cost and because of the flexibility and liquidity than an ETF provides. The ETF had a volume of 440,000 shares yesterday so liquidity should not be a concern. However, if the fund becomes huge that may cause issues with it holding microcap stocks since they won't have enough liquidity, however, the AI will likely change its behavior if that happens and the fund has lots of room to grow. We'll see as time goes on how it performs but I believe it will offer stronger performance compared to the market.

Steven M. Williams
480 Followers
A Canadian. I focus on mostly on non-mainstream ETFs and international economies. Do you have any requests for me to write on unique ETFs or are there any countries that you want me to write a report on? Please let me know, feel free to message me.
Follow

Disclosure: I/we have no positions in any stocks mentioned, but may initiate a long position in AIEQ over the next 72 hours. I wrote this article myself, and it expresses my own opinions. I am not receiving compensation for it (other than from Seeking Alpha). I have no business relationship with any company whose stock is mentioned in this article.