A popular chart making the rounds today is this one from Gallup, which shows the daily tracking of President Trump's approval and disapproval ratings. As shown, just ahead of grand jury indictments concerning former members of his campaign staff, the President's approval rating is sinking like J.C. Penney (JCP), while his disapproval rating looks closer to Apple (AAPL) as it just broke out to new highs.

While these charts always make for some good conversation, their utility stops right about there, especially when it comes to the market. The chart compares the performance of the S&P 500 to his approval rating throughout Trump's Presidency. Even as Trump's popularity plumbs new lows, the S&P 500 has been going in the exact opposite direction.

Sure, the President may be unpopular, and based on his approval ratings, there's only a one in three chance that anyone reading this approves of the job he is doing. Like him or not, though, never let politics impact your investment decisions. 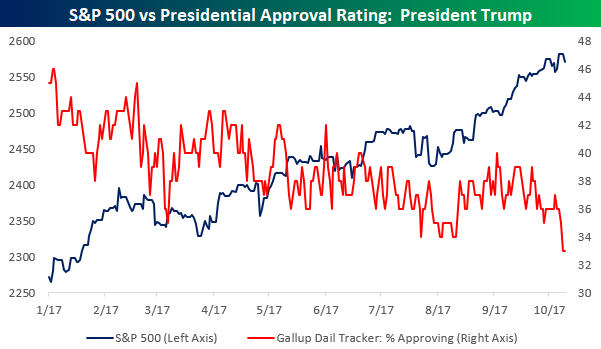 Bespoke Investment Group
45.67K Followers
Bespoke Investment Group provides some of the most original content and intuitive thinking on the Street. Founded by Paul Hickey and Justin Walters, formerly of Birinyi Associates and creators of the acclaimed TickerSense blog, Bespoke offers multiple products that allow anyone, from institutions to the most modest investor, to gain the data and knowledge necessary to make intelligent and profitable investment decisions. Along with running their Think B.I.G. finance blog, Bespoke provides timely investment ideas through its Bespoke Premium (http://bespokepremium.com/) subscription service and also manages money (http://bespokepremium.com/mm) for high net worth individuals. Visit: Bespoke Investment Group (http://bespokeinvest.com/)