The Big Mac price has been steadily increasing over the years, along with inflation.

Official government inflation rates are being outpaced by the Big Mac price itself.

The potential inflationary pressures from the Fed's easy money will push inflation much higher, but, we won't ever know from official data.

The Big Mac Index is a light-hearted attempt to demonstrate Purchasing Power Parity (NYSE:PPP) between countries using a basket of goods. That basket of goods is just one thing: The McDonalds Big Mac (MCD); the indicator was created in 1986 by The Economist magazine. But, instead of showing the difference between any one nation and its relative burgernomics, I wanted to show official data released by the United States Bureau of Labor Statistics i.e., CPI inflation, and the actual price of the Big Mac over a period of time. There is a large disparity between the two. It is often said that the CPI data is off by a long shot. And, perhaps this is "proof" of that when you track the actual price of something that is consumed by Americans. 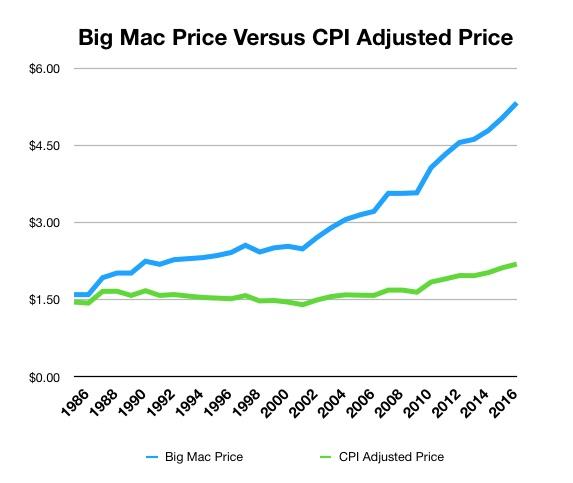 The green line shows how much, inflation-adjusted, two all-beef patties, special sauce, lettuce, cheese, pickles, onions on a sesame seed bun would cost in 1986 dollars. If you believed the government's numbers, your $1.80 Big Mac from 1986 costs only $2.43 today.

Once you inflation-adjust the price of the Big Mac, as I did in the green line, that line - theoretically - would be as flat as a board. After all, the ingredients are exactly the same as well as the labor (Labor costs would be factored in). Instead, the $2.43 price is some 22% higher than the 1986 price. In other words, because of inflation, everything is costing more to purchase.

Take a good look at this chart specifically peeling your eyes to roughly 2001 and 2008. Both of these time-periods saw ultra-loose monetary policies (both periods following a recession). The effects of this are visual in the price jumps you see for a Big Mac.

While price increases are a factor of inflation, the government's data would have you believe that the increases are small compared to what we are actually paying.

The data that the government puts out is out of touch with what is actually happening. I see it everywhere when I go out to lunch. I believe this "issue", or disconnect is going to be far more problematic in the future with the sheer amount of funds the Fed pumped into the economy back in 2009. 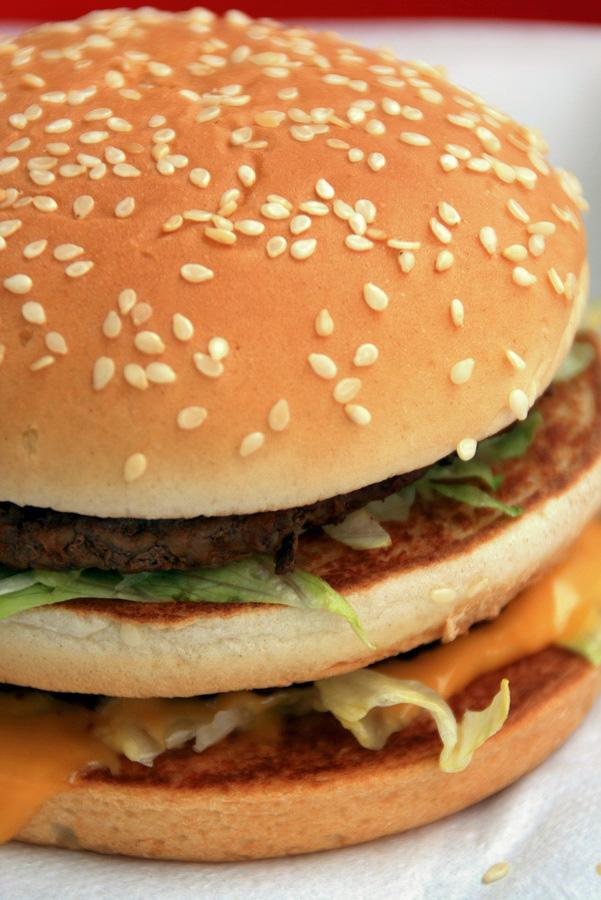 Okay, and now to stop my comment box from lighting up with every argument that discounts every aspect of this. The Big Mac Index is lighthearted, so says the inventors of the index, The Economist Magazine. The main focus for the index is the Purchasing Power of a currency relative to another currency. The theory behind the index is that the price of a Big Mac should necessarily be about the same based upon exchange rate, discounted for the price of labor from one country to the next.

That is not what I am trying to show here. Instead, I am showing that the price of a Big Mac has gone higher. During that same period of time so has inflation. However, what the government has reported versus what consumers are actually paying are not the same. It should be noted that I used the inflation numbers for All Items, Including Food.

I am not a conspiracy theorist. But, I am a consumer. I shop around just like the next person. And, it seems more and more every time I look at the price of something, anything, I am almost always baffled by the cost for whatever the item is. The numbers I am trying to show, along with the visual graph, is that there is a disconnect.

But, it is not just food. It is other items, such as rent. I live in both Colorado and San Francisco, California; I split my time between he two areas. Rent in Denver Colorado is up 2.7% from the year previous to current. The 1-year change in the inflation rate is only reported at 2.2%, a difference of 0.5%. I won't even bother with figuring out the price difference in rent for San Francisco as I would likely have a heart attack.

Wage growth was reported yesterday. The increase was 0.4% higher than the previous month. Good news. But, real wages are a far cry from keeping up with price increases. Consumers are finally eclipsing the highs in incomes seen all the way back in 2000. Prices for nearly everything have eclipsed year-2000 prices almost immediately:

The Federal Reserve Needs To Act:

I see a huge disconnect here. I also see the Federal Reserve getting themselves into hot water over this issue. The fact that individuals cannot afford the simple things in life, like a Big Mac, and yet, the Fed is keeping their eye on core PCE inflation numbers as their gauge of what they believe prices are doing is problematic. The effects of Quantitative Easing are going to exasperate prices and the Fed will not see this materialize in their key indicators. At the same time, wages, albeit moving higher, are lagging significantly behind the pace of costs.

Millenials are already marginalized with education costs saddling them with debt. Homeownership is not even a dream of theirs. And, take away their ability to buy a burger and it might be the start of Armageddon.

The Federal Reserve is in the process of letting the bonds they purchased merely expire instead of rolling these bonds into new instruments, thereby removing the money from the economy. This easy approach is going to be too soft and too slow. I believe, and have believed, that the Fed is going to have to move faster to catch up to reality. Read: Interest rates are going to have to go higher. And, the government is going to have to come to terms with their reporting numbers, lest they lose all aspects of credibility.

Follow D. H. Taylor and get email alerts
+
Add a comment
Disagree with this article? Submit your own.
To report a factual error in this article, click here.
Your feedback matters to us!