As US equity exchanges clang out record after record, home prices appear to be singing from the same hymnal in almost perfect harmony (see Figure 1, below). While borrowing costs remain largely at historic lows, the main driving force here is a toxic mix of ever-shrinking supply of both existing and new homes across many markets nationwide. National existing single-family home inventory has hovered around 1.9 million units since April. This translates into a 4.2-month supply through the end of September, down 6.7% year-over-year (YOY). New home inventory levels offer scant relief for what in many markets is becoming a housing shortage-a scenario further exacerbated by the natural disasters in south Texas, Florida and now northern California. While new home inventory through September posted a 5-month supply, construction starts sorely lag historic averages. Through the end of September, the average number of starts on single-family homes since 2008 are roughly half that of the average over the period 1959 through 2007. August saw a 6% YOY post from the S&P Case-Shiller Home Price Index-the largest YOY increase since July 2010. Seattle led the Index with a staggering 13.26% YOY increase-one of 12 metropolitan statistical areas (MSA) in the 20-MSA Index exceeding the national average for the month. The national median price of an existing home is now $245,100. For new homes, the median national price is $319,700 through the end of September. Meanwhile, the average hourly wage on private nonfarm payrolls came to $26.53/hour through the end of October, an increase of 2.43% YOY. Headline inflation came in at 2.2% YOY through the end of September. This means wages are growing roughly at the rate of headline inflation while national housing prices are growing at the better part of three times as fast over the same measuring period. 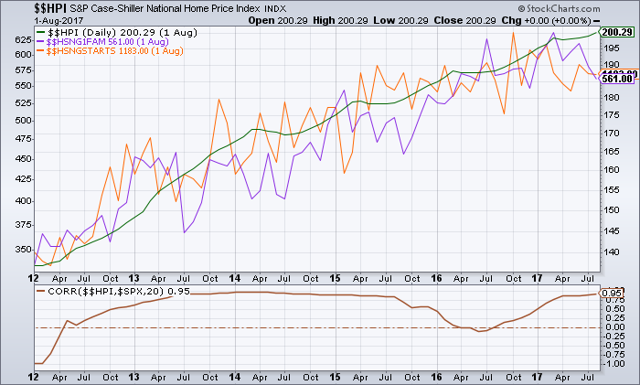 Underlying housing fundamentals aside, the Republican tax cut proposal released last week (2 Nov) sent cold shivers through the housing market, already shivering from a plethora of possibly debilitating headwinds over the medium term. Having given up on a deficit neutral tax reform package, Republicans pushed through Congress a budget template for a $1.5 trillion increase in the deficit over ten years. For the Republican leadership, this set into motion not only a scramble to find offsetting revenue streams to escape the label of spending profligacy-the same blunt object with which deficit hawks had long bludgeoned Democrats. The $1.5 trillion target allows the package to be considered in the Senate under the all-important reconciliation rules-and a simple majority vote. With a 52-seat majority in the Senate, Republicans could pass the package without a single Democratic vote. Eliminating or at least limiting the mortgage deduction, after being denied the rich mother lode of revenue from destination taxation, became a growing necessity to at least give the illusion that the program's math really works.

Economists have long argued that the mortgage deduction distorted the housing market. The deduction has historically favored homeowners over renters, rich over poor. The deduction has arguably uprooted century-old demographic patterns by encouraging homeowners to acquire bigger, ever-more tax-advantaged homes. More recently, the deduction has undermined the historic mobility of American workers who in the past were able to move to job-rich corners of the country in the face of changing local economic conditions.

The current proposal will cap mortgage interest deduction to $500,000, down from $1 million under current law. Of the 7.7 million single family home mortgages originated last year, about 7% of the total exceeded the proposed $500,000 threshold, according to trade publication Inside Mortgage Finance. For home builders, the proposal further squeezes up-market development projects where earnings are far more lucrative. In this way, the cap would likely limit up-market purchases, particularly for those who must go into the credit markets to finance their purchase. Investors were quick to take notice of the seeming dichotomy: Stocks of homebuilders fell sharply at the announcement with Lennar (LEN) falling 3.26%, KB Homes (KBH) falling 4.2% and high-end builder Toll Brothers (TOL) plunging 7.14% in Thursday trading (see Figure 2, below).

Of course, housing markets across the country do not hail from the same bolt of cloth. West coast markets from San Diego to Seattle are home to some of the most expensive existing and new home markets in the country. Los Angeles MSA home prices are 32% higher than the 20-MSA composite in the S&P Case-Shiller Home Price Index-the highest differential in the Index. San Diego MSA is 22% higher than the Index, San Francisco MSA is 21% higher, Portland MSA is 10% higher and Seattle MSA is 14% higher. Here on the east coast, Boston MSA is 1% higher, Washington DC MSA is 10% higher and Miami MSA is 13% higher-all through the end of August. (The New York MSA is actually 5% lower than the national Index though starting from a higher base.

Politically, the Republicans have a 47-seat majority in the House and a famously thin 2-seat margin in the Senate. The California congressional delegation currently fields 14 Republican members. The Oregon delegation has 1 Republican member and Washington state has 4 for a total of 19. New York fields 9 Republicans and the New Jersey delegation has 5. Florida adds 16 Republicans for a total of 49. On paper, the House holds much better odds of passing the package. That said, be mindful that the $1.5 trillion budget authorization passed by just 4 votes in the House.

In the Senate, there are two major obstacles to passage. The most obvious headwind is the Republican 2-seat majority-a margin that carries little room for maneuver. Senators Bob Corker (Tennessee) and Jeff Flake (Arizona) will not seek re-election in 2018 when their respective terms expire. Both could bolt leadership instructions with little or no political backlash. The two senators have infamously frosty relations with the President, a chill that has spilled forth copiously in the media. Senators John McCain (Arizona) and Thad Cochran (Mississippi) are medical question marks. The 81-year old McCain has an aggressive brain tumor while the 79-year old Cochran has chronic urinary issues that have largely kept him off the Senate floor and out of Washington. Senator Rand Paul (Kentucky), currently recovering from a recent attack that left him with fractured ribs and lung contusions, is now a short-term medical uncertainty--adding to his wildcard status as one who voted against the Republican leadership twice on two previous Senate efforts to repeal and replace the Affordable Car Act (ACA). And then there is Susan Collins (Maine) who also drew national attention for her opposition to the Senate ACA replacement plans. This places 6 senators in play as wildcards to the passage process.

The second Senate hurdle comes with the Republican leadership's reconciliation play. The budget resolution passed by both chambers allows a $1.5 trillion uptick to the deficit over a ten-year period. Ideology aside, if the final package exceeds $1.5 trillion, the simple majority rules are nullified by the Senate Parliamentarian and a 60-member vote would be required for consideration of the package on the Senate floor. In its current draft, the Republican tax cut proposal comes in with few dollars to spare, just under the $1.5 trillion. Yet these are the beginning innings of the legislative process and each loophole in current law has at least one lobbyist defending the interest. Senate passage of the measure outside of the reconciliation process is close to zero.

The plot thickens further: The kissing cousin to the mortgage question is the issue of property tax deductions on federal returns-another of the revenue plums needed to keep the $1.5 trillion allotment on track. The same states largely remain in play. The proposed program calls for a cap on property taxes at $10,000 and only primary residences would count toward the limit. Interest on home equity and lines of credit would be disallowed. While 7 states have no income tax authorization on the books, all 50 states assess and collect taxes on property.

High-tax states with concomitant deductions encourage big government-a long-held premise of Republican ideology. Ronald Reagan tried to end the deduction in the last reform attempt in 1986. Then, a very unholy alliance of disparate members from equally disparate localities joined forces with myriad private sector interests in response to the challenge. The deduction survived. Fast forward to 2017, this iteration will likely play out in similar fashion. Roughly 3.7 million US households paid more than $10K in property taxes in 2016, according to National Association of Home Builders data. Sacred cows are difficult to put out to pasture.

The impact of the proposed change on mortgage deductions in high-tax states on either coast where most of the above-threshold mortgages are concentrated will be no less than singular. With passage, the potential drop in home values in affected housing markets could quickly flip relatively new homeowners into the throes of negative equity and could even trigger a housing recession in select markets across the country as home values adjust to new tax realities. The refinance market in many of these affected markets would simply wither. Nationally, a more likely outcome would further exacerbate the growing morass of rising home prices and falling demand in the US housing market.

The dance of legislation has just begun and no one really knows just how many chairs will remain in the mix when the music finally stops. What we do know is this: It will be a long and tedious dance to the finish with many musical fits and starts along the way.