[From the Quarterly Journal of Austrian Economics.]

A review of Andrew Carnegie: An Economic Biography by Samuel Bostaph. 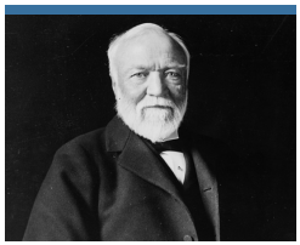 Entrepreneur Andrew Carnegie (1835–1919) emigrated to the United States from Scotland at age 12, working entry-level jobs (bobbin boy, messenger, telegraph operator) that taught him about the importance of initiative and self-taught education. At age 17, Carnegie became a railroad superintendent’s personal secretary when his employer discovered he could read and write. He became privy to challenges faced by railroads, and was enterprising enough to grasp opportunities for improvement and self-enrichment. Trusted with greater authority, Carnegie learned about investments and cost-accounting, was promoted to railroad superintendent, and formed a company to manufacture iron for rails. Carnegie also invested in coal, express, horsecar and oil companies, and owned $400,000 in assets ($6.8 million today) by age 33 when he wrote a memo to himself vowing to set aside his business affairs and devote his time to philanthropy, formal studies and a public policy career. He achieved the philanthropic goal but not before playing a key role in creating the first billion-dollar U.S. corporation.

Non-economists (MacKay, 1997; Nasaw, 2006) have authored other Carnegie biographies. Univ. of Dallas Emeritus Professor of Economics Samuel Bostaph has written a biography that is engaging on several levels. First, Bostaph applies economic ideas about entrepreneurism, production and protectionism to Carnegie’s commercial activities. He contrasts Carnegie’s commercial acuity with his self-serving use of lobbying, tariffs and other forms of crony capitalism. Second, Bostaph explains, in some detail, technological advances within the iron and steel industries. Finally, he presents a side of Carnegie that should not be ignored: international peace advocate and opponent of imperialism who bought a replacement to avoid military conscription in the Civil War.

Bostaph begins by explaining three theories of entrepreneurship developed by Frank Knight, Israel Kirzner and Joseph Schumpeter. He uses the concept of Kirznerian entrepreneurial action for explanatory purposes to place Carnegie “firmly in the context of the market process.” Bostaph identifies Carnegie as an entrepreneur in “a Schumpeterian sense: strong willed and eager to gain social power, yet innovative in his introduction of new products, processes and forms of business organization.” These production processes are a recurring theme. Carnegie’s father and ancestors were handloom weavers paid piece rates for weaving damask. Weavers were vulnerable to downturns in the market for fine linen goods, centered in Dunfermline, Carnegie’s hometown. Yet within two decades of Carnegie’s birth the industry was virtually defunct due to technological advances. This experience and others made Carnegie alert to the future. He saw innovation as a key competitive means for increasing market share.

Following is Bostaph’s description of the production process that led to construction, in the early 1870s, of one of the U.S.’s largest steel mills, 12 miles south of Pittsburgh:

With the availability of the low phosphorus iron ore of the Lake Superior region and the high quality coke made from the coal of the Connellsville area, he (Carnegie) decided it was now possible to use the Bessemer process to produce steel in the quantities needed, and at a low enough cost, to replace iron rails with those of steel. (p. 42)

He further describes the process as follows:

Coke was a key ingredient of iron and steel making. The anthracite coal of eastern Pennsylvania contained very little impurities and was viewed as a natural coke. Coke also could be made by heating the softer bituminous coal and cooking the impurities out of it. The bituminous coal of the Connellsville region made a superior coke because the production process left it honeycombed with pockets that gave more surface area for burning. This made for faster burning than could be achieved with the denser anthracite, and thus faster pig iron production. (pp. 51–52)

The production of western Pennsylvania coke fed Carnegie’s expansion of rail and structural steel, a vital step leading to the vertical integration of the U.S. steel industry.

Carnegie had two managerial obsessions. The first was cost minimization and product quality. He constantly worked to reduce his production costs below his competitors, and used the latest processes to create a superior product. The second was restricting partners’ salaries and dividends to use profits for capital investment. Carnegie, in contrast to competitors, used the closely-held partnership form of business organization. They were not required to disclose their internal business plans and performance metrics. Public firms published this information so Carnegie purchased shares to learn about his competitors. Carnegie was a shrewd judge of men, and business practices and trends. Many of his top managers had started as unskilled or semi-skilled labor, and rose through the ranks. One of his managers had five operating principles: employ young and ambitious men; mix nationalities in the workforce; use up-to-date machinery; encourage competition between plants; and reduce the workday from 12 to 8 hours to increase productivity.

His commercial enterprises also took advantage of protectionism and tariffs. One obvious rationale for protectionism - and the one mentioned favorably by Andrew Carnegie, Bostaph explains, was the “infant industry” argument. This was tantamount, with iron and steel production, to an “infancy” dating to 1789, a period of more than 100 years. “Basically,” he writes, “what happened in both the iron and railroad industries during this period was that government was used as a means for socializing costs while privatizing profits.” (p. 41) Tariffs on the supply side advantaged domestic iron and steel producers. One factor inspiring Carnegie’s decision to build a large mill was the Tariff Act of 1870. Bostaph explains, “Protected by that duty and producing rails on a large scale in a state of the art plant, they expected to take the domestic market away from the British, as well as from their American competitors.” (p. 44) Carnegie termed himself a “moderate” protectionist opposed to high tariffs and free trade. (p. 55) He was also a defense contractor, selling armor plate to the Navy (p. 83).

Carnegie’s commercial career reached its zenith in 1901 when he sold his steel firm for $304 million to the newly-created U.S. Steel (X), the first billion-dollar U.S. corporation.

But he was not an interventionist. In 1898, Carnegie argued against annexation of the Philippines, stating it would be costly. He offered to pay the U.S. government $20 million for the islands, the amount a treaty required that Spain be paid. Carnegie sought to buy the Filipinos their political independence but his offer was refused. He later established the Palace of Peace at the Hague (1903) and the Carnegie Endowment for International Peace (1910) “to hasten the abolition of international war.” Carnegie grew up a “violent young republican” (Carnegie, 1920, pp. 10-12) in a household whose members were “highly critical of the existing political and economic system.” (p. 12) After U.S. Steel’s creation, Carnegie spent nearly two decades at the end of his life giving his fortune away as well as acting as a vociferous advocate for world peace.

One issue worthy of further research is Carnegie’s understanding of the business cycle. This means examining his operations in the nine cycles that occurred between the Civil War’s end in 1865 and U.S. Steel’s founding in 1901, according to the NBER’s business cycle chronology. Carnegie appears to have flourished in them by refusing to overcapitalize his operations in the preceding expansions, while purchasing discounted assets in contractions. Bostaph touches on this issue by noting the Panic of 1873 was a financial disaster for some firms but not for Carnegie’s steel operation. “The partners had the cash for their subscriptions and building during a recession meant that materials, labor, and transportation costs were less than earlier years.” (p. 44) He notes that Carnegie’s drive to cut costs “made it possible not only to increase his profit margins in good times, but also to preserve the power to reduce prices when it was necessary to keep the orders coming in." To be able to do so was particularly important during recession years when Carnegie would cut prices to keep production up at low profit rates rather than lose sales, cut production, and lay off workers (p. 46, Nasaw, pp. 174–176). It’s worth noting that work on Carnegie’s first big steel mill began during an 18-month contraction (June 1869 to December 1870), and a decline in rail demand in 1883 led to the forced sale of the Homestead steel works to Carnegie at the value of the original investment during a 38-month contraction (March 1882 to May 1885). Carnegie’s competition fought to stay afloat in recessions while he expanded operations.

Carnegie’s entrepreneurial talents in developing new markets and technological innovation cannot be ignored, Bostaph writes, despite his support for protective tariffs and unscrupulous dealings with politicians. Readers interested in an economic examination of Andrew Carnegie’s commercial career will benefit from Bostaph’s work.

Mises Institute
2.01K Followers
The Mises Institute is the world’s largest, oldest, and most influential educational institution devoted to promoting Austrian economics, freedom, and peace in the tradition of classical liberalism. Since 1982, the Mises Institute has provided both scholars and laymen with resources to broaden their understanding of the economic school of thought known as Austrian economics. This school is most closely associated with our namesake, economist Ludwig von Mises.We are the worldwide epicenter of the Austrian movement. Through their research in the fields of economics, history, philosophy, and political theory, Mises’s students F.A. Hayek, Henry Hazlitt, Murray Rothbard, and others carried the Austrian School into the late twentieth century. Today, Mises Institute scholars and researchers continue the important work of the Austrian School.Austrian economics is a method of economic analysis, and is non-ideological. Nonetheless, the Austrian School has long been associated with libertarian and classical-liberal thought—promoting private property and freedom, while opposing war and aggression of all kinds. The Mises Institute continues to support research and education in this radical pro-freedom tradition of historians, philosophers, economists, and theorists such as Jean-Baptiste Say, Frédéric Bastiat, Richard Cobden, Herbert Spencer, Lysander Spooner, William Graham Sumner, Albert Jay Nock, Mises, Hayek, Hazlitt, Rothbard, and many others.