The growing divide between supply and demand in the lithium space continues. Pressure from the government side comes from US car manufacturers remaining under strict CAFÉ mandates—despite the current administration’s short-term and short-sided efforts to the contrary. California, the country’s largest car market, still holds its mandate to set emission standards which continue to be the strictest in the nation. China clearly wants to be a world leader in the production of electric cars and has gone so far as to project the end of the internal combustion engine while mandating strict medium-term goals for auto manufacturing efficiencies and climate control, including a cap on carbon emissions by 2030. The infamously polluted air of Beijing and other leading Chinese industrial cities continue to be one of the driving forces of a concerted government effort to promote alternative energy solutions—and electric cars in particular. The EU has also put in place strict rules regarding carbon dioxide emissions. France and Britain have publicly stated that consumers will not be able to buy a purely fossil-fueled car by 2040. World cities such as Paris, Athens, Mexico City and Madrid have gone on record with a possible ban on diesel fueled cars in their respective jurisdictions after 2025. We can expect the further tightening of the regulatory vise in 2018 and beyond.

On the industrial side, Tesla has brilliantly shaped investor expectations around electric cars as being the replacement of the internal combustion engine—long the driving force behind the company’s uber-nosebleed market valuation. More traditional automakers like Volvo and VW have set in place ambitious goals of introducing electric and plug-in hybrid cars in their respective showrooms about the world. GM has quietly introduced its plug-in Volt and all-electric Bolt models with growing market success.

All of this latent demand places enormous strain on supply side companies providing the all-important component piece of the puzzle--the power source and range requirement--that have become the holy grail to unlocking the potential of electric cars as a mainstream player in automobile markets worldwide. And that means the demand for lithium-ion battery pacts to power these vehicles have strong upside potential for the medium term and beyond. That trend has already begun (see Figure 1, above).

The problem with this outsized shift in demand for lithium power sources is the realization that the world’s current lithium suppliers have reserves that fall far short of demand side of these expectations. A broad reflection of this shortfall is clearly presented by the year’s progressive increase in the share price of Wealth Minerals (OTCQB:WMLLF) where a 10% price surge since the spring of 2016 (orange line, see Figure 1, above) has become much shorter in duration. Accordingly, the share price of Wealth Minerals is being pushed ever higher as current lithium supply constraints adjust to this quantum market move.

Wealth Minerals occupies a rather unique position in the current supply side juggernaut. There are two sources of lithium, one from brine and one from hard rock, with the world’s known supply largely split almost evenly between the two media. Brine production is by far the cheapest and most cost-effective means of extracting lithium. In August of 2016, the company executed an option agreement giving it the right to acquire 100% royalty-free interest in exploration concessions in the Salar de Atacama region, a vast, ancient salt bed or salar in northwestern Chile 2,300 meters (7,545 feet) above sea level. The Atacama Basin holds some of the world’s highest grade (over 1,800 parts per million) of brine lithium and currently produces about a third of current global supply. This gives Atacama production the lowest priced lithium in the world. Among the company’s Chilean holdings is its crown jewel asset of 45,000 hectares in the northern part of the Basin, a neighborhood that includes global mining giants BHP Billiton (BHP), Freeport-McMoRan (FCX), Sociedad Quimica y Minera de Chile (SQM) and state-owned Corporación de Fomento de la Producción (CORFO), the latter with whom Wealth Minerals is in direct talks in hopes of moving the consolidation process, as well as the asset production phase of the operation forward. 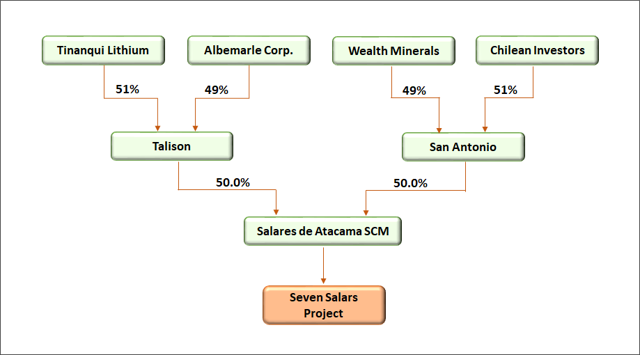 Another project due south of the Atacama Basin along the Chilean-Argentine border is the Seven Salares Project that joins Talison Lithium LTD, Albemarle (ALB), two Chilean groups and Wealth Minerals (OTCQB:WMLLF) in a joint ownership operation in lithium production. Talison, currently the world’s largest lithium producer, purchased the rights to the salares in 2010 and has conducted geophysical surveys and drilling tests in subsequent years. Drilling samples in the Salar de la Isla between 2010 and 2011 produced 68 samples with a range of 220 ppm to 1,080 ppm and average of 863 ppm of lithium content. The depth of the salares could exceed 200 meters or just over 656 feet. While Cypress Development (TSX: CYP) on the Toronto stock exchange, has recorded reading exceeding 3,000 ppm from its 1,300 acres in the Clayton Valley, Nevada, the average lithium range in the Nevada desert is between 100 and 300 ppm. Just across the border in neighboring Argentina, the average lithium content in the Olaroz salar is 690 ppm, in the Cauchari salar averages 584 ppm, the Los Angeles salar averages 451ppm, the Tres Q salar averages 714 ppm and the Sal de Vida salar has an average of 810 ppm. 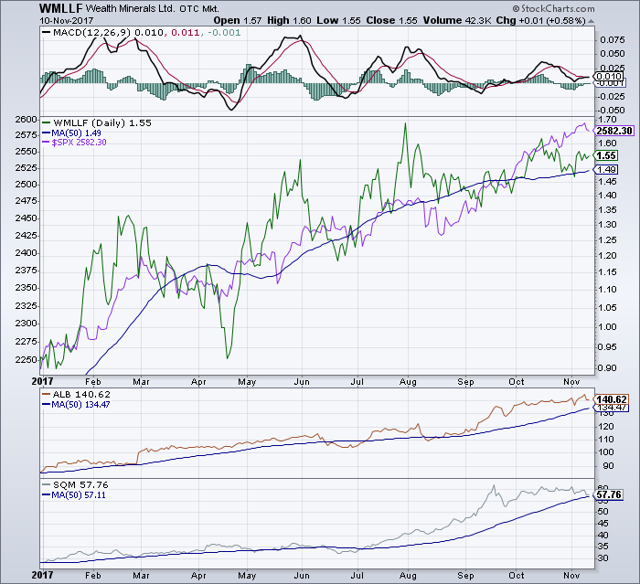 Through a variety of acquisitions dating from the spring of 2016, Wealth Minerals has amassed exploration and evaluation assets totaling $15.7 million (Canadian dollars) in an unaudited interim consolidated statement ending the 31st of May 2017. That total has almost doubled from its $8.6 million post through the end of November 2016. The company's cash balance has increased to $3.1 million, up about 3.5% over the same period. Net loss for the period comes to $1.90 million, down from the three months ending 31 May 2016 loss of $2.40 million. The basic and diluted loss per share follows the same pattern of (0.02)/share through the end of May 2017, down from (0.05)/share in the three months ending May 2016.

The company is authorized to issue an unlimited number of common voting shares, not too uncommon for the business of mining and exploration that involves a high degree of upfront risk with no guarantees on backend earnings. Currently, the company has issued 82.7 million common shares outstanding through the end of May 2017. That total is up from November's total of 72.62 million shares, an increase of about 14% for the period and up almost 49% YOY. The issuance of securities has, to date, been the company's principal source of financing. The reliance on stock issuance will continue into the future. This means the company will not only be issuing common stock to meet the expenses of its upcoming geophysical survey and drill tests of the Atacama salar, but also to meet the ongoing payment schedule for the purchase options already executed for the assets it currently controls over the course of the next 48 months.

In all likelihood, Wealth Minerals will not be the company developing the lithium assets it currently holds. The company strategy here is to position itself for the inevitable supply-side consolidation move at such time when the industrial demand side hits up against the reality of the current supply side deficit that constricts the actual flow of lithium to markets worldwide. The exact timing of the event is an unknown. That said, Wealth Minerals is poised to sell its assets to the highest industrial bidder, which is company's Plan A strategy.

Given the fact that Wealth Minerals has as of yet no geophysical survey or drill test data from any of its salar holdings, cash flow from ongoing operations remains an event in the undefined future. The lowest hanging fruit in the company's asset holdings is in the Salar de la Isla where Talison's geophysical surveys and drilling samples have already been performed and where the move to asset production is an end agreement with its assorted partners.

Yet it is precisely along this long and winding road to asset production where shareholder value in the company maximizes, where resource companies are granted a once-in-a-lifetime chance to lever their pricing power over the assets it controls. Wealth Minerals appears poised at the cusp of just such a market event. Perhaps counter-intuitively, it is on the front end of this levering process where investors should contemplate a move into the lithium space—a time when supply chains are not in place and, importantly, a time when the metal is not already priced out in long-term utility-like contracts between supplier and industrial user. Once such contracts are inked and the logistics of delivery are in place, the price of the commodity has already been set and the initial surge in price becomes part of the historical archives. Herein lies the beauty of Wealth Minerals' current strategic positioning. The company already has a prime seat at the table given the world class assets it currently holds. Much of the supply side is still dancing around the available chairs. The industrial side continues to post ambitious projections on almost a daily basis. And governments the world over continue to literally fall over themselves in promulgating the demise of the internal combustion engine. Yet here in the US, House Republicans have proposed the elimination of the $7,500 federal tax credit for the purchase of an electric car. Go figure.

The company plans to begin geophysical surveys and drilling tests in the Atacama Basin in Q1 and Q2 during the long Chilean summer months of January through June in the southern hemisphere, the company's Plan B. Market breakout appears poised for the company as investors await the data result from the work which will define both the next phase of the project and the growing market awareness of its share growth potential. The tarantella refrain is sounding out its opening phrase.

Disclosure: I am/we are long WMLLF, ALB, SQM. I wrote this article myself, and it expresses my own opinions. I am not receiving compensation for it (other than from Seeking Alpha). I have no business relationship with any company whose stock is mentioned in this article.