Recently, we've witnessed some hard selling in S&P 500 (SPY) component stocks, though you wouldn't have noticed if you hadn't seen this chart.

The Dark Index (DIX) measures buying and selling in dark pools across all 505 component stocks of the S&P 500. When it's high, investors are buying - when it's low, they're selling.

But if there are oh-so-many sellers, you may be wondering, then why haven't prices gone down yet? Two reasons:

We've riffed on this for a long time, so hopefully this is familiar to some of our readers already. But it's worth repeating. So here goes:

Dark pools are unique in that off-exchange buying and selling activity aren't always reflected in market prices right away. Being "dark" (i.e., invisible), the liquidity of a dark pool won't directly affect the price-discovery process. Rather, the effects diffuse through the market in their own time.

Which is why in one of our last articles, we were keen on Valeant Pharmaceuticals (VRX), which had attracted plenty of buying in dark pools, but whose price hadn't yet been affected.

Within three months of the article, the price had rallied a healthy 88% before ostensible selling began again in dark pools. After which price began to fall. (And now it's happening all over again, in case you care about VRX.)

This phenomenon, writ large, partly explains why the market takes time to turn. Investors don't want to affect prices, so they use dark pools to slowly offload shares, making the selling effectively invisible until we see the effects days, weeks, or months later.

So, yes, we think that's pretty interesting, and it goes a long way toward explaining why "buying" and "selling" aren't always synonymous with "rally" and "dip." But when it comes to the S&P 500, there's more to the story of why prices actually go up when it really looks like they shouldn't.

You already know that there are lots of long-only, "hold-forever" investors in the stock market. In fact, the bulk of investment money is perpetually committed to holding long positions, rain or shine (think mutual, index, and pension funds). The bulk of investment money is also interested in lower volatility of returns and "juicing" a portfolio when possible, because beating benchmarks is hard.

At the convergence of these interests is the "covered call," whereby a long investor sells call options against his long stock. This is something you might do if you're committed to holding a stock, but you don't think it's going to go up in the near future (and you wouldn't mind collecting some premium while you wait).

Essentially, it's a way to make your bullish positions more neutral, and if you look at the volume of options in the S&P 500, it's become more popular than ever.

Now here's where this gets crazy.

When an investor sells a covered call, he sells that call to a market-maker, who now owns a long call. Since covered calls are sold above the market, with less than a 50% chance of ending in-the-money (<50 delta), they are prone to lose value quickly when prices go down. I.e., as time passes, an option with less than a 50% chance of retaining value can lose value quickly. (Similarly, an option with >50 delta retains more value as time passes.)

This may not sound like a big deal to you, but if you had billions of dollars in long calls like market-makers do, you'd try to figure out how to not get steamrolled by the possibility of a price decline.

The first step is always to delta-hedge the options, whereby the market-maker short-sells a proportional amount of shares to the option's delta. E.g., if you owned one 20-delta call, you'd short 20 shares of the underlying to neutralize your directional risk.

But directional risk isn't the only risk here, because if your calls lose value, your losses actually start to accelerate. The gains from your hedge (the short shares), meanwhile, don't accelerate (shares have a linear payoff, not convex like a call option), and you slowly bleed money.

The only way to stay competitive in this scenario is to, as traders have always said, "let your winners run." This is accomplished by re-hedging call losses quickly and re-hedging call gains slowly.

The collective effect of this business practice is that option market-makers with a lot of calls on their books (everyone) will always buy dips a lot faster than they sell rallies. Visually, it ends up looking like this (circled): 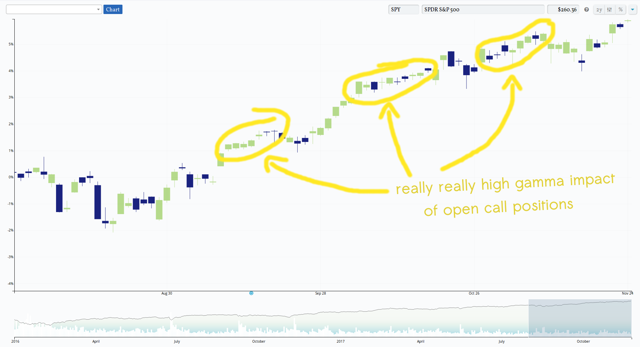 What makes this all especially strange is that the extremely low-volatility, high-return periods indicated above are precipitated by bearish (or at least "not-bullish") actions in the option market: call sales. And even if hundreds of millions of dollars of S&P 500 stocks are being net sold (again, see the Dark Index), the market is still being propped up by the effect of huge call sales.

Here's an example: Based on SPX options alone, on October 17th, $96.6 billion would have held the market up in the event of a one-point fall on the index. To put that in context, E-minis might trade $140 billion or more a day, and the SPY might trade $16 billion. And yet there was, meanwhile, nearly $100 billion in guaranteed buying power in the event of a tiny decline in price.

In other words, there was no way that October 17th was going to dip more than a few tenths of a percent. It wasn't even possible (take that, "Random Walk").

Granted, October 17th was a tad more extreme than most of recent history, but we measure this stuff on a daily basis, and our Gamma Exposure [GEX] metric shows us that these low-volatility, perpetual dip-buying days have become pretty normal thanks to this phenomenon. 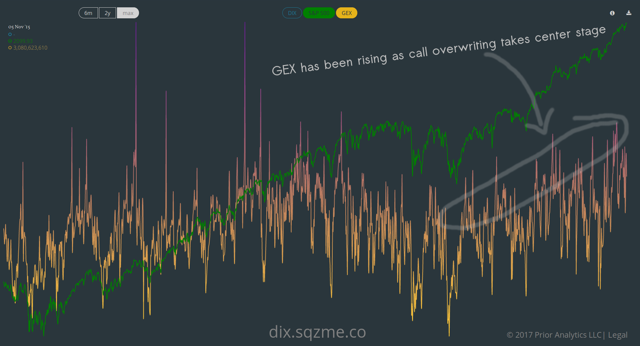 But then, if you've been watching the S&P 500 at all (or the VIX), you probably knew that already. (You just didn't know why.)

Here's the issue: People believe that the market digests and reflects real-time information on risk and reward. What they don't understand is that, on many days, you could plow a hundred billion dollars into the bid and the market wouldn't even flinch. The big effect is that buying and selling in the market has, in reality, become less and less visible over time.

This guarantees that the first big sellers in any call-heavy market will go completely unnoticed, and the market will take weeks or months to turn over and correct - regardless of how overpriced things might look at the time.

What we're suggesting here is that the first big sellers have arrived, and they've been selling shares slowly in dark pools. For the reasons enumerated above, the market just hasn't digested that yet.

Do with that information what you will.