Roku's (NASDAQ:ROKU) main business is providing free content by licensing it and profiting from the advertising revenue it generates. Simply put, Roku wants to bring the traditional TV model to the internet, an interesting endeavor indeed.

It is a great business, but very overpriced right now. Advertising is the only reliable source of revenue for Roku, the player is just how it got its foot in the door but is nothing for the long term.

Why the player is not worth considering seriously

Roku's revenue comes from 2 sources: hardware and advertising. When evaluating the stock, the earnings from the hardware business should be tossed aside for the following reasons.

Going against Google, Apple, and Amazon and surviving this far is quite an accomplishment. Roku has found the cracks in the sector and managed to make a niche for its devices. But tilting windmills is a dangerous endeavor, and rather than associating the success or failure of Roku as a company based on its hardware, I rather consider it as non-existent financially, as in the future, it might be too expensive for Roku to continue the fight or simply it might be more profitable to abandon this endeavor and instead put more time an effort partnering with more Smart TV producers to have its platform embedded in their TVs, as it recently did with Philips (PHIA).

My valuation of Roku comes with some basic hypothesis:

When analyzing Roku's financials, it is remarkable to see that many of the items have linear behaviors. Since Roku´s users come from the player and smart TV´s of small vendors, revenue is steadily growing, R&D and Sales and marketing are controlled as a percentage of revenue and cost of revenue should remain about the same percentage as it has been doing, giving about 75% gross profit margin. 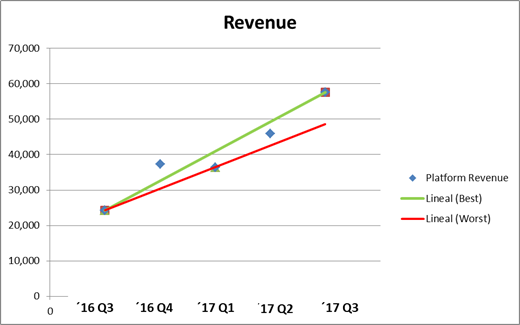 Considering that revenue divergence, with a profit margin of 75% and subtracting the linear behaviors of the R&D and S&A expenses we can have a basic linear model of the behavior range of Roku. The “mean” is my estimate of for Roku. 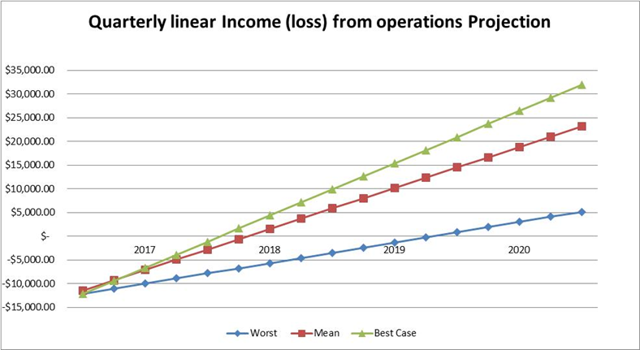 In any of the cases, by 2020 the company will be profitable and its valuation quite simple with the Lynch ratio. Peter Lynch´s method for growth valuation uses the ratio between the expected earnings growth and the P/E of the stock to determine its fair value. A stock that has a 1:1 ratio is a fairly priced. Considering that each of the lines has its own growth ratio it would be the fair value if it had the same P/E.

Roku has little debt and plenty of cash, some inventory but not worrisome amounts. Keeping all assets as recorded in the Q3 and divided between the more than 80 million shares, it comes around $2.62 per share....

At its worst, the stock will tank to barely double digits, and best case scenario, the price will jump about 70% in the next 3 years, my projection is that the stock will have a similar price in 2020 as it has today

On the revenue chart above, there is a little spike in platform revenue in Q4 of 2016. There is a clear seasonal factor for revenue since it is a quarter filled with holidays and kids on vacations, which increases the streaming needs of the family. For the long run, I don’t recommend counting the player business, but for guessing whether or not Roku will beat the Q4 forecast it is important to consider it.

The linear behavior puts the advertising gross profits between $40 million and $50 million, while last year, the player Gross Profit was $10 million. Considering that the linear model does not include seasonality I believe the probability that Roku beats Q4 earnings is high.

As I said in the beginning, going against Google, Amazon, and Apple is quite an accomplishment. I am impressed with Roku´s management, and I even like the business strategy; however, the company still faces many challenges and although there are many recent news to be cheerful about, the challenges in Roku´s horizon are considerable. As interesting as the business model is, and as much as I like the management, I rather wait to see how the story develops.

Many valuations put Netflix (NFLX) and Roku as competitors, but for similar reasons why I don't consider Amazon to be Netflix competitors, I believe Roku and Netflix are not overlapping much.

Additional disclosure: If there is anything in this article you agree or disagree with or would like me to expand further I would sincerely appreciate you leaving a comment and I will address it as soon as possible. I am not long on Roku, nor I plan to initiate a position soon.