With all the focus on the unemployment rate, and therefore wages, Economists have been given the luxury (of sorts) of not having to answer for a larger, more basic incongruity. At 4.1% unemployment, supposedly, competition for workers given the scarcity of them who are unattached (low or no slack) should be driving up pay rates. Wages, however, aren't the only measure of possible demand for work.

There are, obviously, two components in pay - the rate per unit as well as the number of units (usually condensed into a per hour basis for economic statistics). If there was indeed heavy competition for labor due to a rolling economy, then employers would be raising their wage offers while at the very least holding total hours steady, if not increasing them, too. The result is not just rising pay rates but overall national income; pay per unit goes up as does the number of units.

Going back to 2015, however, we only find the opposite. Income growth overall has decelerated to the point of nearly a standstill. To write that this is unusual would be an understatement; to do so at a 4.1% unemployment rate can only be a category error. Enough time has now passed since that last economic downturn that "transitory" factors can't possibly be to blame. It totally dismisses the mainstream wage/inflation story even before it begins. 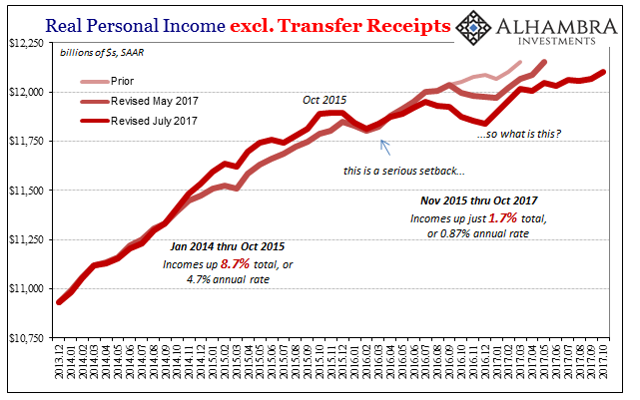 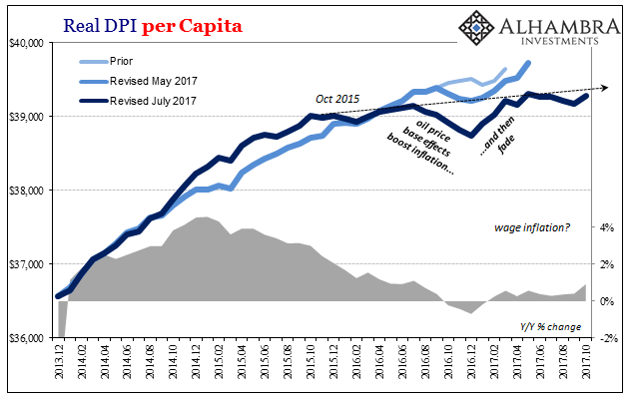 The BEA with its latest update for Personal Income and Personal Spending just revised lower national income growth for much of this year. Already insufficient to suggest the hint of full employment, income growth is that much more missing from what should be a uniform, obvious economic acceleration toward real growth. An economy producing at full employment would be one steadily using more labor at greater cost, not less marginal labor at steady to slightly rising unit cost. 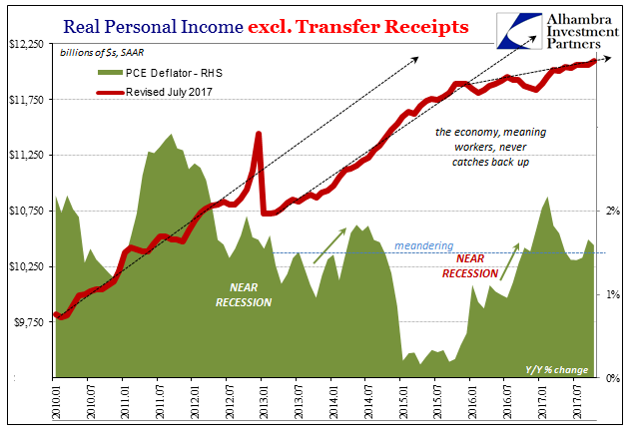 The focus on wages as a foundation for expectations of future inflation is therefore entirely misplaced (and I'm sure in some cases that's intentional). Employers aren't paying more because they very clearly aren't demanding more labor. GDP might have been 3% or better for the second straight quarter, but that really is a measure of weakness, not strength, given the uneven nature of economic growth so far (in 2014, the peak was two quarters of nearly 5% GDP). The slowdown in the labor market matches all too well that in the overall economy, a shift easily observed in these national income accounts. 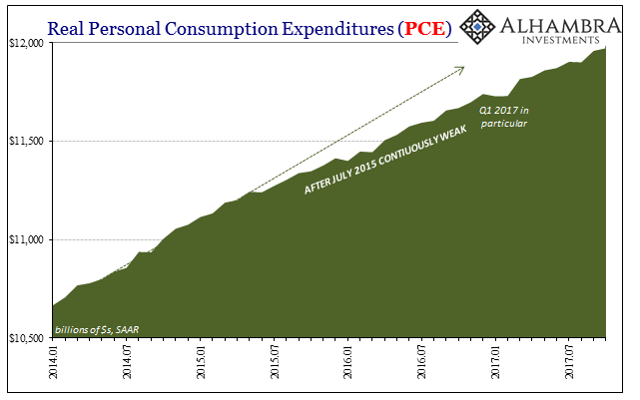 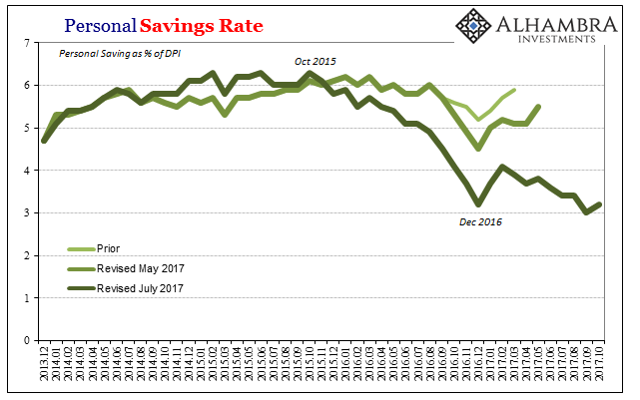 Without income growth, there isn't much for spending growth and therefore economic growth. Consumers, as workers experiencing this labor slowdown, are further and further stretched to the limits as national income slows more than spending. The difference is the savings rate, which this year has fallen to a low last seen during the housing bubble (a revised 3% in September), only this time as a measure of (income) constraint rather than (debt) excess.

There is nothing here to suggest the economy is picking up, and that's a big problem because this is exactly where that positive change would show up. Rather, what is indicated especially by income is again the opposite of what was expected, and predicted. As noted Wednesday, the Federal Reserve is not data dependent but future data dependent. They are "raising rates" not on what's really going on right now, but what they think will happen next year based on rationalizations long since disproved.

The yield curve collapse is merely the bond market trying to get the Fed and the media to pay attention to national income and actual, total labor market utilization rather than focus wrongly on the more pleasing unemployment rate and what it could mean if it wasn't unsuited to the current situation. 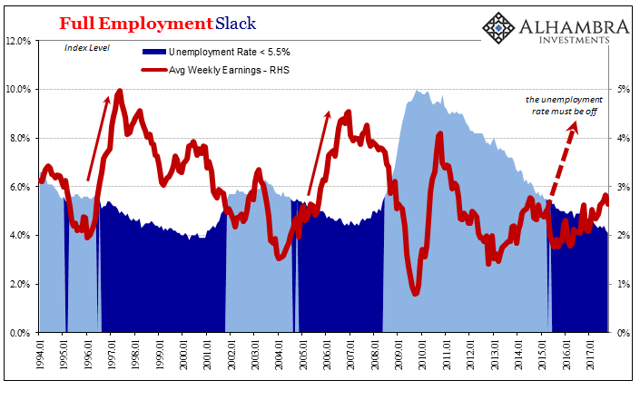 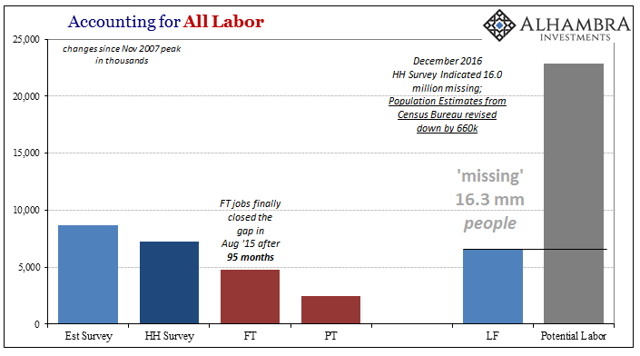 Jeffrey Snider
4.65K Followers
As Head of Global Investment Research for Alhambra Investment Partners, Jeff spearheads the investment research efforts while providing close contact to Alhambra’s client base. Jeff joined Atlantic Capital Management, Inc., in Buffalo, NY, as an intern while completing studies at Canisius College. After graduating in 1996 with a Bachelor’s degree in Finance, Jeff took over the operations of that firm while adding to the portfolio management and stock research process. In 2000, Jeff moved to West Palm Beach to join Tom Nolan with Atlantic Capital Management of Florida, Inc. During the early part of the 2000′s he began to develop the research capability that ACM is known for. As part of the portfolio management team, Jeff was an integral part in growing ACM and building the comprehensive research/management services, and then turning that investment research into outstanding investment performance. As part of that research effort, Jeff authored and published numerous in-depth investment reports that ran contrary to established opinion. In the nearly year and a half run-up to the panic in 2008, Jeff analyzed and reported on the deteriorating state of the economy and markets. In early 2009, while conventional wisdom focused on near-perpetual gloom, his next series of reports provided insight into the formative ending process of the economic contraction and a comprehensive review of factors that were leading to the market’s resurrection. In 2012, after the merger between ACM and Alhambra Investment Partners, Jeff came on board Alhambra as Head of Global Investment Research. Currently, Jeff is published nationally at RealClearMarkets, ZeroHedge, Minyanville and Yahoo!Finance. Jeff holds a FINRA Series 65 Investment Advisor License.
Follow
7 Comments