And now? Same story, even bigger numbers - but with a decidedly more skeptical treatment in the media:

(Wall Street Journal) - For anyone who has gotten stuck on a mountain road behind a massive recreational vehicle, get used to it, there are a lot more on the highway.

Recreational vehicles, ranging from bus-sized motor homes to retro trailers, have been a boom-and-bust industry since they first became popular in the early 1970s. Now a wave of retiring baby boomers and a surprisingly young new fan base have sent U.S. unit sales above their housing boom peak. Shares of the two leading manufacturers of RVs, Thor Industries (THO) and smaller Winnebago Industries (WGO) each hit records last week.

The fundamentals-fuel prices, interest rates, disposable income and demographics-all look solid. That has the Recreation Vehicle Industry Association projecting a further jump this year and next. Despite that, delighted investors might want to unhitch themselves from these stocks. When things go badly for the economy, they go very badly for RV makers.

Shares of one-time industry leader Winnebago Industries plunged by 94% from peak to trough in the first 1970s energy crisis and by 78% in the second one. A lack of easy credit and consumer confidence can be just as devastating. Shares fell 92% between their housing boom peak and housing bust trough, while wholesale RV shipments fell by two-thirds. 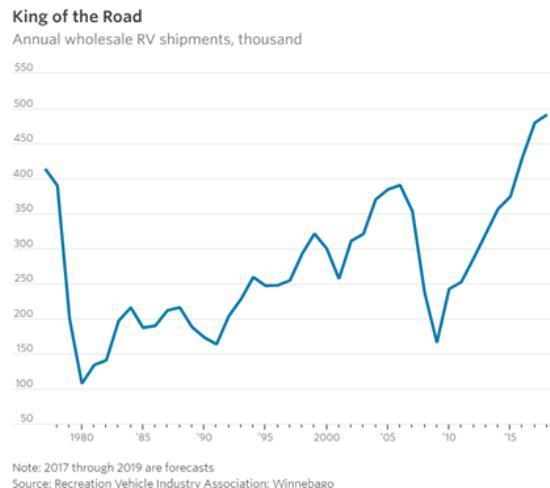 While an energy shock or sharp economic downturn don't loom on the immediate horizon, the industry isn't quite as robust as unit sales figures suggest. Younger "glampers" increasingly are opting for cheaper, towable vehicles, not huge, motorized ones. Leading RV retailer Camping World Holdings reported a 14.5% increase in same-store new vehicle sales in its third quarter, compared with a year earlier, even as the average price of new vehicles sold fell by 1.6% because of the shift to cheaper offerings.

Given the industry's sharp cyclicality, RV makers really should trade more like auto manufacturers, yet the publicly traded industry leaders - No. 2 by revenue Forest River, is a subsidiary of Warren Buffett's Berkshire Hathaway - have an average forward price-to-earnings ratio of 17.4 times, almost 2½ times the average of seven auto companies, according to FactSet. The leading dealership, Camping World Holdings (CWH), commands a 40% premium to a basket of auto dealers, but that seems less egregious given the fat margins it earns from services and used RV sales, compared with new vehicles.
For the manufacturers, though, it is about time for a rest stop.

Here again, the chart shows a spike beyond previous bubble highs which points to another crash. So add this indicator to trailing 12-month P/E, cyclically adjusted P/E, asset prices to GDP, and about a dozen other historically-reliable valuation measures that are now screaming "get out!"

Either this time is so different as to be unrecognizable or something big and bad this way comes. "Big and bad" for people who own stocks, that is. For long-suffering shorts, it looks like a return to the happy days of 2008.

John Rubino
2.73K Followers
John Rubino manages the financial website DollarCollapse.com. He is the co-author, with GoldMoney’s James Turk, of The Money Bubble (DollarCollapse Press, 2014) and The Collapse of the Dollar and How to Profit From It (Doubleday, 2007), and author of Clean Money: Picking Winners in the Green-Tech Boom (Wiley, 2008), How to Profit from the Coming Real Estate Bust (Rodale, 2003) and Main Street, Not Wall Street (Morrow, 1998). After earning a Finance MBA from New York University, he spent the 1980s on Wall Street, as a money market trader, equity analyst and junk bond analyst. During the 1990s he was a featured columnist with TheStreet.com and a frequent contributor to Individual Investor, Online Investor, and Consumers Digest, among many other publications. He currently writes for CFA Magazine.