With the volatility to end the week last week, all eyes are going to be on the market in the upcoming week. We wanted to take a moment and discuss subsequent news events as well as what we think it will mean if the market moves either higher or lower as we begin the first full trading week in December.

Much has developed since the close of the last trading week, including a major journalistic retraction in the story that cost the Dow 350 points on Friday. In addition, the Senate finally passed their tax bill that has been at the center of attention for the financial community ever since Trump took office more than a year ago.

Perhaps the most stunning development over the weekend was the admission by ABC News that it had incorrectly delivered a market moving story on Friday. It was originally reported by ABC News's Brian Ross that Michael Flynn was prepared to testify that Donald Trump asked him to contact the Russians while he was a candidate. ABC News retracted the most crucial part of the story and issued a correction this weekend, stating that this contact was made only after Trump had won the election. Politico wrote this weekend,

The initial report, which aired during ABC News' “Special Report” around 11 a.m. on Friday, cited a source claiming that a close associate of Flynn was prepared to testify that Trump "directed him to make contact with the Russians" during the course of the 2016 presidential race.

Around 6:30 p.m. ABC News’ Brian Ross issued an on-air “clarification” that their source had explained that it was only after the election that “President-elect Trump asked [Flynn] to contact Russia on issues including working together to fight ISIS.”

ABC News added that the extent of campaign communications between Trump and Flynn on the matter, according to the source, was limited to “Trump asking him during the campaign to find ways to repair relations with Russia and other world hot spots.”

This news, as it was first reported, is what kept the market mired on Friday despite the fact that the Senate finally was claimed to have had the votes to pass the long-awaited tax bill. Although the Dow Jones industrial average finished about 300 points higher than its lowest point of the day on Friday, it’s still finished the day in the red. It was a volatile session, 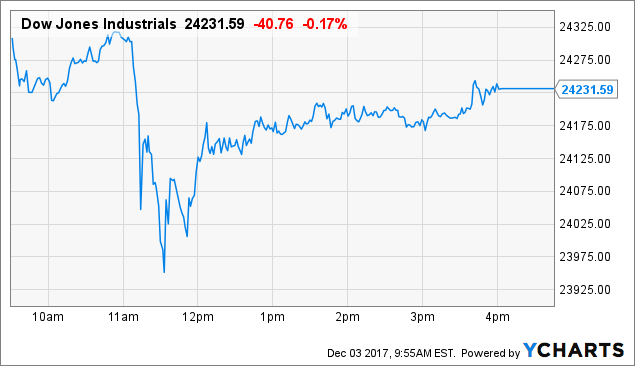 The U.S. Senate voted just before 2 a.m. ET Saturday to pass a sweeping tax overhaul worth roughly $1.4 trillion, putting the Trump White House a big step closer to its first major legislative victory – and many Americans closer to a tax cut.

The vote was 51-49, with Republican Bob Corker of Tennessee the only member of the GOP to side with the Democrats in opposition.

We wanted to take a quick look at what could transpire this week as a result of the dynamic news landscape and what it may mean for the market.

The most obvious guess would be that the market is definitely going to rally this week, not only on the tax bill getting done, but more importantly the news of ABC’s correction. While it is of course still very relevant that Flynn is going to testify and appears to be cooperating, the most crucial part of the story on Friday which looked like a slamdunk for collusion apparently doesn’t hold water at all.

If the market rallies next week, it could very well be a sign that nothing has derailed current bullish sentiment and that things may very well return to “normal“ as they were prior to Friday’s news being disseminated. Everybody has expected this tax bill to pass and the market didn’t get any new surprises on that front. The lowering of corporate taxes is going to have a profound impact on the bottom line of many public companies and it has been estimated that it will add between 10% and 20% to earnings going forward. In turn, and in conjunction with the market still slowly expanding its multiple, this could set the tone for a 2018 that may very well see the bulls in charge for the upcoming new year yet again.

But not everybody is certain that the market is going to rally next week. In fact, even financial media has stepped in with theories about why the market could see some unease heading into the new week. First off, the market has been tacking on gains in anticipation of this tax bill getting passed for the last year. Here’s a chart of what the Dow Jones has done since Trump has become president and since tax reform has been talked about. 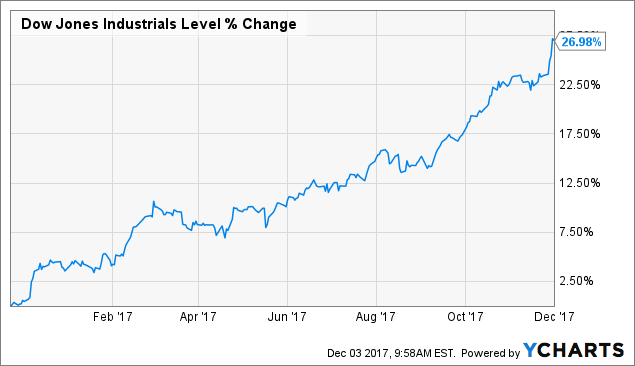 One could very easily argue that this appreciation takes into account any and all benefits from tax reform already, and then some. There is a case to be made that passing tax reform could actually be a “sell the news“ event and that equities could actually retreat in the upcoming week now that the bill has finally been passed. In this event, this would surely mark a sentiment shift and could be foreshadowing to a upcoming year that either puts the bears in charge or at least evens out the playing field between bulls and bears and makes this a stock picker's market.

On top of that, while the most crucial part of the ABC News story has been proven to be incorrect, there are key parts of the story that are still meaningful. The fact that Michael Flynn is now working with the special counsel on his investigation and that he is likely to have pled down to charges of lying in exchange for his cooperation is still a meaningful event.

While the impact of a potential Trump impeachment, which would be the worst case scenario stemming from this news, is debatable, this still could introduce an element of volatility in the market that the market was not expecting.

However, we think several financial pundits had it right on Friday when they stated that removing Trump and putting Pence in office wouldn’t really make too much of a difference in terms of the regulations and policies that have cause the market to rally since his election anyways. Some analysts even predicted that an impeachment would send the market higher.

This week is going to be a crucial one in terms of helping establish sentiment heading into the new year. Right now, stocks are still in a very bullish looking uptrend, with all retail, not just online, leading the charge into the holiday season as we predicted would happen in an article just days ago. This week will be crucial as a barometer for what sentiment will look like heading into the new year, now that we have two large pieces of news under our belt. With the tax bill passed and Mueller’s probe pushing forward, the market is finally going to have a full week of trading this week to let us know what its reaction is to the latest news landscape.

The last month of the year is an important time to keep an eye on the market.

While we usually do get a rally, spurred by holiday spending and just general feelings of euphoria, there is also tax loss selling and rebalancing of portfolios that will help us begin to construct a narrative for what the upcoming year is going to look like. Already, we have seen sector rotation over the last week out of technology and into industrials, a move that we believe has been catalyzed by the exact type of rebalancing that we are talking about. 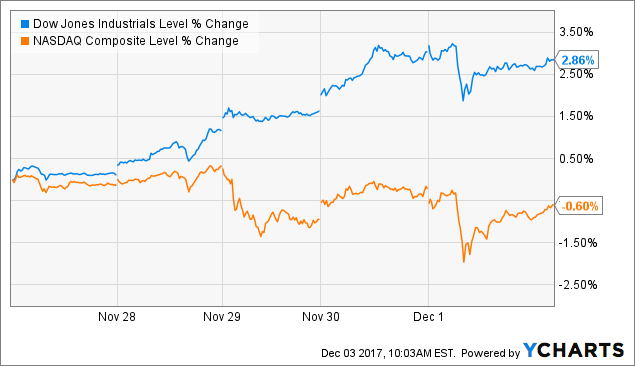 The chart above shows how the NASDAQ has performed versus the industrials over the last week of trading.

We expect that in addition to rebalancing of portfolios, that a rebalancing of sentiment will also happen. Traders have had the weekend to digest the latest news and will be coming to the table this week with plans about how they are going to wrap up the year and what their strategies are going to be heading into 2018. We think this week's trading could be extremely telling and we will watch it for clues as to how the market is going to perform in the coming year.