When one makes a deep value investment, the thesis usually pretty much amounts to “this company is so cheap, very little has to go right for it to work out.” In summary, that is pretty much my thesis as to why Ensco (ESV) is a good investment opportunity at current levels. In looking at deep value opportunities, though, because these are usually junky, challenged companies, one question that has to be asked is whether the company is in a viable or a dying industry. In this article, I explore the logical space of alternatives concerning the viability of the offshore oil drilling industry. I show that the offshore industry is in fact not a dying industry, and that even in a protracted recovery, the big five drillers (i.e., ESV, Transocean (RIG), Rowan Companies (RDC), Diamond Offshore Drilling (DO), Noble Corporation (NE)) look to be attractive investment opportunities. This article should be read in conjunction with (1) my recent articles that detail specific valuation scenarios for Ensco (Ensco: Worst-Case Valuation, Ensco: Base- and Best-Case Valuations), and (2) upcoming articles that will look at the comparatively attractive features of Ensco vs. the other big-five drillers as well the risks related to an investment in Ensco.

The first branch of the logical tree to consider is the logical fact that the offshore oil drilling industry will either recover or it will not. Let’s first consider the supposition that the offshore industry will not recover. The main gist of the argument here involves a few factors. First, it is argued that oil from onshore sources – with shale being the marginal difference maker – will be sufficient to respond to global demand. This argument, though, falls flat on its face when one takes note of a few important facts about the place of offshore oil in the global supply chain. According to the EIA, offshore oil accounts for approximately 30% of the global supply. 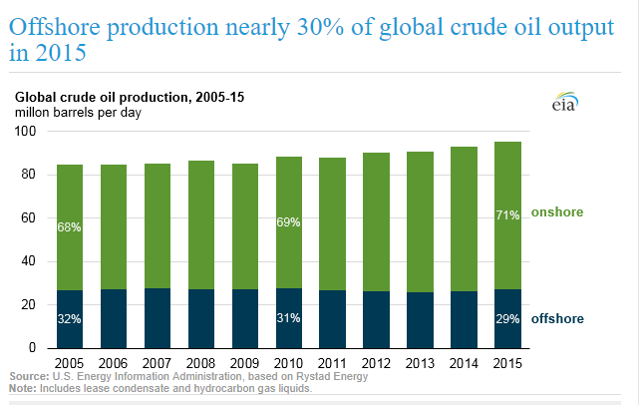 The supposition that shale can just “take over” the role that offshore oil has played in the global supply chain is manifestly ridiculous. As can be seen, offshore oil’s role in global supply has not materially changed since the onset of the shale boom; that is, that 30% number has stayed pretty consistent over the last decade. But if shale were going to supplant offshore oil, we should expect to have already seen material change in their relative positions in global supply and we should expect to continue to see such material change into the future. As of yet, though, there is no evidence that this has occurred, nor is there sufficient evidence to believe that it will occur. Additionally, we have to remember that oil production causes depletion of oil fields. Throughout the global production space, there has been substantial lack of investment in new projects reaching final investment decision (FID) as a result of the downturn in oil prices. 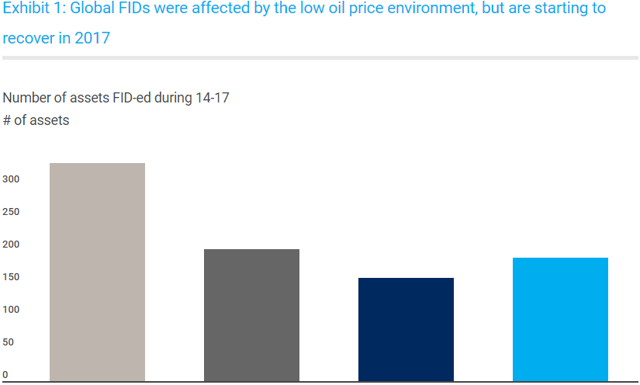 Deepwater projects in particular have suffered from lack of investment over this period. The notion that shale will be sufficient to fill the gap resulting from lack of reinvestment, again, is without merit. Such a “filling of the gap” by shale, again, would entail that offshore’s share of the global supply would materially change, something, as was just said, there has been little evidence of. So, while shale is obviously an important new factor in understanding global supply dynamics, the supposition that it will replace offshore is simply hyperbolic naïve extrapolation of qualitative - not quantitative - recent developments into the future.

The second factor that is often pointed to by those who suggest offshore oil is a dying industry is the advent of alternative energy sources. In particular, because oil is primarily used in transportation, electric vehicles are cited as the harbinger of death to the oil industry broadly, and the higher cost sources of oil like offshore particularly. This however, is unwarranted. As any casual observer of auto companies’ stocks knows, the absurdity of Tesla’s valuation in the stock market borders on hilarious when one considers its market share in terms of number of vehicles sold relative to entrenched legacy producers. This reflects the larger point that electric vehicles’ share of the market is incredibly small at this point. Latest estimates are that electric vehicles account for approximately 2 million vehicles on the road worldwide. Worldwide estimates are that there are well over 1 billion cars on the world’s roads, thus making electric vehicles an infinitesimally small proportion. As with the previous case of shale oil, we seem to have a case here of prognosticators naively projecting some qualitative fact (here, that electric cars are actually being seen by some consumers as viable alternatives to cars with internal combustion engines) into the future. Those future projections are helped by the fact that, at these incipient stages, any wild projections can be made to seem plausible. The problem is, though, that for a reasonable investment time frame (e.g., 5 years), there is not yet sufficient reason to think electric vehicles will meaningfully supplant vehicles with internal combustion engines. What’s more, when one considers other alternative energy sources like wind and solar, while there is no doubt these will continue to play more important roles in worldwide energy supply, the problem of the energy output per unit of these sources as compared to fossil fuels has not been cracked as of yet. And there is no reason to believe currently that this problem will be meaningfully solved during a normal investment timeframe like 3-5 years.

The third factor that is often cited by those suggesting offshore oil will not recover is the chronic oversupply of rigs in the industry. The argument goes that there are just too many rigs around, that there is no way drillers will ever be able to command previous peak day-rates ever again and that as a result this industry can’t survive. As with the previous two cases, this is merely an example of making the classic fallacy of naively extrapolating the present indefinitely into the future. Such folks argue that these rigs can be “mothballed” and set to wait out any lull in activity, or that something like debt covenants prevent drillers from scrapping their rigs. Yes, while it’s always easier to buy the puppy (i.e., building a new rig and, thus, increasing supply) as opposed to drowning it in the bathtub later (i.e., scrapping older, less competitive rigs) as Professor Bruce Greenwald says, it, nevertheless, does occur. This is a cyclical industry. We’re in the middle of the down part of the cycle. This is what it looks and feels like. Rigs are being scrapped. For illustration, these are the numbers per Ensco’s latest investor presentation: 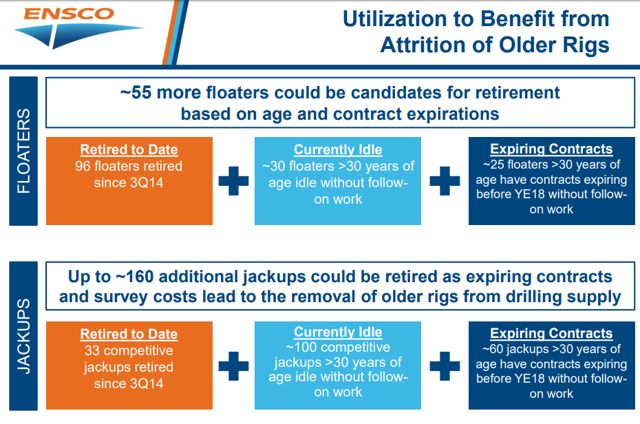 So while the destruction of supply isn’t immediate and some drillers have a greater ability to wait things out than others (due, for example, to recently having cleaned up their balance sheets as a result of going through restructuring) and some drillers can have an easier time scrapping some of their rigs than others due to contractual agreements, etc., we are seeing scrapping, nevertheless. And there is every reason to think this scrapping will occur into the future. This is how shipping industries like this one work. They overbuild during a boom cycle never imagining it could end, ironically bringing about its end through oversupply. They then rectify the oversupply problem during cyclical downturns, and the cycle repeats. Why should we as investors make the almost-in-every-case erroneous judgment that “this time is different”?

So, to sum up, the contention that the offshore oil industry is a dying industry seems to simply be manifestly false. If the original proposition that was under consideration here was “the offshore industry will either recover or it will not,” we now see that there is sufficient reason to believe that a recovery is the much more likely scenario. The question then is what sort of form that recovery will take.

Supposition 2: The Offshore Industry will Recover

Simply put, a recovery in the offshore oil drilling industry will take one of two forms. It will either come quickly or it will be protracted. The case of a quick recovery will obviously be a boon to the stock prices of the offshore drillers, so I will not consider that case here. Instead, I will focus on the case of a protracted recovery.

I will take it as a given that a recovery is to be defined as returning to peak levels of rig utilization and peak day-rates. The question is how the industry will return to those levels. As I’ve discussed in my previous articles, the offshore oil drillers fundamentally face a problem of supply and demand: too many rigs, not enough demand for those rigs. The demand side of the equation is most likely to be rectified (with a return to peak utilization and day-rates) as a result of higher oil prices and/or a need on the part of big oil companies to replenish their offshore investments. Such a rectification of the supply/demand imbalance will most likely be a factor of some degree of significance (to what degree, I don’t know) in the actual recovery of the offshore oil industry; however, such a rectification entails an easier recovery cycle for offshore oil drillers because it specifically does not entail the endurance of any pain on their part. (I look at this sort of a recovery in my article Ensco: Base- and Best-Case Valuations.) The pain for offshore drillers will come from a supply-side rectification; that is, drillers marking down and scrapping their rigs. So, to determine whether a driller can outlast a protracted recovery, one has to stress test it relative to what one deems to be the worst-case scenario. This is precisely what I do for Ensco in my article Ensco: Worst-Case Valuation. In that article, I show that even in a worst-case scenario of a 50% write down of their fleet, Ensco’s stock price at current levels presents an attractive investment. As I say in that article, I believe similar analyses can be done for the other of the big five drillers (i.e., RIG, NE, RDC, DO). Thus, even in the most protracted recovery scenario imaginable, offshore drillers generally, and Ensco in particular, look to be attractive investment candidates.

Rational Techne
282 Followers
I have been managing my own portfolio for about three years now. I focus mainly on value opportunities in the small and micro-cap space, although I will survey the entire market landscape, with the result that I've actually found some opportunities in the mid-cap space recently, contrary to my general inclinations.  A big component of my investing philosophy is to try to have my errors be largely skewed towards errors of omission rather than errors of commission, as the former are much less expensive than the latter.  As such, my writing has been and, I expect, will be much more about opportunities I pass on rather than investments I make. (I am primarily on the hunt for opportunities I'd be willing to make a significant, concentrated investment in - e.g., ~10% of my portfolio.)  I don't claim to be an expert on most things, so when I go wrong, I will be looking forward to an education from the smart readers and participants of the SeekingAlpha community.  Happy investing!
Follow

Disclosure: I am/we are long ESV. I wrote this article myself, and it expresses my own opinions. I am not receiving compensation for it (other than from Seeking Alpha). I have no business relationship with any company whose stock is mentioned in this article.