Central bankers keep lamenting the fact that record-low interest rates and record-high currency creation haven't generated enough inflation (because remember, for these guys inflation is a good thing rather than a dangerous disease).

To which the sound money community keeps responding, "You're looking in the wrong place! Include the prices of stocks, bonds and real estate in your models and you'll see that inflation is high and rising."

Well, it appears that someone at the Fed has finally decided to see what would happen if the CPI included those assets. And surprise! the result is inflation of 3%, or half again as high as the Fed's target rate.

(Bloomberg) - More than 20 years ago, former Fed Chairman Alan Greenspan asked an important question "what prices are important for the conduct of monetary policy?" The query was directly related to asset prices and whether their stability was essential for economic stability and good performance. No one has ever offered a coherent answer even though the recessions of 2001 and 2008-2009 were primarily due to a sharp correction in asset prices. 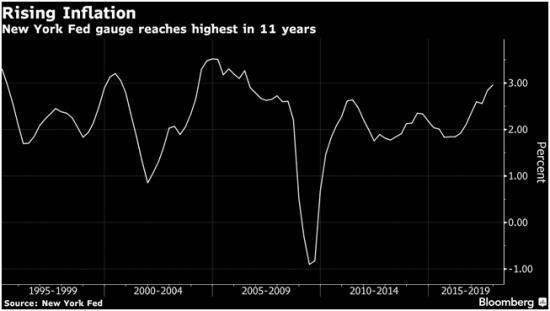 The UIG carries three important messages to policy makers: the obsessive fears of economy-wide inflation being too low is misguided; monetary stimulus in recent years was not needed; and, the path to normalizing official rates is too slow and the intended level is too low.

Harvard University professor Martin Feldstein stated in a recent Wall Street Journal commentary that "The combination of overpriced real estate and equities has left financial sector fragile and has put the entire economy at risk." If policy makers do not heed his advice odds of another boom and bust asset cycle will be high - and this time they will not have the defense mechanisms they had after the equity and housing bubbles burst.

To summarize, a true measure of inflation - one that is highly correlated with the business cycle - is not only above the Fed's target, but accelerating.

Note on the above chart that both times this happened in the past, a recession and bear market followed shortly.

The really frustrating part of this story is that had central banks viewed stocks, bonds and real estate as part of the "cost of living" all along, the past three decades' booms and busts might have been avoided because monetary policy would have tightened several years earlier, moderating each cycle's volatility.

But it's too late to moderate anything this time around. Asset prices have been allowed to soar to levels that put huge air pockets under them in the next downturn. Here's a chart that illustrates both the repeating nature of today's bubble and its immensity.

In other words, it is different this time - it's much worse.

John Rubino
2.73K Followers
John Rubino manages the financial website DollarCollapse.com. He is the co-author, with GoldMoney’s James Turk, of The Money Bubble (DollarCollapse Press, 2014) and The Collapse of the Dollar and How to Profit From It (Doubleday, 2007), and author of Clean Money: Picking Winners in the Green-Tech Boom (Wiley, 2008), How to Profit from the Coming Real Estate Bust (Rodale, 2003) and Main Street, Not Wall Street (Morrow, 1998). After earning a Finance MBA from New York University, he spent the 1980s on Wall Street, as a money market trader, equity analyst and junk bond analyst. During the 1990s he was a featured columnist with TheStreet.com and a frequent contributor to Individual Investor, Online Investor, and Consumers Digest, among many other publications. He currently writes for CFA Magazine.
Follow
7 Comments