Now Is The Time To Invest In Residential REITs 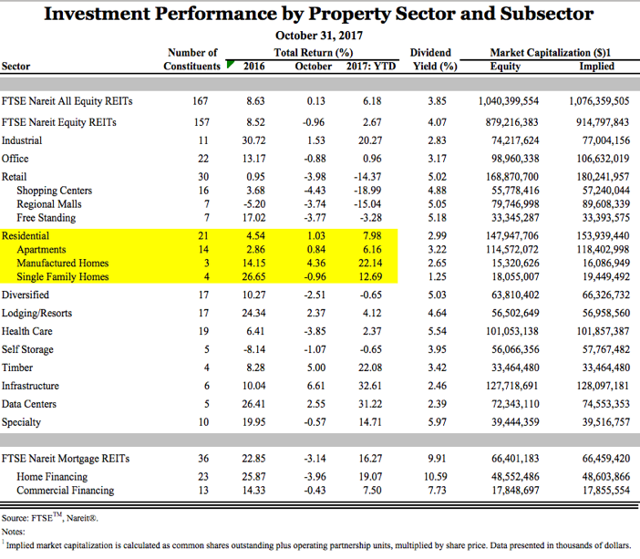 Residential REITs will continue to perform well as demand for rentals continues to rise given current market conditions. One catalyst for demand includes rising interest rates. The Federal Reserve Board has recently begun to reverse its quantitative easing policy, which was established in the wake of the 2008 financial crisis. Additionally, the Fed is expected to raise rates by a quarter-point at the December meeting. The Fed has been tightening fiscal policy and looking to raise the federal funds rate. Janet Yellen, the Chairwoman of the Fed, maintains an optimistic view of economic growth. As such, further rate hikes should follow in the coming months.

All market indicators of economic growth remain positive. Job growth is strong; the unemployment rate remains historically low at 4.4% (see Exhbit2). Consumer Spending in the United States increased to $11,922 Billion in the third quarter of 2017 from $11,853 Billion in the second quarter of 2017 (See Exhibit 3). More recently, U.S. retails reported record-breaking Black Friday sales of $7.9 Billion, representing a 17.9% increase from last year. Further, Cyber Monday sales are expected to bring in an additional $6.6 Billion in sales. In short, the economy is performing well, and the Fed is signaling for further rate hikes.

Another catalyst for rental demand included the new House-approved tax bill, which will limit the desirability of buying a home. Under the GOP tax bill, the ability to fully deduct interest expense from home mortgages would be eliminated. The bill suggests the maximum mortgage interest deduction would be $500,000 for mortgages, which is significantly lower than the current $1 million amount. While individuals and couples would be able to take a larger standard deduction, most itemized deductions would go away. The result would be that homeownership would look less attractive compared to how it looks under the current tax code. Another quality of the tax plan that would decrease the desirability of home ownership is the elimination of the moving expenses deduction, which would disappear in 2018 for all non-military individuals. Moreover, state and local tax deductions would be cut, which would increase the cost of living for many Americans, possibility limiting their ability to afford a downpayment and monthly mortgages payments on a house. Homeownership rates have continued to decline since the financial crisis, and this trend is likely to continue.

Yet another catalyst for rental demand includes the lack of housing supply. There are less than 4 months of housing supply available right now. Such low levels of supply are unusually low, given historical trends. (See Exhibit 6). As supply wanes, prices continue to rise (See Exhibit 7). Individuals will look to rent as the price of owning a home continues to increase. 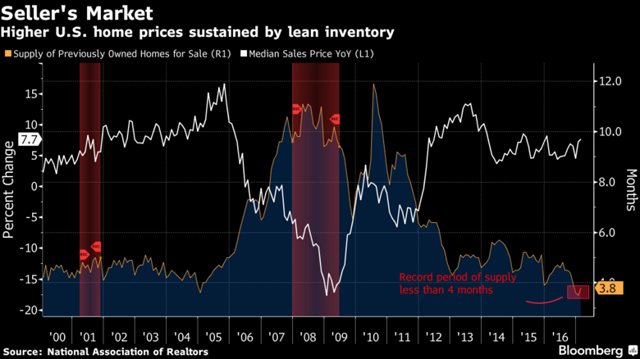 Time to Invest in Residential REITs

With favorable supply and demand metrics expected to continue, residential REITs are poised for further growth into 2018. Exposure to such REITs will allow investors to capture above-average returns.