The FOMC meeting next week is anticipated to end with a rate hike. Indeed, this is for all intents and purposes already a done deal. The employment report won’t change it. But the employment report could either add or subtract to FOMC concerns that the pace of activity remains sufficient to push the economy toward overheating sooner than later. The consensus forecast reasonably expects an outcome that leans toward the former, with job gains well above that necessary to hold the unemployment rate constant. That outcome would leave the Fed committed to their inflation forecast and hence inclined to maintain their projected policy path.

The consensus forecast expects a nonfarm payroll gain of 190k in a range of 153k to 250k. This strikes me as a reasonable expectation consistent with my forecast: 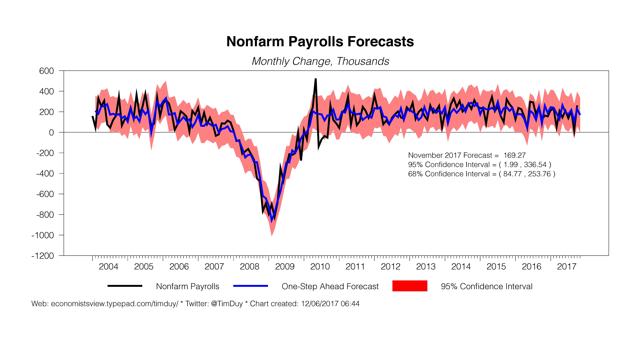 Market participants anticipate the unemployment rate holds constant at 4.1%, with a range of 4.0-4.3%. To be sure, a decline in the unemployment rate would deepen overheating concerns on Constitution Ave. But I would not expect those concerns to ease much if unemployment stayed constant or even rose given the pace of job growth. Given the Fed’s view of labor force growth, they will expect that a payroll gain near the consensus indicates continued downward pressure on unemployment: 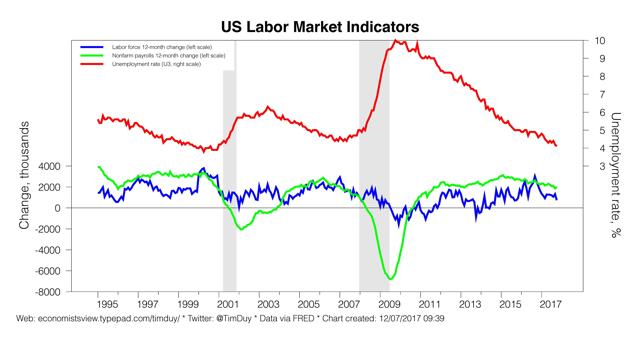 Until job growth slows to something close to 100k a month, the Fed will anticipate further unemployment declines. Hence why it would be much easier for policymakers to use the weak inflation numbers as reason to pause if job growth looked to be trending much lower on a sustainable basis. But if anything the opposite is true – the economy appears to have some considerable momentum behind it and is likely to rack up a third consecutive quarter of 3+% growth as the year ends. This suggests continued demand for labor.

A pickup in wage growth would heighten the Fed's confidence that the economy is indeed operating at full employment. Wall Street expects wage growth of 0.3% for the month, in a range of 0.1-0.4%. This translates into a range of 2.5-2.8% compared to a year ago, putting it potentially at the higher end of recent trends: 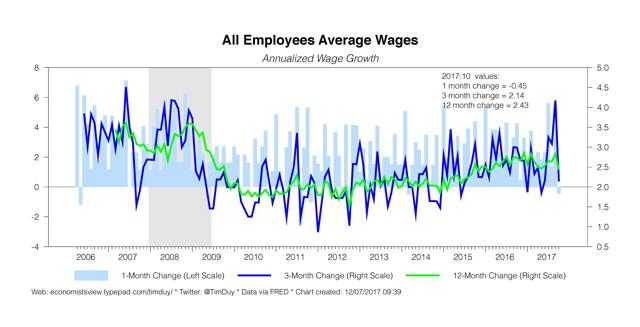 Obviously, the Fed would like to see something on the higher end to help confirm their estimates of full employment. But even if they don’t get higher wages, they will anticipate wages gains will eventually accelerate as long as unemployment is poised to remain on a downward trend.

Bottom Line: The Fed would have an easier time paying attention to the weak inflation numbers if the economy has not been operating near their estimates of full employment and clearly growing at a pace that will soon surpass those estimates. Consequently, a report near consensus expectations will tend to strengthen their resolve regarding further rate hikes. A report that falls short of consensus, however, would likely be deemed as noise given the generally solid path of economic activity this year.

Tim Duy
552 Followers
Tim Duy is the Director of Undergraduate Studies of the Department of Economics at the University of Oregon and the Director of the Oregon Economic Forum. Visit Tim Duy's Fed Watch (http://economistsview.typepad.com/timduy/)
Follow