A flattening yield curve has been a reliable leading indicator of past economic slowdowns, but this time around maybe different.

What does a flattening yield curve mean these days? Perhaps not what it used to.

No doubt, the slope of the yield curve, as measured by the spread between two- and 10-year government bonds, has been flattening since 2014 in both Canada and the United States, and the trend has recently intensified: as we headed into December, the curve sat at its flattest level since the Great Recession. 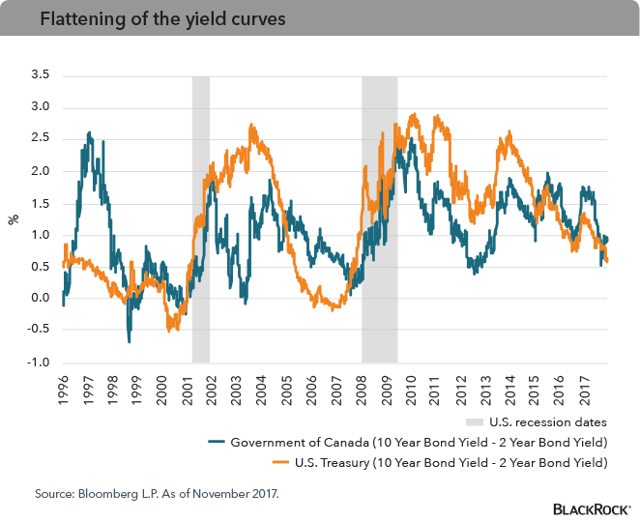 So says the textbook. But we acknowledge that some unusual factors are driving the curve flatter in the post-recession era, and they might not signal slowdown or impending recession:

And yet, against these perhaps-unique factors, the yield curve may still be foreshadowing a slowdown. After all, the era of easy money may be coming to a close. That has negative implications for growth, for both structural and historical reasons.

So while we can see the extenuating circumstances creating a flatter yield curve, we're not quite ready to declare that it's different this time. In fact, we believe that the curve is telling investors to tread carefully and be cautious, in particular, when it comes to risk asset allocation.

Aubrey Basdeo
87 Followers
Aubrey Basdeo, Head of Canadian Fixed Income, is a member of the Product Strategy Team within BlackRock's Model-Based Fixed Income Portfolio Management Group. He leads the product strategy effort in Canada for both the Institutional and iShares businesses. Mr. Basdeo's service with the firm dates back to 2005, including his years with Barclays Global Investors (BGI), which merged with BlackRock in 2009. At BGI, Mr. Basdeo was the head of the Canadian fixed income business and was responsible for both the management of the Canadian institutional and iShares assets as well as delivering fixed income strategies and solutions to BGI clients. Prior to joining BGI in 2005, he was the head of the Relative Value Fixed Income Group at Ontario Teachers' Pension Plan where he led a team of 6 Portfolio Managers and Analysts responsible for managing the Plan's fixed income assets. Mr. Basdeo earned a BSc in engineering from the University of Waterloo in 1983, and an MBA from the University of Toronto in 2003.
Follow
5 Comments
To ensure this doesn’t happen in the future, please enable Javascript and cookies in your browser.
Is this happening to you frequently? Please report it on our feedback forum.
If you have an ad-blocker enabled you may be blocked from proceeding. Please disable your ad-blocker and refresh.