The year 2000 was a transition year in a lot of ways. Though Y2K amounted to mild mass hysteria, people did have to get used to writing the date with 20 in front of the year rather than 19. It was a new millennium (depending on your view of Year 0) that seemed to have started off under the best possible terms.

Not only were stocks on fire at the outset, the economy was, too. The idea of this "new economy" leading toward a permanent new plateau of low inflation growth, driven by the breathtaking productivity gains in telecommunications and computing, seemed quite real on the surface. US GDP advanced by more than 3% in 15 straight quarters from Q2 1996 through Q4 1999, averaging a sizzling 4.7% in those nearly four years of dot-com supremacy.

The labor market was clearly robust, too. In March 2000, the BLS estimates (current benchmarks) that total payrolls (Establishment Survey) rose by 468k from that February. That brought the 6-month average up to +303k, a record of expansion that also mystified economists for its lack of inflationary wage pressures. In any case, the late nineties had roared up to the doorstep of the 21st century.

We all know what happened in April 2000, as investors suddenly got cold feet about first the high flying NASDAQ. It wasn't just stock prices and IPOs, of course, as it really meant one of the major economic themes of that age was in danger being undermined, if not thoroughly debunked. The new economy of the 21st century might not have been grounded so solidly in true economics (small "e") as everyone thought (especially those running the Fed).

The labor market of 2000 was a study in contrasts, starting out as good as it did, but by that June, there was a shocking minus for the monthly headline payroll number. It wasn't just a one-time problem, either, as despite all assurances in all the usual places payrolls would contract again in August and also in October. To end the year 2000, the 6-month average for the Establishment Survey had fallen to just +109k.

It was, again, a year of transition, beginning as the "sky is the limit" dot-com era and ending in almost a tailspin just two months shy of official recession. In many ways, the economy has never recovered from it, the labor market (the eurodollar's giant sucking sound) most prominently.

Because of this and really the length of time involved between then and now, we have forgotten what a good economy actually looks like. There have been, of course, brief moments when we get the sense that something just isn't right, such as the "jobless recovery" of 2002 and 2003, as well as the whole aftermath of the Great "Recession" up until 2014. By and large, however, the economy and the labor market are described in terms that just don't apply if almost by default (it's less bad today, so mustn't it be good?).

The current payroll report for November 2017 suggests a gain of 228k. It is characterized as everything from "solid" to "robust." Is it? How would we really know?

The best way to confirm that suspicion is to compare the current labor statistics to those in the past, calibrating the most recent numbers by those before that were recorded during what were inarguably the best of times; such as the late nineties.

Using monthly payroll gains, though, can be misleading simply because of geometric progression. A gain of 228k in November is not equivalent to the 228k gain in November 2000. The latter is actually a better single month result starting as it did from a smaller base. 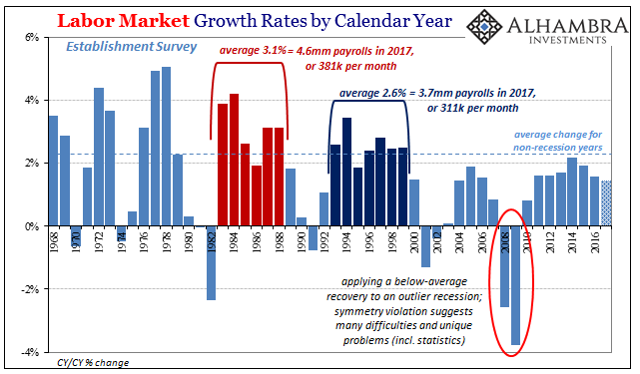 From 1993 through 1999, the labor market gained, on average, 2.6% per year according to the Establishment Survey. Since that time period is universally accepted as one featuring a strong economy, that is our standard for measurement. We can also go back to the eighties for what might amount to as an upper limit of sorts, the economy and labor market at that time being whatever is better than strong and robust - truly awesome.

Translating those average gains into the 2016 base equals an expectation of 3.7mm payrolls gained for 2017 to be as good as the nineties, and 4.6mm, which would signal a splendid economic year consistent with the eighties. Through 11 months so far up to November, the Establishment Survey gives us just 1.9mm for 2017. Assuming December turns out equal or better than November's "good" number, the year should end with a total payroll expansion around 2.1mm, maybe 2.2mm.

That's less than two-thirds of the way to the nineties, and significantly less than half of the eighties. This year, no matter how many months at 200k plus, has not been a good one. In fact, payroll gains in the eleven months so far tallied by the BLS's Establishment Survey are less than those presented in that transitional year of 2000. 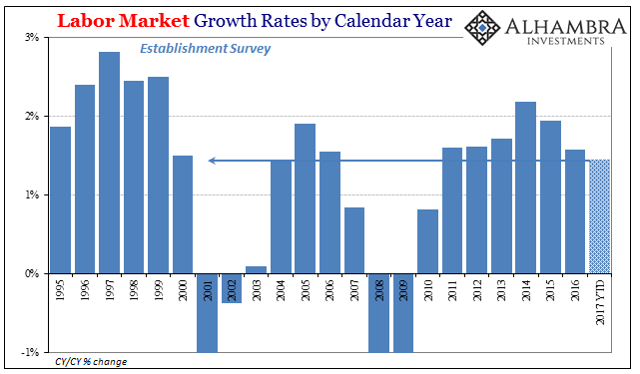 This is how you get the newest generation of American adults yearning in greater numbers for something vastly different, a radical political change if for no other reason than the establishment here continuing to say that everything is good when by every reasonable standard it isn't even close! The "robust" labor market even of the past few years isn't nearly enough to draw in those still sitting on the sidelines struggling, however, they do (parents' basements) to just get along, leaving the economy instead it's "missing" 16.3 million; a number that in a truly robust economy would be falling not rising. 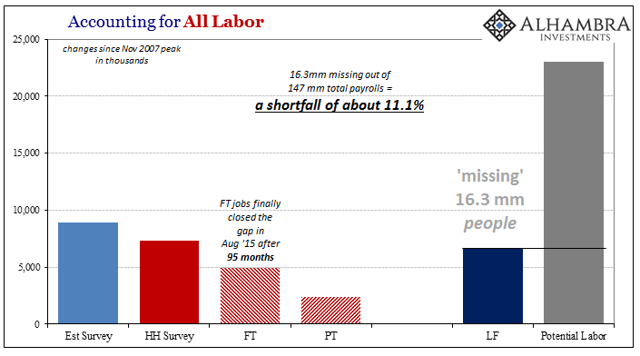 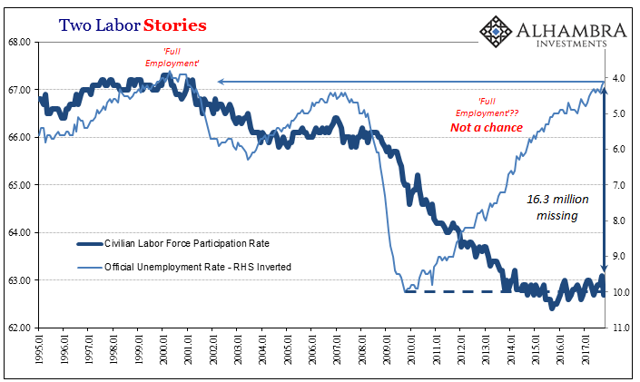 The issue clearly cannot be labor supply (Baby Boomer retirements, heroin, and fentanyl abuse in the Rust Belt) but shrunken labor demand; permanently shrunken economic demand. Therefore, there really should be no expectation for accuracy in the unemployment rate and what that means all around (inflation, baseline growth, monetary policy). 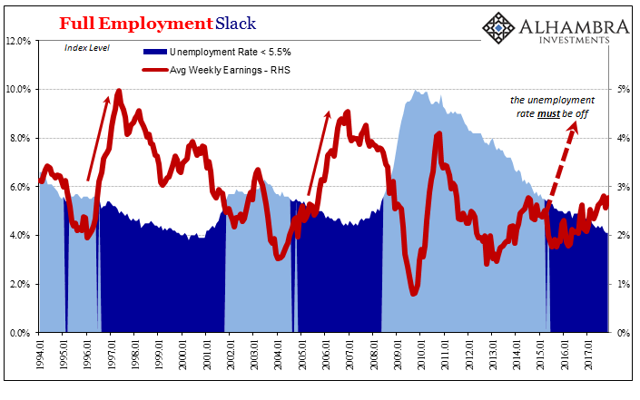 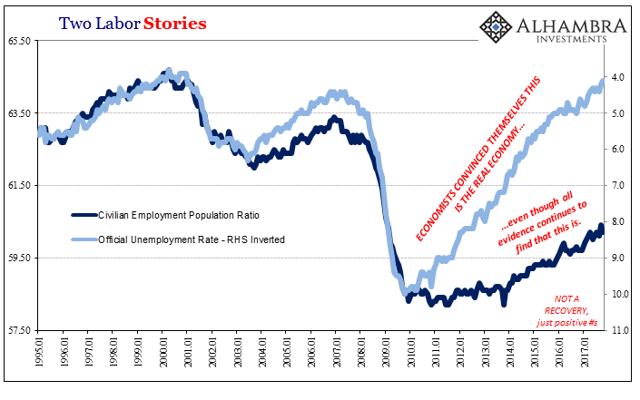 Once again in yet another month where the unemployment rate registers a ridiculous low, wages, and payroll earnings remain stuck at visibly low levels. The average weekly earnings of production and non-supervisory employees rose by just 2.6% year over year in November, after gaining 2.2% in October, 2.6% in September, and 2.7% in August. That's nothing like in the past when the unemployment rate was where it is now. There is nothing like acceleration in earnings, not even solid growth.

I don't mean to make all this about the bond market every time (actually it's appropriate), but the idea that treasuries at the long end have to be wrong has no basis other than misconception or intentional misdirection. The data, including the BLS data, remains firmly on the side of flattening, and like the Establishment Survey's paltry 1.9mm in 2017, it's not even close. 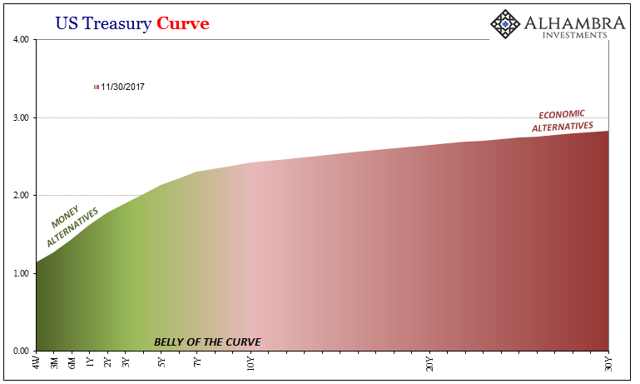 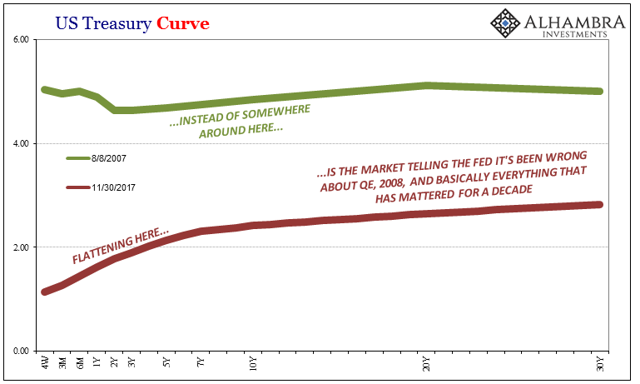 Jeffrey Snider
4.64K Followers
As Head of Global Investment Research for Alhambra Investment Partners, Jeff spearheads the investment research efforts while providing close contact to Alhambra’s client base. Jeff joined Atlantic Capital Management, Inc., in Buffalo, NY, as an intern while completing studies at Canisius College. After graduating in 1996 with a Bachelor’s degree in Finance, Jeff took over the operations of that firm while adding to the portfolio management and stock research process. In 2000, Jeff moved to West Palm Beach to join Tom Nolan with Atlantic Capital Management of Florida, Inc. During the early part of the 2000′s he began to develop the research capability that ACM is known for. As part of the portfolio management team, Jeff was an integral part in growing ACM and building the comprehensive research/management services, and then turning that investment research into outstanding investment performance. As part of that research effort, Jeff authored and published numerous in-depth investment reports that ran contrary to established opinion. In the nearly year and a half run-up to the panic in 2008, Jeff analyzed and reported on the deteriorating state of the economy and markets. In early 2009, while conventional wisdom focused on near-perpetual gloom, his next series of reports provided insight into the formative ending process of the economic contraction and a comprehensive review of factors that were leading to the market’s resurrection. In 2012, after the merger between ACM and Alhambra Investment Partners, Jeff came on board Alhambra as Head of Global Investment Research. Currently, Jeff is published nationally at RealClearMarkets, ZeroHedge, Minyanville and Yahoo!Finance. Jeff holds a FINRA Series 65 Investment Advisor License.
Follow
15 Comments
To ensure this doesn’t happen in the future, please enable Javascript and cookies in your browser.
Is this happening to you frequently? Please report it on our feedback forum.
If you have an ad-blocker enabled you may be blocked from proceeding. Please disable your ad-blocker and refresh.