I updated my economic composite to reflect the release of the U.S. Labor Department's employment report on December 8. The report showed a rise in nonfarm employment of 228,000 in November. Forecasters were looking for a gain of 190,000 as reported by Bloomberg.

Preliminary numbers for the previous two months were essentially unchanged. Increases in nonfarm employment have been averaging a strong 174,000 per month through this year.

Temp employment in November grew 18,000 (+0.6%) from the previous month and climbed 3.9% year over year. The preliminary figures for September and October were pretty much unmodified.

Since the start of the year, the monthly gain in temp employment has averaged a solid 4%. It's an encouraging sign that employers, in the aggregate, are seeing enough strength in their business to bring on temps at this pace.

The November gain in temps was ahead of my estimate, providing more confidence in my current outlook. I continue to forecast modest monthly sequential increases in the BLS temps data series, equating to low single-digit annual growth rates. As a result, the composite continues to signal economic growth for the next 12 to 18 months. The composite is likely to range from 2.0 to 3.5 through November 2018, well into positive territory. I do not expect the economy to tip into recession.

The next Employment Situation report is scheduled to be released on Friday, January 5. I expect to provide an update to the economic composite shortly after the report comes out.

Figure 1 below shows the actual monthly values of the economic composite from 1991 through the present and the estimated values through nearly the end of 2019. In general, the composite remains positive during periods of economic expansion and turns negative during periods of recession. The vertical dashed lines mark the inflection points when the economy is poised to enter recession or has safely exited recession. It typically takes three consecutive months of a change in sign (from positive to negative and vice versa) to confirm a change in outlook. 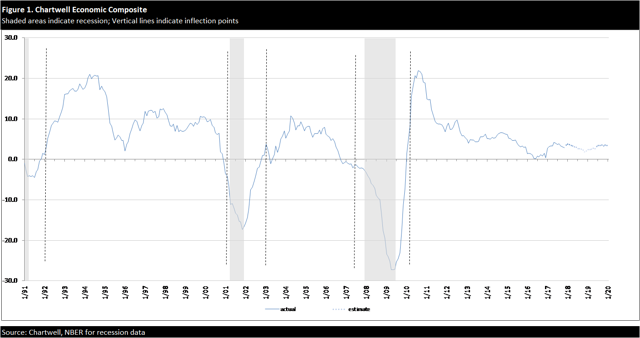 My composite of publicly available forward P/E estimates puts the current forward P/E on the S&P at the intraday trade of 2,649 (Friday, December 8) at 20.0.

The S&P has climbed about 8% in the three months since I made the change from “high end of fair value” to “fairly valued” on August 30, in my article on the second-quarter staffing data from the American Staffing Association.

S&P earnings continue to come in strong. As FactSet noted in its most recent “Earnings Insight” report dated December 1, with 99% of the companies in the S&P 500 reporting results for 3Q17, 74% of those companies beat the mean EPS estimate. Earnings beats tend to cause analysts to raise their forward earnings estimates, which pushes down forward P/Es.

Given the current climate of rising earnings estimates and the euphoria surrounding tax reform, I’m staying with “fair value” for the S&P. Still, I prefer to be a more aggressive buyer at a lower P/E, perhaps around 17.0, which would equate to roughly 2,200 on the S&P. For now, I would still continue to make regularly planned dollar-cost averaging allocations to equities that investors intend to hold for the long term, such as monthly or bi-weekly contributions to a 401(K) plan. 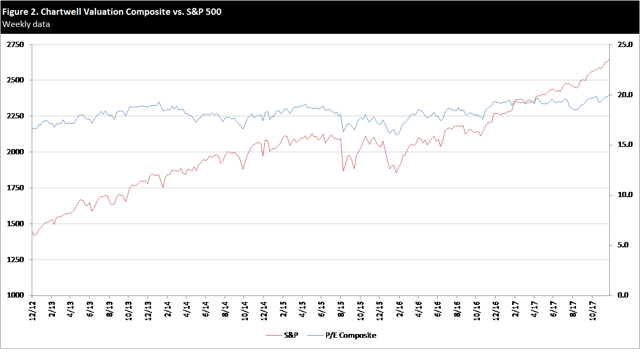 The model’s historical record is depicted in the chart below. The economic composite predicted the beginning and end of the 2000 recession and the 2008 recession. It also predicted the end of the early 1990s recession. Some of the data series used in the composite did not exist before 1990; hence, the start of the track record at that time. 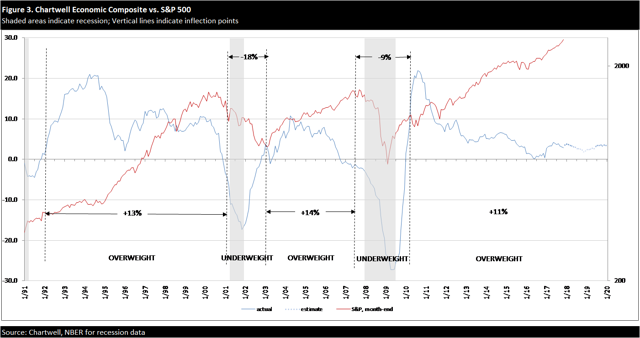 For a full discussion of the Chartwell method, I refer readers to a description of the process in my April employment update, under the heading “Methodology.”

Chris Joseph, CFA
138 Followers
Chartwell Research is published by Chris Joseph, CFA. Chris spent over seven years managing the private market investments in one of the 20 largest university endowments in the U.S. He also worked for many years in the equity research departments of leading investment banks, including five years following companies in the staffing industry. For over 15 years, Chris has been analyzing government and private sources of employment data, which form the basis for the Chartwell economic model.
Follow