The price action in Bitcoin, which is up 14x on the year, makes us wonder if we are analyzing the wrong asset class and investment structure but also reminds us of the story about Joe Kennedy exiting the stock market in 1929 when the shoeshine boy gave him a stock tip.

In DC, the government shutdown was averted with Congress voting to extend funding for two weeks until 22 December. The Senate also named eight members to the Conference committee tasked with the process of reconciling the two versions of the Bill.

The S&P 500 closed the week at a record high. The 2s10s Treasury yield curve neared 50bps - the lowest in more than a decade.

228k jobs were added in November, exceeding the 200k estimate, most likely on the back of hurricane activity. The non-manufacturing ISM declined from a 12-year high and was a touch lower than expectations. The US economy continues to grow at a decent clip, even as wage growth disappoints, suggesting to us (and the market where it is fully priced in) that the Fed will most likely raise rates at the next meeting.

Muni funds have held up surprisingly well with the most recent rise in yields. For instance, 10-year yields have risen 0.3% from September at the same time as Muni funds are flat to slightly up in net price terms.

In the chart below, we show the gross NAV trend together with the 10-year Treasury yield. The chart is fairly clear that NAVs take a hit whenever yields rise which makes sense given most Munis are fixed-rate bonds. However, what we have seen most recently is that as the 10-year yield has crept up to the one-year high, Muni NAVs have rallied. 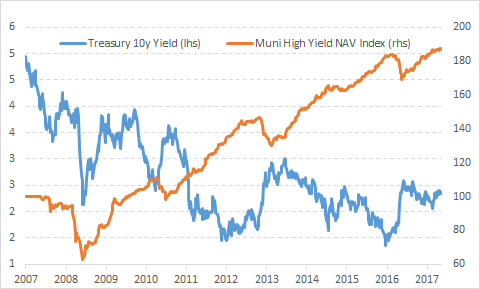 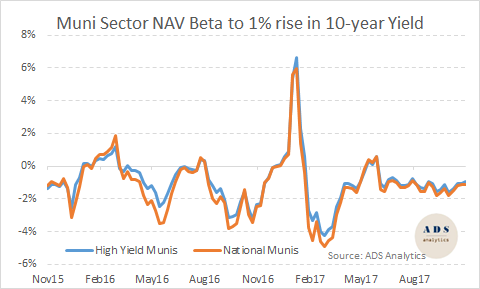 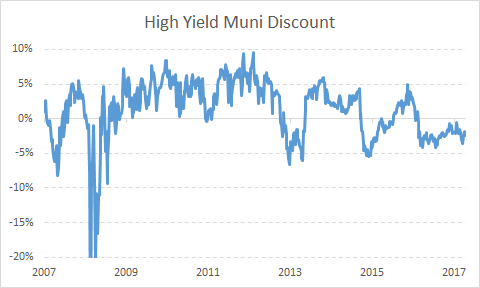 Where is the Alpha in the Muni sector?

Our measure of Alpha is Gross NAV Return adjusted by fund leverage and volatility. We prefer the 3-5 year measure as that gives a fund sufficient period to show that it's not a flash in the pan. We should keep in mind that this measure of Alpha tells us nothing about such important metrics as distribution sustainability and discounts both of which can make a fund vulnerable to a large sell-off.

For instance, the top-rated fund by Alpha in our table below, BBK, has distribution coverage of 60% whereas the third-rated fund MFM has coverage over 100%, so details such as these do matter. In the long term, however, it is all about gross returns so Alpha is important.

Additional disclosure: This article is for information purposes only and does not constitute investment advice or an offer or the solicitation of an offer to buy or sell any securities. Past performance is not a guarantee and may not be repeated. Investment strategies are not suitable for everyone and you should always conduct your own research or speak to a financial advisor. Although information in this document has been obtained from sources believed to be reliable, ADS ANALYTICS LLC does not guarantee its accuracy or completeness and accept no liability for any direct or consequential losses arising from its use. ADS ANALYTICS LLC does not provide tax or legal advice. Any such taxpayer should seek advice based on the taxpayer’s particular circumstances from an independent tax advisor.