This lack of downside volatility has taken place during a nearly uninterrupted increase in the market that began in February last year. Additionally, the market advance since the end of the financial crisis looks remarkable as well. Little or no downside volatility might be understandable if the equity markets were trading sideways this entire time; however, that has not been the case, as can be seen below. 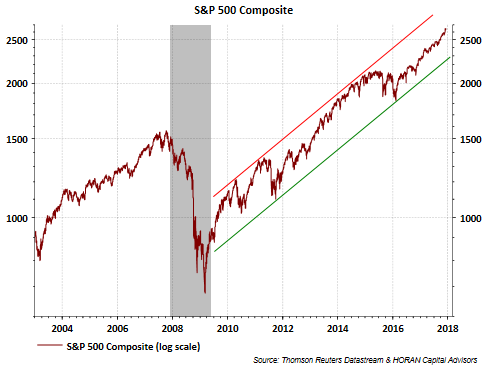 Not surprisingly, the market's uptrend or return has not only been driven by earnings growth, but by expansion in the market's P/E multiple. The below chart shows the S&P 500 Index forward P/E approaching the +1 standard deviation level, yet below the technology bubble peak of nearly 25 times earnings. Stocks do trade at higher multiples in lower interest rate environments. 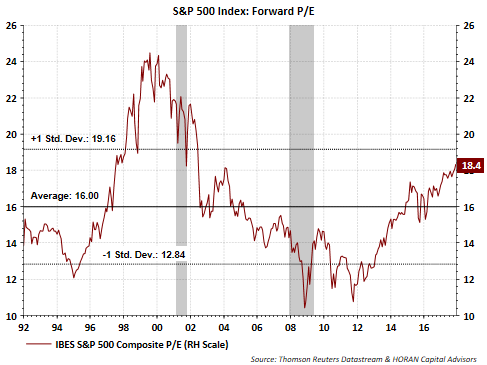 This expansion in the market multiple will not continue unabated, and I believe earnings growth will be a key driver of further market returns going forward. Growth in earnings is anticipated, with the forward earnings estimate growing at a near-double digit rate. 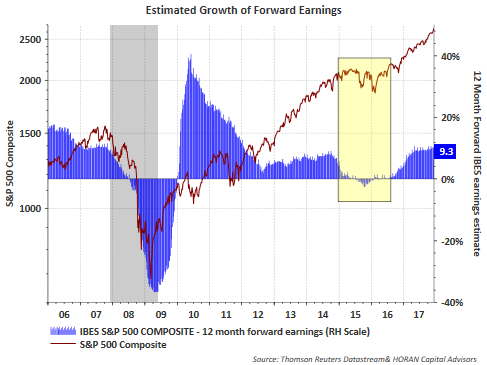 Also supporting a potentially faster earnings growth picture is the tax reform legislation working its way through Congress. Goldman Sachs is estimating tax reform could add 5% to the next twelve months' earnings expectations for the S&P 500 Index. The additional earnings retained by companies would serve to reduce the market's P/E multiple as well. Importantly, even without the benefit of tax reform, the forward P/E multiple is expected to remain level at 18 times earnings when looking out twelve months, as the rate of earnings growth supports a higher market value.

The lack of market volatility and the market's strong return since early 2016 has many investors anticipating a pullback that exceeds the minor dips currently taking place. Consequently, individual investors as well as institutional ones are not expressing overly bullish equity sentiment. Sentiment measures are contrarian ones, and this lack of bullishness is generally associated with higher equity prices in the future and not lower ones.

Below is the recent NAAIM Exposure Index level and a summary of the American Association of Individual Investors Sentiment Survey, neither one expressing excessive optimism. 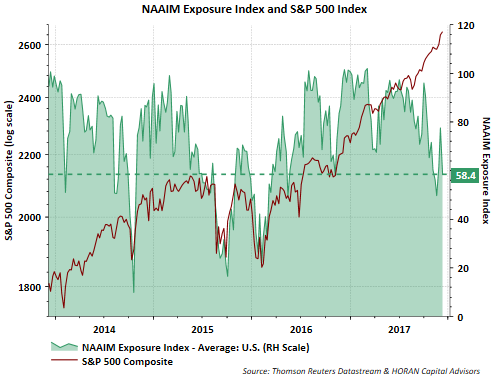 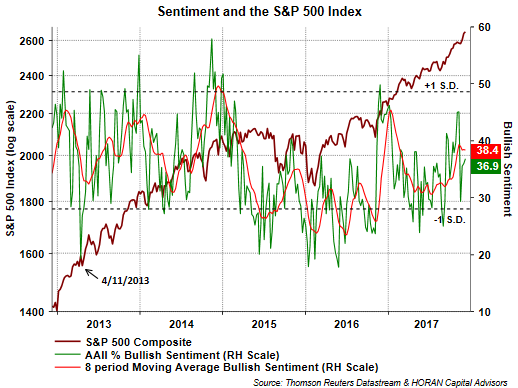 However, as it relates to the individual investor, the monthly AAII Asset Allocation survey shows investors overweight equities at a nearly 70% allocation to the asset class and their cash allocation of 14% and below the average of 23%. It would appear investors' actions are not matching their stated sentiment views. 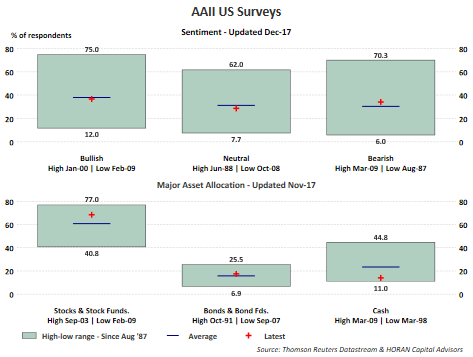 And lastly, from a technical perspective, the common stock only advance decline line has resumed its uptrend, after trending lower for most of this year through September. This is a favorable technical development for the market. 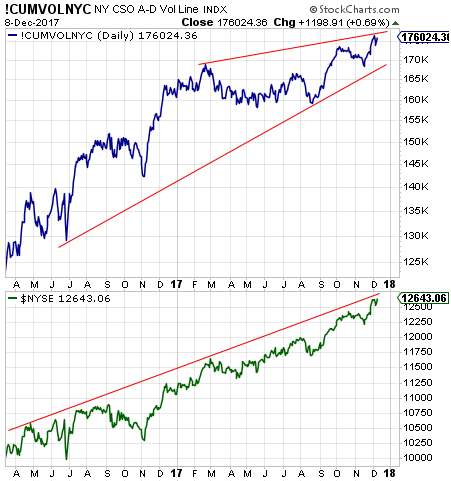 And just as the market continued to move higher in the first half of this year in spite of a downward sloping A/D line noted above, there are divergences showing in other technical indicators.

In the below chart, the On Balance Volume Indicator (OBV) is trending lower, while the Money Flow Index (MFI) continues to trend higher. Readers can gain additional perspective on the differences between the MFI and OBV indicators, but the fact the volume-oriented OBV indicator is trending lower, and if volume leads price, a downward trending OBV is an indication the market's direction could change course as well. 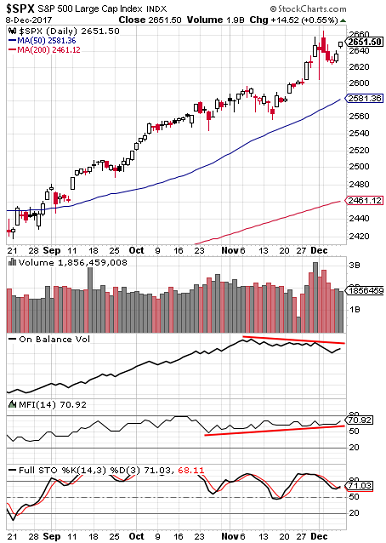 As 2017 is nearing an end, we would expect the level of market volatility in 2018 to be higher and at a more normal level than what has occurred this year. As noted in this post, we do believe the earnings picture for companies is favorable and supportive of higher equity prices next year. Additionally, as I have noted in several recent posts, one titled "Synchronized Global Growth," the economic data in the U.S and around the world is favorable and supportive of a positive equity market in 2018.

Certainly of concern is the complacency that seems to be a part of this market, partly due to what seems like no alternative to stocks. But given the favorable global economic backdrop, a normal market pullback should be just that and not reflective of a more bearish secular trend change, all else being equal.

And finally, to keep matters in perspective, the average market decline since 1980 is about 14%. If this type of average decline materializes, it would be equal to shaving 3,400 points off of the Dow Jones Industrial Average Index. This is decidedly different than the 200-300 point dips that have been characteristic of the low volatility market this year.

David I. Templeton, CFA
3.15K Followers
HORAN Capital Advisors is an SEC registered investment advisor that manages investment portfolios for individuals and institutions. Our firm utilizes a disciplined investing approach that should create wealth for our clients over time. Our investment bias is to invest in companies that generate a steady return over time, i.e., singles and doubles. This singles and doubles approach tends to lead to investments in higher quality dividend growth/cash flow growth companies. On the other hand, there are times when a company's stock price seems to be trading below its fair valuation. Short term gains are possible in these situations. I have been managing investment portfolios for individuals and institutions for over fifteen years and believe investing is like running a marathon and not a sprint. Taking the road less traveled, more often than not, leads to higher returns. Visit: The Blog of HORAN Capital Advisors at (https://horanassoc.com/insights/market-commentary-blog)
Follow
2 Comments
To ensure this doesn’t happen in the future, please enable Javascript and cookies in your browser.
Is this happening to you frequently? Please report it on our feedback forum.
If you have an ad-blocker enabled you may be blocked from proceeding. Please disable your ad-blocker and refresh.