Cash Flow Kingdom members were able to review and discuss this article early last week. They also have access to a tracker tool which contains rankings of various specific Natural Gas MLP equities according to valuation, management effectiveness, and risk.

Starting in April, a concerted effort to push tax reform promoted a divergence between those seen as winners, the Russell 2000 (+13%), and those seen as losers, MLPs (-17.5%). The MLPs were seen as losers because they already enjoy an advantaged tax status, something which becomes relatively less valuable to investors with tax reform. 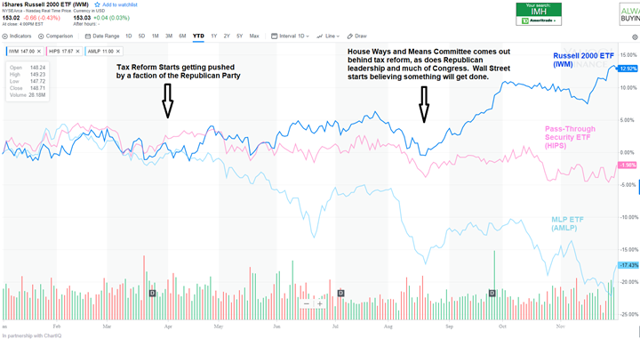 However, now that the bill is almost complete, we see it also includes meaningful benefits to MLPs unitholders. These include:

Thus, a corporate shareholder indirectly benefits when a corporation they own pays 20% in taxes instead of 35%, 15% less. However, the shareholder only gets to keep 80% of that net benefit, the rest going to the IRS in the form of dividend or capital gain tax, so the net benefit is 12% (=15% *80%). If that person were in the 33% tax bracket, they directly profit from paying 25% on MLP business income instead of the 33% they otherwise would have, an 8% improvement. If in the 39% tax bracket, they get a 14% improvement. Whether the corporates or MLPs see more improvement depends on the tax bracket of the person, but either way, it is not so drastic as to justify a 30% relative swing in price.

Looking at this somewhat simplistically, initially for a high income corporate investor, under the new system, taxes claim 36% of EBIT (=20% corporate + (80% remaining * 20% dividend or capital gains tax rate)). For that same high income MLP investor, taxes initially claim 25% (= 0% business level + 25% limited partner level). So, while the corporate investor gained more from this particular bill, at least initially, the MLP investor remains the better off. This makes me think the 30.5% relative swing between the two (+13% Russell 2000, -17.5% MLPs) has been a bit overdone.

Additionally, towards the latter half of this year, energy prices (represented by DBE) began to increase. 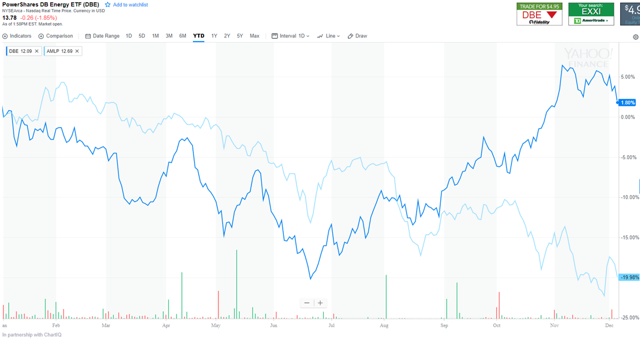 Most MLPs do not directly benefit from higher energy prices; however, they can encourage drilling, volume, and thus eventually support longer term MLP demand.

In North America, drilling counts have been relatively flat for the latter half of 2017.

Anecdotally, what I have heard is many drilling companies used up much of their 2017 approved capex budgets during the first part of the year. However, with the new year also comes new capex budgets and funding. Drilling budgets which are likely to increase, given the previously mentioned increase in energy prices which occurred in the second half of 2017. There are currently 1,151 rigs out there drilling new holes, a slight increase from last week's 1,138. With new budget approvals, that number may increase further.

As a result of these two factors, I believe going forward the advantage may lie with the MLP investor. But it is not just MLPs in general which I think have an advantage, but rather natural gas-focused MLPs specifically.

Worldwide LNG trade is continuing to grow, up 7.5% in 2016 and a whopping 13% in the first half of 2017 according to the IEA (International Energy Agency). 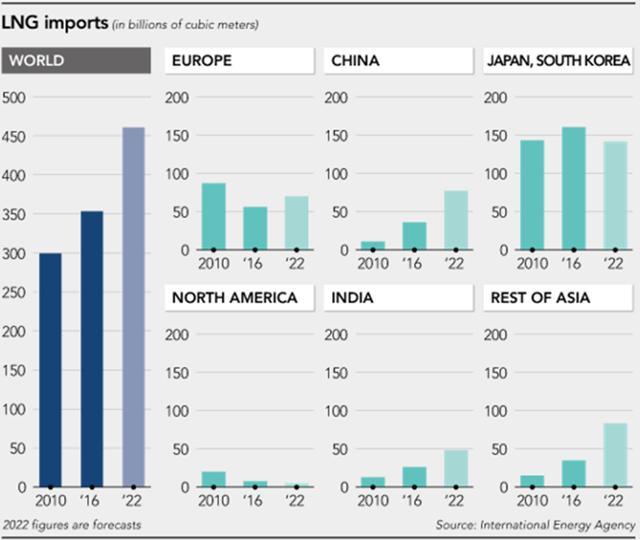 Additionally, the number of gas-focused rigs appears to be doing a little better than the overall rig counts already mentioned.

And thanks to efficiency gains, natural gas production volume continues to increase significantly across all major US regions: 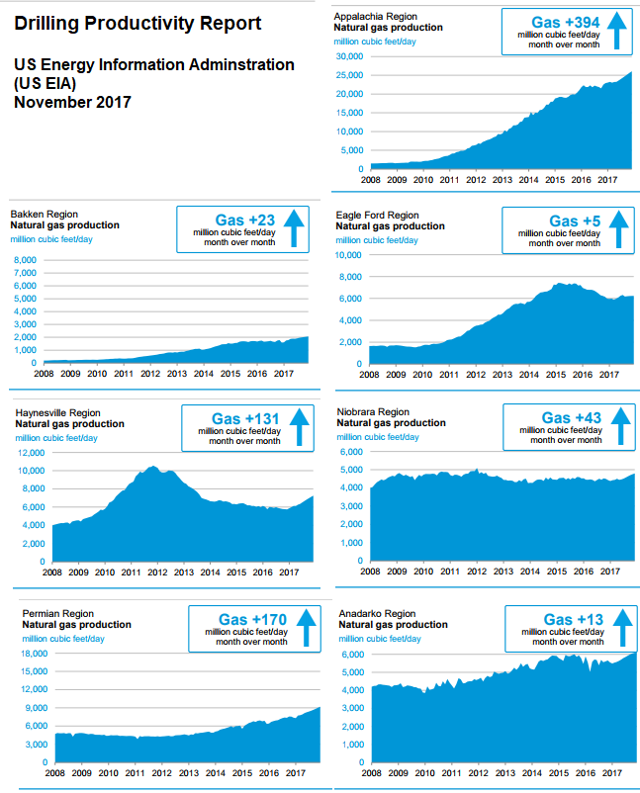 The drivers for these ongoing volume increases are clear. New US-based multi-billion-dollar fertilizer, chemical, electrical generation, and other high natural gas use plants are coming online each year.

And there is significant incentive to increase exports. 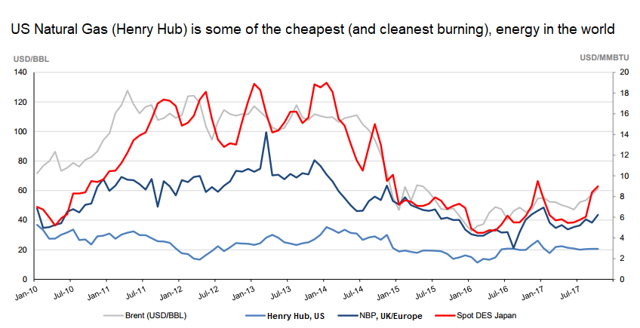 Much of this natural gas export volume is still done the old fashion way via pipelines to Canada and Mexico. 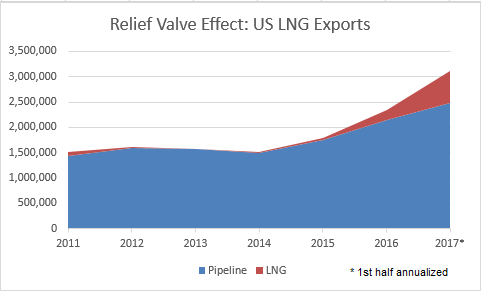 However, increases in worldwide LNG shipping trade are also being seen in significant gains to US export capacity. By end of year, it is forecasted the Sabine Pass LNG facility will have double its capacity run rate (vs. 2016). In addition, the Dominion Cove Point, Maryland export terminal is scheduled to come online in Q4. The Cameron Parish Louisiana LNG project is expected to export 1 Bcf/d by July 2018. And Veresen (VSN.TO) hopes the "third application will be the charm" on its proposed Coos Bay, Oregon project. If we look at the figures, most growth in the international natural gas trade is being supplied either out of North America or Australia.

The US may one day have a major LNG export terminal (or two) on the Gulf, East Coast, and West Coast. Indeed, for the next five years, significant growth in North America based LNG export seems assured.

Whether this will cause US natural gas prices to go up or down depends on day-to-day supply and demand imbalances. However, it is pretty clear - increased domestic demand and increased export demand are causing overall volumes to go nowhere but up. These volume increases are all that is necessary for natural gas MLPs and a number of other Cash Flow Kingdom holdings to do quite well.

As an ETN, a note guaranteed by UBS, MLPG has some unique characteristics. First, it relies on the continuing good credit of the issuer, UBS, and currently pays 6% interest, not dividends. The payout is fully taxable at the holder's marginal income tax rates, and thus may be best held in an IRA. As a partial trade-off, however, there is no K-1 which the investor needs to deal with. MLPG has a 0.85% annual expense ratio. Trading volume is low, so a limit order should probably be used.

If you value the income stability a collection of large cap, natural gas focused, MLPs can deliver, you may wish to consider an MLPG investment in your IRA. It should benefit from a general increase in US natural gas volumes and may see a price rebound if, as I suspect, the MLP sell-off is overdone. However, in taxable accounts, I would still recommend holding the individual securities which continue to have significant tax deferral benefits. While most are larger than what I typically focus on, I may feature some of the natural gas MLP equities from the tracker tool tab in future articles. I don't honestly think I am going to be able to add a lot that isn't already priced in; however, readers do seem interested, and I wouldn't mind adding one or two to my own taxable account.

Darren's started his career as the Assistant Manager of a 7-Eleven; eight years later he was responsible for 14 stores. This imparted a business sense he still finds quite useful today.

After getting his MBA, Darren then started doing strategic financial planning and analysis for Silicon Valley firms eventually achieving Director's status. These strategy, modeling and analysis skills, as well as a lot of hours in boardrooms talking with executives, transferred well into stock investment. It allowed him to first retire in 2006 at the age of 40.

With Cash Flow Klub, Darren is now seeking to help others by sharing the analysis and real-world strategies that allowed him to retire early. He remains a full-time investor whose primary source of income is dividend and interest from his investments. He eats what he kills.

Disclosure: I am/we are long MLPG. I wrote this article myself, and it expresses my own opinions. I am not receiving compensation for it (other than from Seeking Alpha). I have no business relationship with any company whose stock is mentioned in this article.

Additional disclosure: This article covers a number of risky investments. I do not know you: your goals, risk tolerance, or particular situation. Therefore, I cannot recommend this or for that matter any investment to you. Please do your own further due diligence.