On November 30, 2017, the International Cocoa Organization (ICCO) released its latest 2016/17 cocoa year estimates. Given the prevalence of production in Côte d'Ivoire, Ghana and Brazil, timeline of the cocoa (NIB) year mainly corresponds to production seasonality in these three countries, and runs from October through September.

Throughout 2017, agency’s production estimates for the 2016/17 season year have been continuously revised higher to reflect better crop conditions in the African region. Upped by another 33 thousand tonnes in November update, latest forecast – at 4.733 million tonnes – is slightly higher than that of the previous periods:

The cocoa prices’ 2015 run-up and the subsequent plunge in 2016 were mainly a function of a strong supply balance shakedown. Having suffered two consecutive production decreases during the 2014/15 and 2015/16 season years, global production demonstrated a colossal annual reversal of 18.1 percent in 2016/17. A sudden switch from a deficit to a multi-year record in production surplus fuelled a substantial uptick in stocks-to-grindings ratio and a notable build-up in ending stocks.

With the ratio at a 5-year high, one may draw a parallel between the current and the 2010/11 cocoa market situation. For reasons mainly associated with weather seasonality and decreased fertilizer spending and acreage, historical trends indicate that a second consecutive production increase is much less probable after the 2016/17 season record. 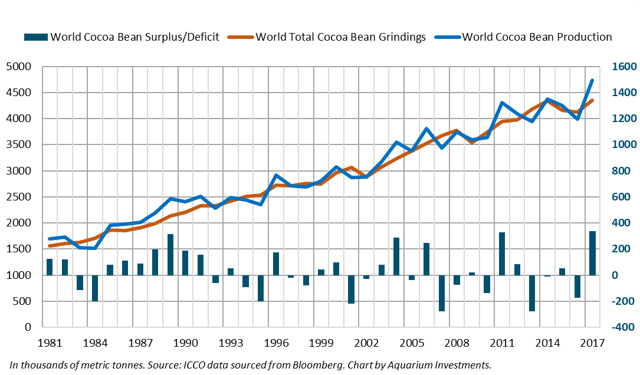 The situation is different for the stocks-to-grinding ratio, however. Following an increase to 41.6 vs. a multi-year low of 34.2 percent a year earlier, it might take at least another season year for the ratio to signal a cocoa market tightening given the high ending stock levels. In contrast with the annual production decrease during the 2011/12 season year, the ratio – signalling modest demand growth – demonstrated a 1.7 percentage point increase to 46 percent. Incapable of keeping up with production growth, softer demand dynamics resulted in a significant cocoa supply glut. 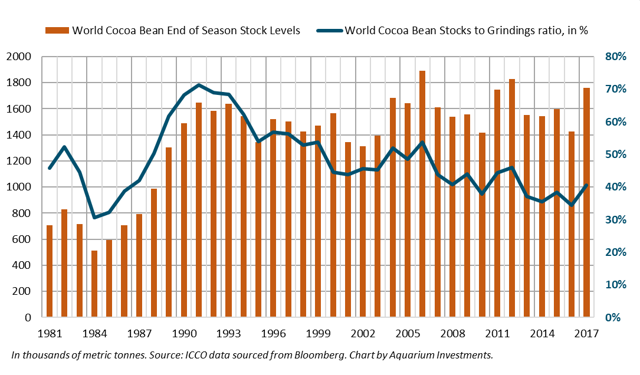 Fundamental perspective offers limited clarity on the future cocoa price direction at this point, with an immediate rebound appearing increasingly unlikely. Although the low price levels may persist in the coming months, latest positioning data is crucial as the market is starting to digest next season’s weather and crop data.

After experiencing an all-time peak in non-commercial short positions in mid-July, cocoa futures closely followed the turnaround in non-commercial exposure before correcting in November. One should note that a shift to a net-short large trader positioning has been a rare occurrence over the last 10 years. It is also important to note that cocoa prices have a tendency to plateau after a supply glut occurs, sometimes fuelling a multi-year consolidation in a certain price channel.

While it remains unclear whether the 1,800-2,200 trading range is set to become a new home for cocoa prices over the next couple of quarters or not, downside risks appear to be gradually diminishing.

The following catalysts are likely to go into play over the next couple of quarters:

Despite creating an uncertain 2017/18 crop outlook, current cocoa market situation might create attractive option writing opportunities. Taking advantage of the recent correction, one may choose to sell longer-dated out-of-money puts to capitalize on the possibility that cocoa prices are nearing a bottom.

There were no material changes to wheat market outlook in November. According to the latest USDA forecasts, global inventories are set to reach record 267.5 million tons by the mid-2018. With CFTC data indicating a notable build-up in non-commercials short positions, wheat futures entered December on a quite downbeat note.

Despite a decrease in net-short non-commercial exposure in the second half on November, corn futures continue to trade at lower levels of 3.5-3.65 US dollars per bushel.

Per USDA, global soybean demand for 2017/18 is currently seen at 302 million tons. While a record, ending stocks are still forecast at 98 million tons due to upbeat crop data. In parallel with a significant build-up in net-long non-commercial positions, soybean futures have been in an uptrend since mid-August.

Global sugar production in the 2017/18 season year is currently seen at 185 vs. 171.5 million tons in 2016/17. With a modest consumption level increase to 174.2 million tons, ending global stocks are forecast to reach 40.8 million tons. Oversupply outlook continues to weigh on the sugar market, with futures currently demonstrating a strong correction in the first half of December.

Supply balance in millions of tons, ending stocks' values are displayed on the right axis. Source: Made by the authors using the data from USDA and Bloomberg.

There was only a minor change to USDA’s cotton outlook in November, except for a minor global ending stocks revision to 90.9 million tons. Following a strong reversal in later October, large traders have increased their net-long exposure to cotton futures to levels last seen in June.

Supply balance in millions of bales, ending stocks' values are displayed on the right axis. Source: USDA and Bloomberg, chart by Aquarium Investments.

Additional disclosure: Aquarium Investments is an EU-based company specializing in global asset management services. This article has been written for informational purposes only. Nothing expressed in the article may be considered an investment advice.