There’s a big tide of optimism sweeping the nation’s small businesses. While individuals seem to hate the current GOP tax plan as much as they disliked Obamacare when it was first passed, small business owners are the most optimistic they have been since the early 1980s in the days of “Stranger Things.” In the most recent release yesterday, the NFIB’s Small Business Optimism Index spiked from 103.8 up to 107.5. That was well ahead of consensus expectations and took out the post-2000 high of 107.4 from November 2004. 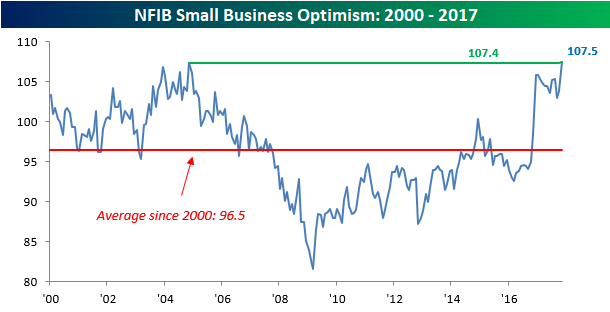 The NFIB (known to be politically biased towards the right) summed up the optimism pretty succinctly in the release earlier yesterday:

Not since the roaring Reagan economy has small business optimism been as high as it was in November, according to the National Federation of Independent Business (NFIB) Index of Small Business Optimism, released today.

“We haven’t seen this kind of optimism in 34 years, and we’ve seen it only once in the 44 years that NFIB has been conducting this research,” said NFIB President and CEO Juanita Duggan. “Small business owners are exuberant about the economy, and they are ready to lead the U.S. economy in a period of robust growth.” 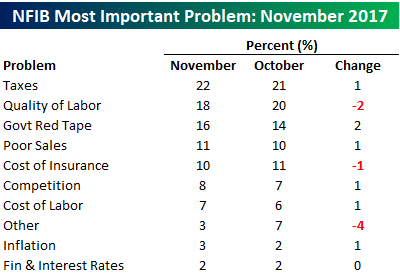 Finally, the commentary section of this month’s report closed out with the optimistic forecast that “The NFIB indicators clearly anticipate further upticks in economic growth, perhaps pushing up toward 4 percent GDP growth for the fourth quarter.” 4% growth? Wouldn’t that be nice!

Bespoke Investment Group
44.41K Followers
Bespoke Investment Group provides some of the most original content and intuitive thinking on the Street. Founded by Paul Hickey and Justin Walters, formerly of Birinyi Associates and creators of the acclaimed TickerSense blog, Bespoke offers multiple products that allow anyone, from institutions to the most modest investor, to gain the data and knowledge necessary to make intelligent and profitable investment decisions. Along with running their Think B.I.G. finance blog, Bespoke provides timely investment ideas through its Bespoke Premium (http://bespokepremium.com/) subscription service and also manages money (http://bespokepremium.com/mm) for high net worth individuals. Visit: Bespoke Investment Group (http://bespokeinvest.com/)
Follow
To ensure this doesn’t happen in the future, please enable Javascript and cookies in your browser.
Is this happening to you frequently? Please report it on our feedback forum.
If you have an ad-blocker enabled you may be blocked from proceeding. Please disable your ad-blocker and refresh.