With “blockchain mania” in full swing, Marathon Patent Group Inc. (NASDAQ:NASDAQ:MARA) has seemingly hitched itself to the blockchain wagon and rode the wave to nearly 5x returns in a matter of weeks. The company’s blockchain focus has come about through a series of rapid shifts that are eerily similar to the questionable moves we identified in our recent piece on Riot Blockchain (NASDAQ:RIOT).

In Marathon’s latest 10-Q filed on November 20th the company describes its business as being “to acquire patents and patent rights and to monetize the value of those assets to generate revenue and profit for the Company.”

Yet despite that stated business model, the company has seemingly abandoned much of its focus on patents and patent rights and instead shifted gears toward blockchain assets including cryptomining.

Rather than purchase cryptomining assets directly from manufacturers or suppliers, the company decided instead to purchase an entity that owned the cryptomining assets. On November 2, 2017, the company announced via press release that it had “entered into a definitive purchase agreement to acquire 100% ownership of Global Bit Ventures Inc. (“GBV”), a digital asset technology company that mines cryptocurrencies.”

The company has been scant with details on the transaction thus far. On a conference call following the announcement, the company detailed that the acquisition includes 1,000 Ethereum mining servers, though it failed to disclose the cost or value of the servers when asked by an investor. Another investor asked “How long has the company (GBV) been in existence?” The company declined to disclose this information as well, suggesting instead that they would wait until an S-4 was filed before disclosing.

We found the above non-disclosures to be troubling. The agreement with GBV stipulates that the company is to issue 126,674,557 shares of common stock in exchange for 100% of the shares of GBV, which represented roughly $188.7 million at the time of the announcement (and roughly $750 million at current share prices.) The Agreement And Plan of Merger filing by Marathon detailed the ownership of Company Shareholders (ie: GBV shareholders) at the closing of the transaction:

Consequently, the agreement and merger plan leaves current Marathon common shareholders with only 19% of Marathon on a fully diluted basis at the time of closing. Given the extremely high cost of the acquisition, we would have fully expected the company to answer basic questions about the value of the assets being acquired and details around the entity.

We decided to check the Nevada Secretary of State filings on GBV for ourselves and we found that the entity was established August 9, 2017, mere months before the transaction was announced.

We also found that one beneficiary of the transaction appears be none other than Marathon’s former CFO, EVP and Secretary, John Stetson. A Uniform Commercial Code (UCC) filing shows what appears to be a previously undisclosed security arrangement between HS Contrarian Investments LLC (“HS Contrarian”) and GBV. HS Contrarian is run by John Stetson, according to the firm’s website. Stetson’s previous roles at Marathon are described in SEC filings. 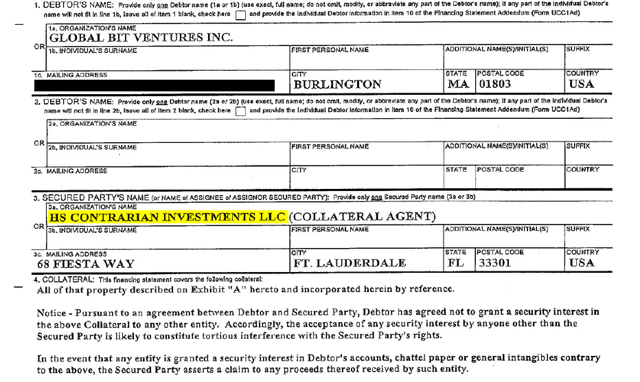 We have contacted Marathon's investor relations and asked about the relationship between GBV and Stetson, and whether there was any public disclosure of the relationship. Should we receive a reply from the company we will update this accordingly.

Aside from the security interest between GBV and Stetson’s firm, we also noticed another interesting connection. GBV’s officer/director filings with the Nevada Secretary of State only listed one individual, Jesse Sutton. Sutton was the former CEO and co-founder of Majesco Entertainment, according to his Linkedin Profile. The Majesco entity morphed late last year into a company called PolarityTE through a reverse merger. Stetson is currently the CFO, EVP, and Director of PolarityTE (NASDAQ:COOL), highlighting that the interwoven business interests of Stetson and Sutton appear to have converged with GBV.

(On a related note, we wrote an article last week about PolarityTE and its public entity which has been reverse merged at least six times into a variety of different businesses and which we believe is replete with its own unique set of red flags.)

On the subject of executive crossover, Marathon appears to have significant overlap in the individuals involved with Riot Blockchain, another public company that abruptly reinvented itself as a blockchain play. A recently amended S-3 filing for Riot shows that Stetson participated in common stock, convertible preferred stock, and warrant transactions with Riot (note that Riot has recently changed its name from Bioptix Inc. and that the amended S-3 filing still reflects the old company name). Aside from Stetson, the recently named CEO of Riot Blockchain, John O’Rourke, is to hold an approximate 41.04% stake in the common stock of Marathon per a November 29th prospectus amendment.

Aside from the links with key individuals, we noticed several other parallels with Riot. In our piece about Riot we described how Riot also decided to purchase an entity containing cryptomining equipment and how we believed it to be an irregular transaction. When examining Riot’s transaction side by side with Marathon's we identified the following:

We find it concerning that these two separate companies both enacted dramatic pivots toward blockchain business models seemingly in lockstep and in such unusual fashion.

The company recently announced that BDO had resigned as its auditor near the end of November. Per an 8-K filing:

Per the same 8-K filing, on November 30, 2017, the board appointed RBSM LLP as the company’s independent registered public accounting firm. We checked the Public Company Accounting Oversight Board (PCAOB) website and found the latest inspection report on RBSM. The report highlighted what appeared to be some significant deficiencies:

Certain deficiencies identified were of such significance that it appeared to the inspection team that the Firm, at the time it issued its audit report, had not obtained sufficient appropriate audit evidence to support its opinion that the financial statements were presented fairly, in all material respects, in accordance with the applicable financial reporting framework. In other words, in these audits, the auditor issued an opinion without satisfying its fundamental obligation to obtain reasonable assurance about whether the financial statements were free of material misstatement.

The report went on to detail individual failures relating to audit procedures on several of its issuer clients. In one instance it noted a “failure to perform sufficient procedures to test the existence, completeness, and valuation of assets acquired and liabilities assumed in business combinations."

Note that the PCAOB report also underscored that “the fact that one or more deficiencies in an audit reach this level of significance does not necessarily indicate that the financial statements are materially misstated” and that inspection teams are limited to information available from the auditor. Nonetheless, we view the resignation of BDO and the replacement with a lesser-known firm of questionable quality to be another reason to tread carefully.

We have no strong bearish or bullish view on the future of blockchain technology. We genuinely hope the technology is implemented broadly and that currency and information can be effectively decentralized through its use. Regardless of one's views on blockchain technology however, we think Marathon is a name that investors should avoid. We urge cautious investing to all.

Hindenburg Investment Research
2.7K Followers
Founded by Nate Anderson, CFA, CAIA, Hindenburg Investment Research specializes in forensic research and activist short-selling. Our experience in the investment management industry spans over a decade, with a historical focus on buy side equity, credit, and derivatives analysis. While we use fundamental analysis to aid our investment decision-making, we believe the best edge can be had by uncovering hard-to-find information from atypical sources. In particular we look for situations where companies may have any combination of (i) accounting irregularities (ii) bad actors in management or key service provider roles (iii) undisclosed related-party transactions (iv) or illegal/unethical business or financial reporting practices. Tips and feedback can be sent to info@hindenburgresearch.com
Follow

Disclosure: I am/we are short MARA, RIOT, COOL. I wrote this article myself, and it expresses my own opinions. I am not receiving compensation for it. I have no business relationship with any company whose stock is mentioned in this article.

Additional disclosure: Use of Hindenburg Research’s research is at your own risk. In no event should Hindenburg Research or any affiliated party be liable for any direct or indirect trading losses caused by any information in this report. You further agree to do your own research and due diligence, consult your own financial, legal, and tax advisors before making any investment decision with respect to transacting in any securities covered herein. You should assume that as of the publication date of any short-biased report or letter, Hindenburg Research (possibly along with or through our members, partners, affiliates, employees, and/or consultants) along with our clients and/or investors has a short position in all stocks (and/or options of the stock) covered herein, and therefore stands to realize significant gains in the event that the price of any stock covered herein declines. Following publication of any report or letter, we intend to continue transacting in the securities covered herein, and we may be long, short, or neutral at any time hereafter regardless of our initial recommendation, conclusions, or opinions. This is not an offer to sell or a solicitation of an offer to buy any security, nor shall any security be offered or sold to any person, in any jurisdiction in which such offer would be unlawful under the securities laws of such jurisdiction. Hindenburg Research is not registered as an investment advisor in the United States or have similar registration in any other jurisdiction. To the best of our ability and belief, all information contained herein is accurate and reliable, and has been obtained from public sources we believe to be accurate and reliable, and who are not insiders or connected persons of the stock covered herein or who may otherwise owe any fiduciary duty or duty of confidentiality to the issuer. However, such information is presented “as is,” without warranty of any kind – whether express or implied. Hindenburg Research makes no representation, express or implied, as to the accuracy, timeliness, or completeness of any such information or with regard to the results to be obtained from its use. All expressions of opinion are subject to change without notice, and Hindenburg Research does not undertake to update or supplement this report or any of the information contained herein. Hindenburg Research and the terms, logos and marks included on this report are proprietary materials. Copyright in the pages and in the screens of this report, and in the information and material therein, is proprietary material owned by Hindenburg Research unless otherwise indicated. Unless otherwise noted, all information provided in this report is subject to copyright and trademark laws. Logos and marks contained in links to third party sites belong to their respective owners. All users may not reproduce, modify, copy, alter in any way, distribute, sell, resell, transmit, transfer, license, assign or publish such information.