The markets were busy yesterday as central bank monetary policy meetings continued. After the Fed's rate hike decision on Wednesday, Thursday was all about the central banks in Europe.

The ECB's monetary policy meeting saw the central bank leaving monetary policy unchanged. The ECB gave its economic projections which saw an upbeat forecast. However, inflation was expected to still remain below the ECB's 2% inflation target rate by 2020.

The SNB's meeting was largely a non-event. Focus was mostly on the BoE's meeting. The central bank sounded optimistic that inflation was nearing its peak at 3.1%. It however said that GDP growth could slow in the coming quarters. The BoE expects a weaker Q4 GDP growth.

Looking ahead, the economic calendar today is quiet for the most part. The trade balance figures from the Eurozone are expected to be released earlier in the day while BoE Chief Economist Andy Haldane is expected to speak.

In the NY Trading session, the Canadian manufacturing sales report will be coming out and the NY Fed will be releasing the Empire State Manufacturing index report. Economists forecast the index will slightly dip to 18.8 for December. 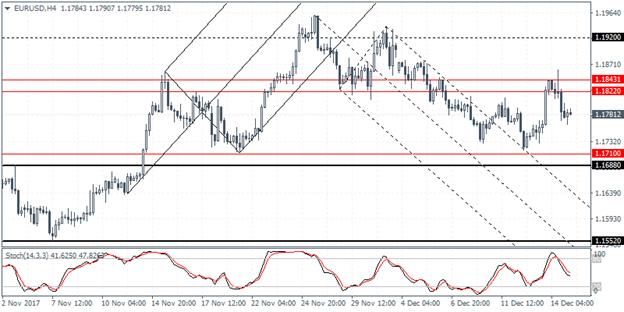 EURUSD (1.1781): The EURUSD posted declines yesterday as the ECB left the monetary policy unchanged. The long term inflation forecasts showed that consumer prices in the Eurozone could remain below the ECB's inflation target rate. This hit the sentiment in the euro which extended losses. However, as price action remains supported above the 1.1710 level of support, the bias remains to the upside. On the intraday basis, the reversal near the resistance level of 1.1822 signals a continuation to the downside. The intraday support at 1.1710 could be tested in the near term as the currency pair can be seen maintaining a sideways range within the levels mentioned. 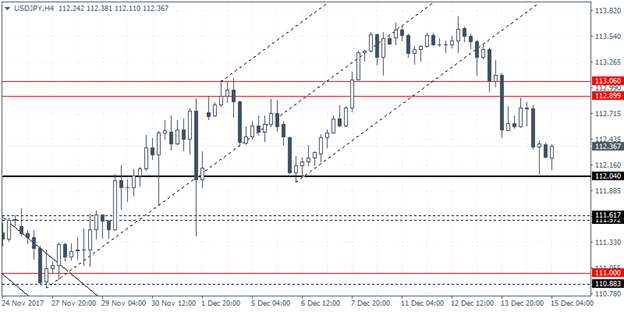 USDJPY (112.36): The USDJPY extended declines for the second day as price action is seen now trading close to the support level at 112.04 region. In the short term, establishing support at this level could signal a bounce to the upside. USDJPY is expected to maintain the range within 113.00 and 112.04 levels of resistance and support. A breakout from either of these levels is expected to show further gains or declines. To the downside, the next support below 112.04 comes in at 111.61 - 111.57 region. 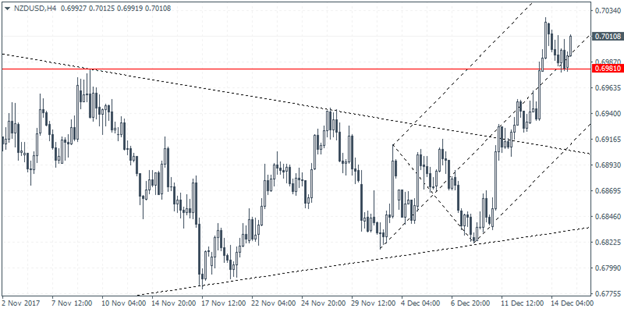 NZDUSD (0.7010): The New Zealand dollar was seen trading weaker yesterday. However, the declines were limited to the initial support level at 0.6891. Following the decline to this support, price action has posted a reversal. A close above the previous high is required in order for NZDUSD to extend the gains towards 0.7062 level of resistance. However, in the event of a failure to post fresh highs, NZDUSD could be at risk of breaking the support level. This could see price declining towards the next lower support at 0.6912.

Orbex
99 Followers
Orbex – Serving Traders ResponsiblyEstablished in 2011, Orbex was founded with a mission to serve its traders responsibly. And with that in mind, Orbex works diligently to provide its traders with access to the world’s largest and most liquid financial markets. The company offers multiple trading assets, including forex, indices, commodities, metals and stock CFDs, as well as highly competitive trading conditions and access to tier-1 bank liquidity. With a diligent customer support team to answer your every query, and a focus on research, analysis and enhanced security of client funds, Orbex upholds a reputation of seasoned expertise within the industry. Innovation at Every TurnA market leader in innovation and customer service, Orbex offers its traders highly competitive trading conditions, with fast execution of under 0.03 seconds per order, spreads starting from 0.0 pips, free VPS and leverage up to 1:500. This is in addition to an advanced selection of trading tools available on the industry’s favourite trading platform, MT4, both on desktop and mobile and for users of Windows, Mac, Android, and iOS. Traders can also benefit from daily trading signals and technical analysis reports via Trading Central, as well as the broker’s award-winning research team via the Orbex blog and social media channels. Investors of all trading styles are welcome, including scalpers, hedgers and fans of automated trading who can also select from a wide range of Expert Advisors, or create their own thanks to Orbex’s platform supporting fast EA development. With over 20 native support languages to assist you, an automated chat bot system to streamline response times, a robust FAQ center and a highly trained team of support specialists available 24/5, no matter your trading query, Orbex sets an industry example for stellar customer service and support. Click here to get in touch with Orbex.Trusted and RegulatedNot only is Orbex a trusted and award-winning broker, but it is also fully licensed by the Mauritius Financial Services Commission (FSC). Adhering to the strictest international regulations, Orbex has worked hard to consolidate its reputation as a trusted broker in the industry. This means offering their traders a secure trading experience, which includes but is not limited to, clients' funds segregation and the strict protection of data and personal information. When you combine this with the company's philosophy that encourages informed and responsible trading , and its status as an established source of valuable information, Orbex really stands out as the shining example of what it means to be a reliable broker. Education is Key Boasting an award-winning team of local and international investment researchers, Orbex focuses on offering traders of all levels the educational tools necessary to accompany every stage of their trading journey. From daily fundamental and technical analysis, to webinars, e-books, podcasts, videos and weekly reports, Orbex provides excellent educational material to suit every trader's needs. A leading provider in Elliott Wave research, Orbex analysis is frequently featured across global financial outlets, including Bloomberg, Refinitiv Eikon, and CNBC. Learn more about Orbex at https://www.orbex.com/en/
Follow