In 1966, a famous economist by the name of Paul Samuelson quoted “the stock market has forecast nine of the last five recessions”. His cheeky remark has echoed through time as a reminder that the stock market is a poor predictor of recessions. However, if we turn Paul’s quote on its head, we can refocus on something more useful – every economic recession has precipitated a crash in the stock market.

Therefore, if we can anticipate a recession with some numerical certainty, we can defend against a significant loss in portfolio value. The good news, it appears we’re under little threat of an economic recession over the next 12 months. The bad news, one may be lurking on the horizon based on the Fed's own recession model.

Let’s first differentiate between a correction and crash in the stock market. 10% corrections are unpredictable and common, but healthy for the stock market. For long term investors, corrections are simply a step back that allows us to regain footing before pushing forward again. Crashes meanwhile, are significant rotations out of stocks in light of meaningful economic contractions, or recessions. It’s these corrections that are the most lasting and painful.

So how do we numerically predict the timing and probability of a recession and what data will we need?

Fortunately, the Federal Reserve has already invested significant research, time and effort into answering these questions for us:

With many leading economic indicators, either individual variables or indices, analysts focus on the change or growth rate in the variable as a forecaster of future real economic conditions. In contrast, it is the level of the term spread - not the change - that helps forecast both recessions and changes in real economic activity… none seem to dominate the yield curve as a predictor of recessions.

What the Federal Reserve is referring to is the yield spread between long and short term debt. The following graphic shows results of the model the Fed developed based on the 10-yr and 3-month yield spreads. 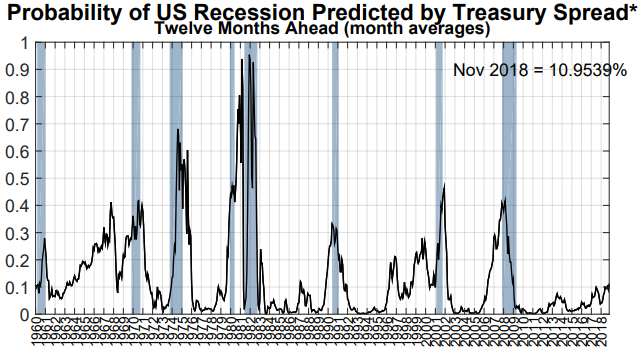 Thus far the model has predicted 9 of the last 8 recessions (even this model isn’t immune to some folly Mr. Samuelson) Because the model predicts 12 months into the future based on the current yield spread, we predict an 11% chance of recession at the end of next year. The 10-year Treasury and the 3-month Rate are situated at 2.35% and 1.25%, respectively, giving us a yield spread of +1.10. It is not until this yield spread inverts to negative that we should be concerned:

…since 1960, a yield curve inversion (as measured by the difference between ten-year and three-month Treasury rates) has preceded every recession on record.

The Fed has been very cautious on raising short term interest rates for fear of inverting the yield spread. They have forecast 3 rate hikes in 2018 and 2019 which will have a direct impact on the 3-month rate. The Fed also recently ended its QE program and announced that it will start deleveraging its balance sheet. This will have a slight impact on the 10-year Treasury yields from a demand perspective. The hope here is that the 10-year Treasury will rise with the 3-month Rate and prevent an inversion of the yield spread.

The Federal Reserve has forecast 3 rate hikes in 2018 and 2019. The most recent rate hike occurred this December before the end of the year, pushing 3-month interest rates to the 1.25% to 1.50% range. The following depicts the future projected rate hikes as forecasted by the Fed. This puts the December 2019 rate at the Fed’s long term target of 2.8%. 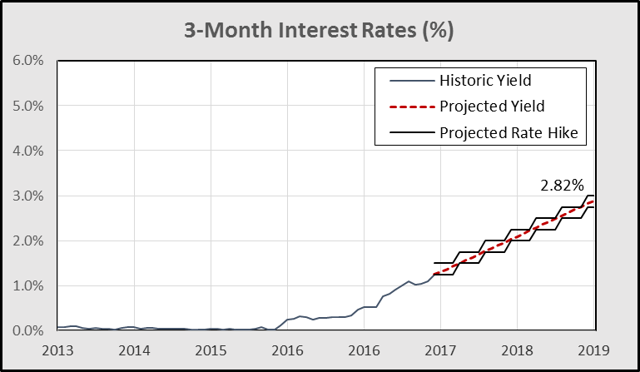 The 10-year Treasury bond yield is a bit trickier and requires some assumptions. Projections have been thrown around for 3% bond yields in 2019 from unwinding of the Fed’s balance sheet. QE created artificial demand for bonds, which has kept rates historically low. The unwinding of the Fed’s balance sheet will reduce this demand and allow rates to rise again. However, since the Fed announced it will not resell these bonds and instead allow them to expire, demand may be subdued and rates will likely rise only gradually over time.

These rates are also largely affected by inflation and credit risk. If inflation and risk increase, yields increase, and vice versa. Inflation has been historically low, likely caused by depressed margins in retail (low consumer costs – “cough” Amazon) and low prices for oil (low gas prices) which may not go away any time soon (separate discussion required on inflation). Therefore, inflation may not be a driver for noticeably higher yields anytime soon. 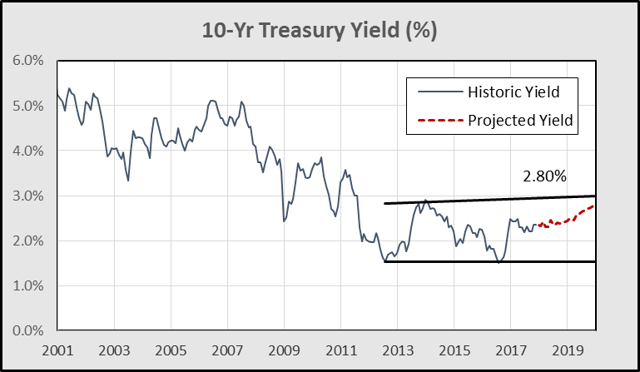 Reconstructing the Fed’s probit regression model with the forecast 3-month and 10-year Treasury Yields over time reveals a rising risk for recession of 32% by the end of year 2020. Based on the model and forecast data, the yield spread may invert in October of 2019 meaning a potential recession in late 2020. 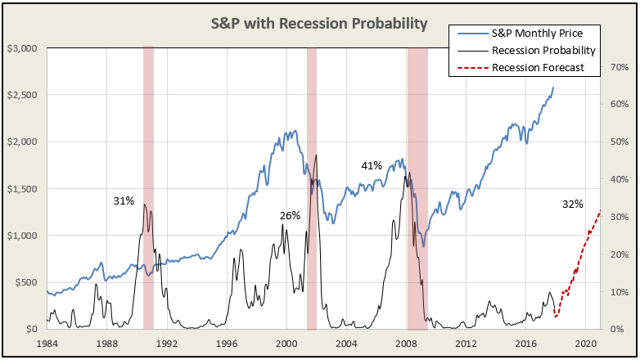 The following events can trigger a significant deviation from the forecast yield spread:

While it’s comforting to hear some certainty about the future, a 32% chance of recession in December 2020 should still be taken with a grain of salt. The only guarantee is that these assumptions will be wrong over time and the Fed may likely step in and adjust rates to avoid a yield inversion. Where this model really earns its keep is in providing a direction of the U.S. macro economy over the next few years. Regardless of opinion, I am keeping a close eye on yield spread as the Fed continues to adjust rates. Should the yield spread being to invert, I will likely begin rotating stocks into more defensive gold and bonds.

Eric Oetjen
730 Followers
Investor/trader looking for under appreciated stocks in strong performing sectors. Strong belief in using medium to long-term trends and recognizing low risk investments to increase odds of portfolio out-performance. High focus on the next wave of the technological revolution - automation, machine learning, and convenient consumerism. Will use discounted cash flows, macro trends and the current stage of the business cycle to recognize pockets of opportunities in the market. "A rising tide lifts all boats".. and some boats more than most
Follow