The Tax Reform Bill that seems all but certain to be passed includes a provision that is designed to curtail the use of debt to boost Shareholder Returns.

Currently, interest is deductible as an expense while dividends are not, so for many firms, it is accretive on a cash flow basis to borrow money to buy back stock.

For example, a large cap like Kimberly Clark (KMB) with a 3.2% dividend yield can borrow for 10 years at around 3.6%, but net of a tax deduction assumed to be 25%, the interest cost is only 2.7%. So every dollar of stock repurchased with 10 year debt would save 0.9% of cash flow annually.

This is a perverse since adding additional debt is encouraged since it benefits shareholders, but leaves the firm more leveraged and more risky which is undesirable systematically.

The actual provision limits deductibility of interest up to 30% of something called "Gross EBITDA" per the house version of the bill, which is very similar to EBITDA, because it is a proxy for pre tax income excluding all non cash items and before interest deduction.

So for interest to be deductible the following must be true.

Any interest in excess of that threshold is not deductible.

In theory this works well since a firm that is near the 30% threshold is likely employing relatively high leverage so this discourages them from borrowing more which increases their risk of bankruptcy.

The issue arrives when a firm's interest leverage ratio exceeds that 30% threshold unintentionally when it falls on hard times.

For example, say a retailer, as many are struggling now, had $1B of sales, Cost of Sales is 70% of sales and it has $250M of fixed expenses (things such as rent that cannot be changed in the short term), and no other expenses.

It has $500M of debt outstanding at a 5% average interest rate for an interest cost of $25M.

Assume no non-cash expenses for simplicity and since the new provision excludes these from interest ratio calculation.

This firm currently is profitable as it has the following:

The interest here is 25% of Gross EBITDA income so it can be fully deductible.

Now let's say this retailer is struggling because of Amazon disrupting the industry. Its sales drop 15%, which is not unheard of for a struggling retailer. Sears Holding Corp's (SHLD) sales have dropped much more than that from 2013-2015, for example.

Now its sales are

The rest of is presented below, with expenses subtracted in Red. 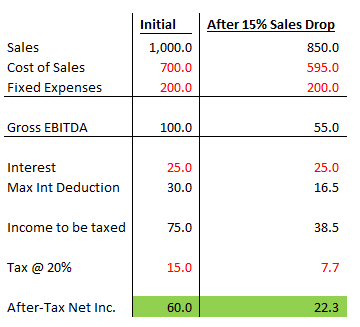 In this situation the company is penalized by having $8.5M of interest no longer deductible because it is struggling. That costs the firm $1.7M in additional taxes right when it saw its Gross EBITDA already plunge 45% from $100M to $55M.

Also, the effect of stripping interest deduction is often compounded by credit market reactions. As this firm's Gross EBITDA income plunges 45% from $100M to $55M in this example, it likely would receive a credit downgrade which would increase its interest expense going forward, thus increasing the burden from losing the interest deduction on additional interest. So the interest expense in this example may be understated which possibly understates the negative impact of this proposal. To clarify, if the company here gets a credit downgrade, and over time its interest expense grows from $25M as investors are more wary of lending the company money, then the impact of the limitation of interest deductibility will growth further, at the exact time the firm is struggling most.

The tax reform provision has good intentions of reducing the benefit of additional leverage by limiting tax deductibility of interest.

However, the provision has unintended consequence by hurting firms that are struggling by removing the interest deduction at times when they need it most--when their solvency is in question.

The fact that the provision would hurt struggling firms, likely only impacts firms with a junk rating and makes it more likely they may default on debts. In my opinion this proposal may be harmful and unnecessary since the market already discourages excessive leverage via credit rating agencies. Firms that are over leveraged get assigned worse credit ratings, which increase the cost of the associated debt which is a deterrent in itself.

This proposal just creates an additional penalty to these struggling firms which compounds the financial hurt they suffer in adverse times which increases probability of a default.

Additional Disclosure: The information contained in this article is an opinion and constitutes neither actionable investment advice nor a recommendation to trade any security.

Sovereign Investment Insight
595 Followers
I am primarily an equities investor whose foremost objective is growing income for retirement. My investment strategy concentrates on maximizing returns while minimizing risk. The Core component of the strategy is accumulating US Stocks. I also utilize options to enhance income and manage risk.I started investing in the stock market at the age of 15 in 2005. All my articles and comments are strictly my opinion and therefore do not constitute investment advice, and they do not constitute a recommendation to buy or sell any security.
Follow