As we showed in our recent quarterly letter, there are numerous parallels in the market today to 1929 and other historic market peaks. It is times like now, that the financial success story of Joseph P. Kennedy should be particularly inspiring. Joe Kennedy created great wealth in business and stock investments during the Roaring 20s. Recognizing that the market was overvalued and speculatively overbought, he protected his wealth by selling most of his stocks before the 1929 crash. He then compounded his fortune by selling short the US's largest companies from late 1929 to 1931. Among other successful moves, he compounded it again by buying depressed real estate during the Great Depression to become one of the wealthiest Americans of his time.

The truth is that it is a rare investor who possesses the fundamental grounding, independent thinking, and foresight to sell stocks ahead of an important market top. It's an even rarer one who has the conviction to go against the crowd and sells stocks short at that time. It's the rarest of investors who can capitalize on cyclical market turns in both directions. That is what Joe Kennedy did, and that is exactly what investors should strive to do, contrary to the herd, to increase their odds of long-term investing success.

In our recent quarterly letter, we laid out the proof of the record overvaluation of US stocks today across six different fundamental measures that comprise the totality of the income statement, cash flow statement, and balance sheet. We also showed why a host of macro indicators do not justify today's valuations. Below, is a seventh indicator that again shows the market at record highs, Warren Buffett's reputed favorite, total stock market cap to GDP. 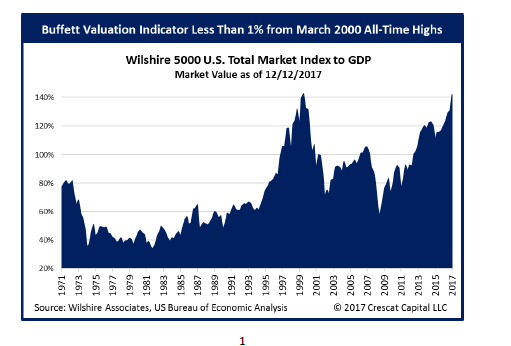 Why is this indicator just reaching record territory while our other six valuation indicators are well into record high territory? The numerator of Buffett indicator is the market cap of "all US public companies", but the denominator (GDP) includes the effects of all US companies, public and private. Since the prior peak of this indicator, the number of public companies has shrunk while the number of large private companies has increased. Today, we have enormous private equity valuations in companies like Uber, Airbnb and SpaceX and other so-called "unicorns" that are part of the denominator but not the numerator, depressing the overall ratio today compared to its 2000 peak. If we make a mental adjustment for this, we can easily see that the Buffett indicator today is in record overvaluation territory.

It's not just US stocks that are at historic valuations today. We are in a global central bank induced "everything bubble" that includes China currency and credit, real estate (particularly housing in China, Australia, and Canada), private equity, credit, and crypto currencies. When combined with record bullish sentiment factors and other catalysts, that make these bubbles extremely toppy and unsustainable right now, we must conclude that a severe financial market downturn is on the near-term horizon. As we have said, "Credit bubbles always burst". So, what is the one, most important, overriding catalyst that will prick the everything bubble? It is very simple: The Federal Reserve is in continued tightening mode. It is removing liquidity from the markets. You may have heard the phrase, "Don't fight the Fed". We think it applies now more than ever. Famed macro investor, Stanley Druckenmiller, said it well:

"Earnings don't move the overall market; it's the Federal Reserve Board… focus on the central banks and focus on the movement of liquidity… most people in the market are looking for earnings and conventional measures. It's liquidity that moves markets."

We put a lot more faith in Druckenmiller's wisdom than in all the overwhelmingly rampant bullish pundits today whose optimism is yet another sign of an historic market top. By the way, China, which has the largest central bank in the world and perhaps the biggest credit bubble of all time, is also in a continued credit clampdown and central bank tightening.

The macro opportunities in the market today are among the best we have ever seen. Crescat's hedge funds are net short global equities and non-dollar currencies and positioned to capitalize on a coming downturn in many global financial markets. Meanwhile, our long-only, large cap strategy is sitting on record cash along with defensive and counter-cyclical long ideas to protect capital and take advantage of opportunities that will be coming our way.

Unfortunately, for the masses, few investors will possess the necessary fortitude to go counter to today's stampede of rapacious bulls. Astute would-be sellers, the likes of Joe Kennedy, will take note that the herd today is record net long stocks as well as record leveraged. It is also extremely late in the expansion phase of the business cycle with asset bubbles abounding. The profits to be harvested today by selling at overvalued prices are vast. The opportunities for future profits by selling short today are also the best we have ever seen. But history shows that such spoils are reserved for only a few intrepid sellers, the smart money, the money that sells before the market top when liquidity is still abundant and when economic and earnings fundamentals still appear strong.

Sellers need to leave at least some hope of future appreciation on the table for buyers, because once the big money starts selling in earnest, the downturn has already begun. Selling will feed on itself. Greed will turn to fear and panic. Buyers will evaporate. Forced margin selling will speed the decline. Many large investors today waiting for the uptrend in the market to conclusively show a breakdown before they sell. It is a very risky strategy, because there will be a lack of liquidity to sell into at that point. These technical wizards therefore are the investors who will be triggering the crash. We believe they will be selling at far lower prices than are bid in the market today.

Warren Buffett is one of the most successful investors living today and is no doubt one of the big and smart money set. Buffett has always had a good sense of when to raise cash and when to put it to work in a contrary way to the economic cycle and to general market sentiment. He is sitting on a record pile of cash today, typical for him at market tops. Holding some cash helps a lot, but it did not prevent Berkshire Hathaway and its shareholders from being dragged through three roughly 50% drawdowns (1973-1974, 1998-2000 and 2007-2009) on Buffett's path to great long-term success. Certainly, adding some short selling at key times could have improved Buffet's overall track record and softened some of those drawdowns. But who can argue with Warren Buffett's long-term track record! If anything, it is a great lesson in persevering through drawdowns that should be appreciated by anyone who hopes to achieve spectacular long-term investment results. Who doesn't wish they could go back in time and buy into Warren Buffett's biggest drawdowns? Imagine the regret of those investors who sold out during them.

Per the latest Forbes 400, Buffett is the third wealthiest American alive today. The second, Jeff Bezos, and his Amazon stock endured a 95% drawdown between 1999 and 2001! The first, Bill Gates, and his Microsoft, likewise has had many drawdowns.

The other great lesson from Warren Buffett's track record is that it is legitimate. If anyone's long-term track record of investing in the stock market does not show reasonable drawdowns, it very likely a fraud. The Madoffs of the world proved that to us. Such track records tend to end abruptly and in complete wipeouts.

Whether in a long-only strategy or a hedge fund, drawdowns will happen for all great investors, particularly all great equity-oriented value investors. The reason is that stock prices must legally be marked to market daily without any regard to true underlying value. The good news is that it is this market movement that creates tremendous opportunities for value investors to exercise their craft.
Crescat's short book in our hedge funds, we believe, is trading at a substantial premium to its underlying value today. We have had drawdowns before, and we have had much bigger runups. We pay strict adherence to downside risk controls. We are very confident that we will have much bigger runups than drawdowns again in the future to justify the risks that we are taking. We are very proud of our long-term track record across all three Crescat strategies and aim for it to be among the best in the industry.

At Crescat, we are not just fundamental value investors, we employ a multi-disciplinary strategy that includes quant and macro thematic. We capitalized very well on the housing bust and global financial crisis in 2007 and 2008, macro themes that we identified wrote about in advance in our letters. If you haven't seen it yet, we hope you will refer to our research letter that we wrote in late 2006. Soon thereafter, we gained 150% over 18 months while other managers and investors faltered. Note also our recent success in 2014 through early 2015 when oil markets and China first started to crack. These windows provide a glimpse into Crescat's ability to deliver strong performance, uncorrelated to other managers, in macro-driven market downturns. This is the opportunity that is in front of us today. We highlight these periods because they are strong evidence that we have been successful at correctly identifying economic imbalances that others seemed to have missed. Please see performance during these and other periods across the various Crescat strategies in the charts further below. The charts show how we capitalized on key macro themes in the past.

All three Crescat strategies are now in the black in December month-to-date. We are optimistic as always that it is the beginning of a new substantial runup in our hedge funds and doing everything in our power to make it so. The time to sell stocks before an historic market top is running out fast. The China credit bust appears finally beginning to unfold. It is not too late to sell wildly overvalued stocks. And, there may never be a better time to sell them short. For qualified investors, we strongly encourage you to consider an allocation to Crescat's hedge funds now, before the month-end window closes.

ValueWalk
4.85K Followers
Everything hedge funds and value investing NOTE we do not read comments or direct messages on SeekingAlpha- please contact us via email if this is important
Follow
7 Comments